Published October 17th, 2021 - 06:46 GMT
Beyt Garden Café Pizza Chef Roni Najjar preparing a pizza in the kitchen of the café. Pizzas make up the majority of the food menu at the café, and Algelany said this became the case over time out of a desire to serve more food to customers while working around limited kitchen space. Photo by Payton Bruni

A sign for Beyt Garden Café, located in the Mar Mikhael neighborhood of Beirut, pointing people on the street to the stairway leading to the café. Beyt Garden Café, like many other restaurants and businesses in Lebanon, has struggled to get by as a fuel shortage cripples the country and leaves many without electricity. A manager with the café, Karima Algelany, said they’ve had to work with private generator owners to keep the lights on and the business running.

“By the end of the month we have three different electricity bills to pay and of course it’s a huge toll on the business,” Algelany said. “It’s easy to surrender and close our doors but we don’t want to get to that level, so we’ve been trying to keep things going even if it’s a little bit challenging.” Photo by Payton Bruni 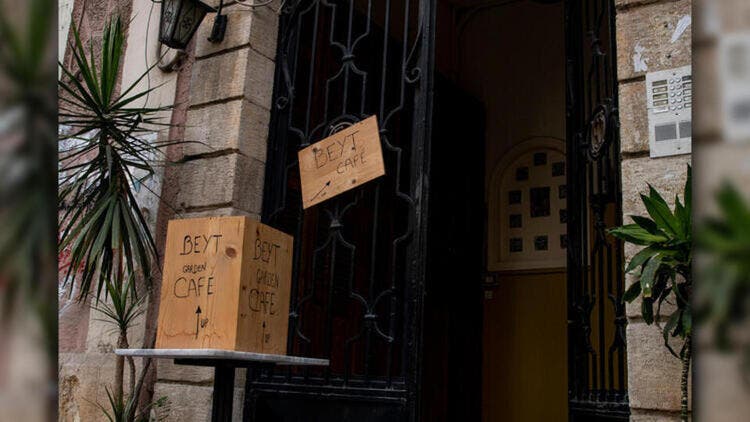 A customer eating in the garden section of Beyt Garden Café. Algelany said people are welcome to sit in the garden and enjoy it as a free public space to unwind from the stresses of living without power. She said, “Even if we don’t have electricity, it’s better to be in a big open space with a garden than locked in your home. We’re aware of that and that’s why we don’t close even during the power cuts, and we tell people you can enjoy the space as much as you want.” Photo by Payton Bruni 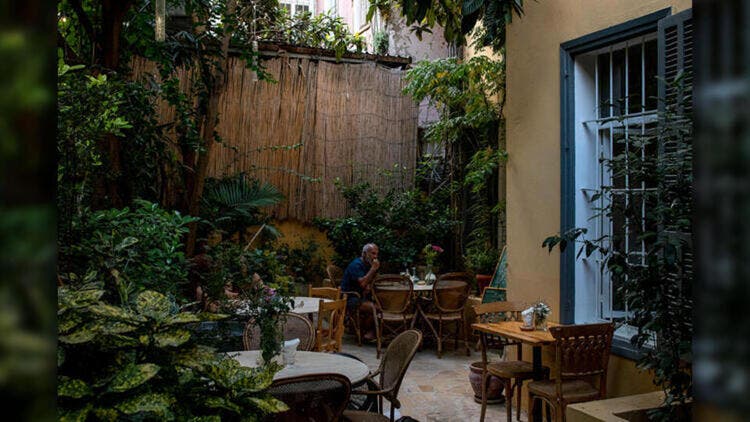 Beyt Garden Café Manager Ali Othman walking with a plate indoors while there is a power outage at the café. Algelany said even with three sources of electricity, one from the government and two from private generator owners, the power outages are unpredictable and there’s an average of five hours a day where there’s no electricity in the building. Photo by Payton Bruni 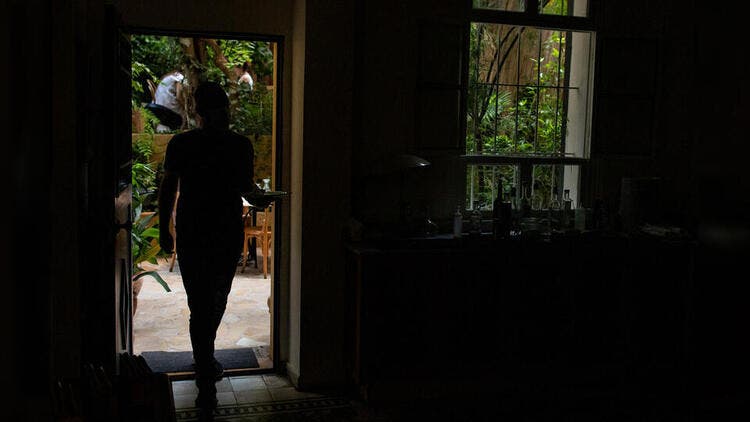 Othman walking past a customer seated in the main room of the café. During power outages, natural lighting from outside provides enough light for people to sit and enjoy the café’s indoor areas. Photo by Payton Bruni 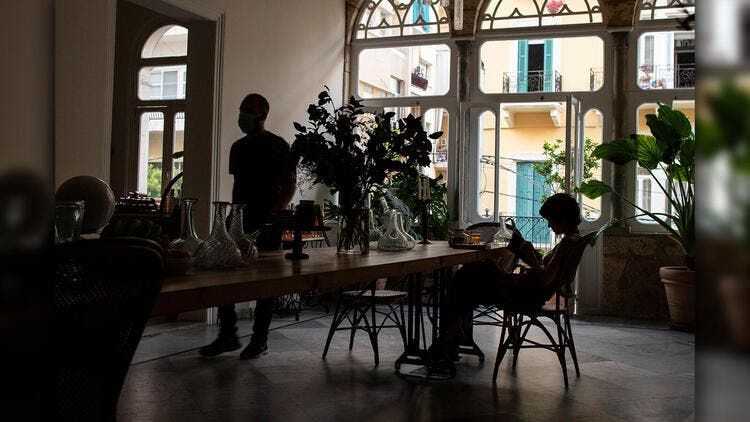 Beyt Garden Café Pizza Chef Roni Najjar preparing a pizza in the kitchen of the café. Pizzas make up the majority of the food menu at the café, and Algelany said this became the case over time out of a desire to serve more food to customers while working around limited kitchen space. Photo by Payton Bruni 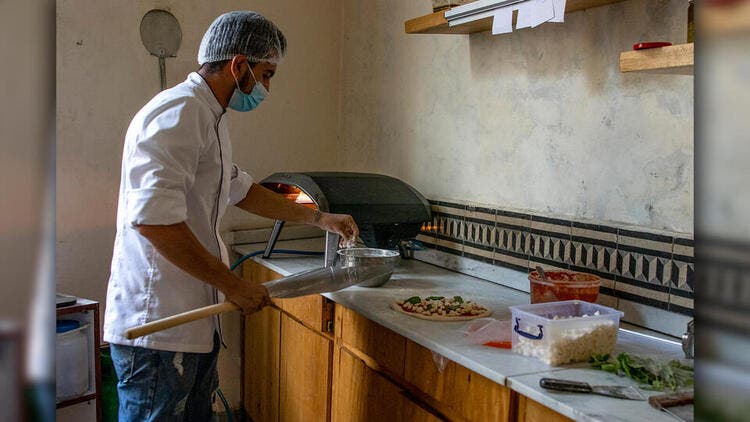 A pizza baking in the gas-powered oven at Beyt Garden Café. Algelany said the pizzas are distinctly Lebanese rather than Italian with all the ingredients used being local and made in Lebanon. She said the ingredients are always fresh and this is partly due to necessity as limited electricity means limited time for refrigerators to run. “To avoid hazards we don’t keep stocks of dairy or anything that can perish easily. We’re purchasing almost day by day to keep everything fresh,” Algelany said. Photo by Payton Bruni 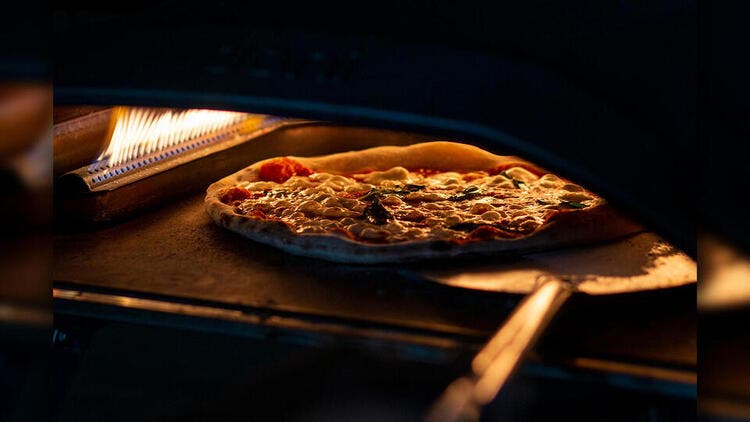 Najjar plating a finished pizza in the café kitchen. Pizzas are the staple on the menu, but Algelany said items previously on the menu like ice-cream had to be cut due to the power and fuel shortage. She said, “If there is a need to remove one item from the menu because it can get tricky, we’re ready to do that and we’ve done it already.” Photo by Payton Bruni 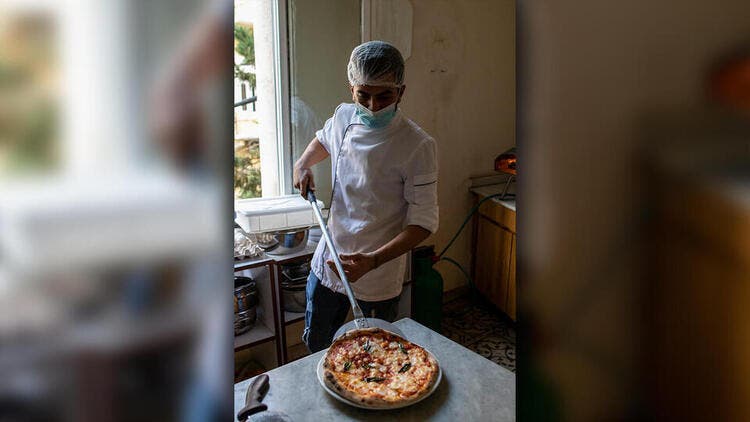 Othman opening a window to let in more light and fresh air during a power outage at the café. Algelany said that while the café building was not severely damaged by the port blast that took place in Beirut over a year ago on August 4, 2020, the windows were completely shattered and much of the interior was damaged. She said the blast was yet another challenge the café had to overcome. Photo by Payton Bruni 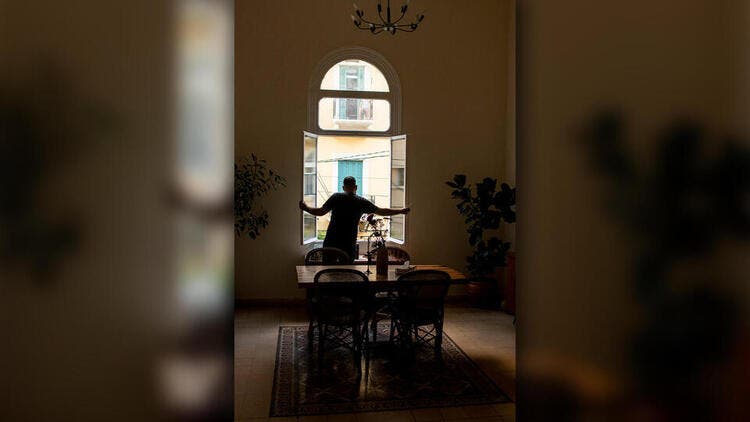 Othman lighting candles while wearing a mask inside the café. Between the COVID-19 pandemic, the port blast and fuel shortage, Algelany said Beyt Garden Café has been forced to persevere through many challenges, but the people behind the business still had hope. “If we and the businesses in Mar Mikhael have survived all of what happened, I think we’ve already proven to be very agile,” she said. Photo by Payton Bruni 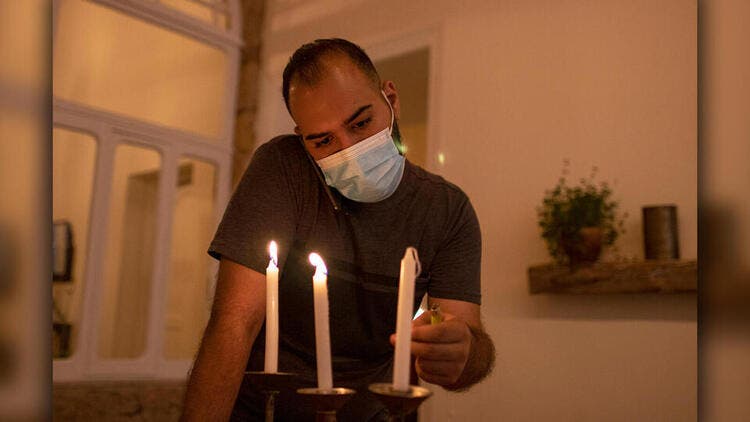 A customer charging her laptop at a lounging area in the café. Algelany said despite the difficulties in keeping Beyt Garden Café open, everyone behind the café was determined to keep it running and viewed the business as a service to the public. “We think that people need this space to de-stress and talk about their daily problems. You know how much people have been going through psychologically, like one hit after another, so it’s important to have places like this for people to get together.” Photo by Payton Bruni 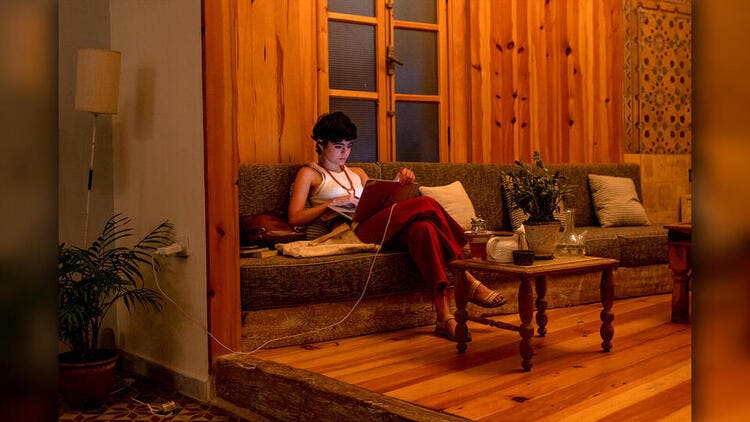