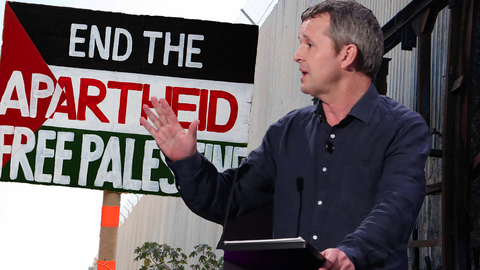 Viačorka shared the video on Twitter and wrote: “I’d believe that in Russia support for the war against Ukraine is 70%. In this video, thousand young people in "Putin's team" T-shirts greet Putin.”

I’d believe that in Russia support for the war against 🇺🇦 is 70%. In this video, thousand young people in "Putin's team" T-shirts greet Putin.

And in Belarus the situation is opposite. No support for the war. Polls show max 11%. Don’t put Belarus and Russia in the same basket pic.twitter.com/eDUQpEUpAH

He also claimed that in Belarus a poll revealed that non-supporters for the Russian invasion of Ukraine and the war accounted for about 11% only. The advisor urged the nation not to compare Russia and Belarus.

Various reactions were shared online about the video as some called that the young people were brainwashed by pro-Russian authorities. One person said: “Putin should start denazification by himself.”

While another person commented saying: “These people are not representative of the entire Russian population. Saying so breeds hatred.”

This is scary stuff https://t.co/VwgMTaX95e

On the other hand, since the declaration of invasion thousands of people have taken to the streets in Russia to protest their country's decision to start a war in Ukraine. A protest monitor said that at least 1,100 people were arrested during Sunday rallies across 35 cities.

After an 11-day war, the United Nations released a report that over 1.5 million people have fled Ukraine since the start of the Invasion. According to the UN, the number of refugees is estimated to reach 4 million.

On February 24th, Russian President Vladimir Putin announced a ‘special military operation’ in Ukraine. So far, an estimated 351 civilians have been killed since the invasion.