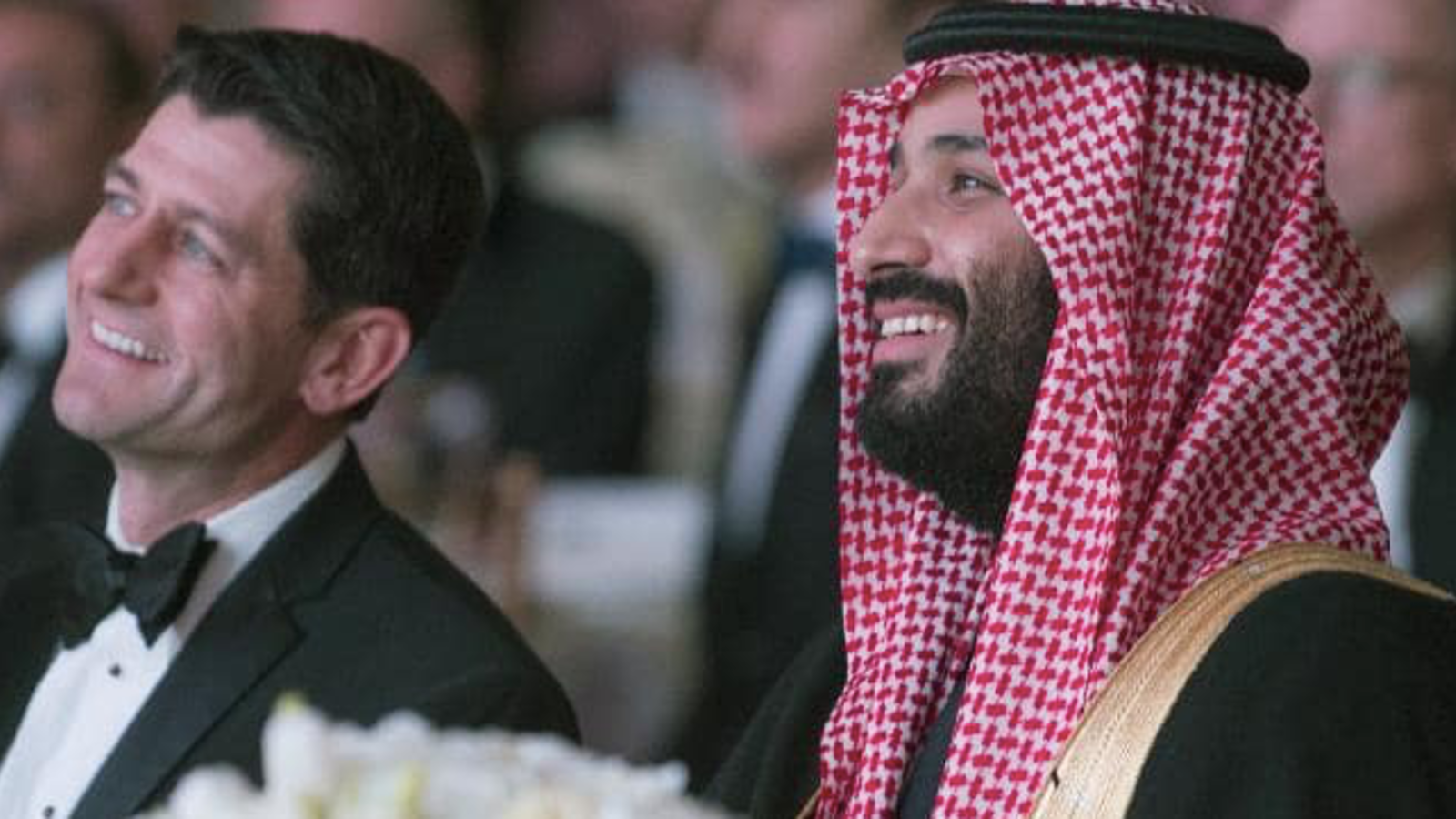 Could this be goodbyes to ‘old policies’ and a hello to new ones? (AFP/File Photo)

In his latest outing in front of the world’s media, Crown Prince Mohammed Bin Salman has again demonstrated his power to make political waves with very few words. Conducted by Jeffrey Goldberg of The Atlantic, the new interview is a more interesting product than most of the softball questionings the Prince has been given so far. Goldberg pushed him on the uncomfortable subjects of Yemen and human rights further than most, and persistently demanded the Prince clarify what he means.

Prince Mohammed, for his part, stepped up to the mark. Though he couldn’t resist a dubious Hitler analogy, he displayed a knack for side-stepping hard questions with relativizing logic. By highlighting the West’s complicity in many a dubious Saudi foreign venture, he successfully dented any implied claims to the moral high ground.

But the feature of the interview most seized on by the press was Prince Mohammed’s comments on Israel. A number of headlines followed the interview, proclaiming that the Prince had “recognised Israel’s right to exist”. When asked by Goldberg whether he thought the Jewish people had the right to a nation-state in their ancestral homeland, the Prince said:

“I believe that each people, anywhere, has a right to live in their peaceful nation. I believe the Palestinians and Israelis have the right to have their own land.”

Just how much of a shift this actually represents in Saudi policy is debatable. The Atlantic article suggests that this is a departure from previous positions because Prince Mohammed is talking of rights, rather than a mere acknowledgement of Israel’s existence. But this is subject to some caveats. Grace Wermenbol, a specialist on Israel-Palestine at Oxford University, told Al Bawaba:

“Although Mohammed Bin Salman’s acknowledgement of Israel’s right to “their own land” can be considered a historic shift in the rhetoric of the kingdom, it is important to remember that public recognition of Israel’s right to exist, at least implicitly, preceded Prince Mohammed’s rise to power. Saudi Arabia acknowledged Israel’s right to exist in 2002, as the Saudi-sponsored Arab Peace Plan presented in that same year offered a full normalization of ties with Israel provided an independent Palestinian state would be established.”

The Prince’s comments thus might not represent a huge practical shift from past Saudi positions. But symbolically, they are the most overt signal yet of a so-far unspoken truth - that Saudi-Israeli ties are strengthening, and that diplomatic relations may be on the horizon. Prince Mohammed hinted at as much in the interview, saying that:

“Israel is a big economy compared to their size and it’s a growing economy, and of course there are lots of interests we share with Israel, and if there is peace, there would be a lot of interest between Israel and the Gulf Cooperation Council countries and countries like Egypt and Jordan.”

The Prince did clarify that establishing diplomatic relations with Israel would still have to be preceded by a peace settlement with Palestine. But the fact that Israel and Saudi Arabia are increasingly cooperative has been evidenced in a number of ways already. Saudi Arabia appears to be lifting the ban on use of its airspace for flights to Israel. It has previously had a retired Saudi general visit Tel Aviv to promote the Arab Peace Initiative. And more controversially, it is widely reported that Riyadh is pushing countries opposed to the new phase of the American-led Israeli-Palestinian peace agreement to change their position.

A ‘Swipe’ at Iran

So do these comments mean that, for the Crown Prince, cooperation with Israel and America against Iran is worth abandoning solidarity with Palestine for? Grace Wermenbol continued:

“These comments by Prince Mohammed come at a particularly low point in relations between the Crown Prince and Mahmoud Abbas, the Palestinian leader. Saudi Arabia – together with Egypt – appear to favor Abbas’ rival, Mohammed Dahlan, as the principal candidate to succeed the Fatah leader. Prince Mohammed also unsuccessfully attempted to garner Abbas’ support for the highly-anticipated US peace plan. For the marginalized Palestinian president, the crown prince’s latest indication of rapprochement therefore will be deemed further testimony that the kingdom’s firm commitment to the Palestinian cause under his leadership is a thing of the past.”

This is not to say that the Prince is abandoning the cause of Palestinian statehood entirely. Shortly after the interview, his father King Salman was forced to clarify “the kingdom's steadfast position towards the Palestinian issue and the legitimate rights of the Palestinian people to an independent state with Jerusalem as its capital.” However, if rumours about what the new American-led peace plan consists of are to be believed, and if Riyadh continues to push for regional acceptance of it, then the Palestinians are unlikely to appreciate this distinction.

It comes down to the question of Jerusalem. Whilst King Salman has reaffirmed Saudi commitment to a Palestinian state with Jerusalem as its capital, Trump has repeatedly said that Jerusalem is “off the table” for Palestine ever since he recognised it as Israel’s capital late last year. Riyadh is not publicising the pressure that the Crown Prince is applying in some diplomatic circles to try and elicit support for the US peace plan. But nor is the Prince appearing particularly even-handed towards Israel and Palestine. Goldberg noted in the interview that the Prince “did not have a bad word to say” about Israel, and this was at the same time as the violent clashes in Gaza during protests over the right of return, which left sixteen Palestinians dead.

The Prince may yet shift his position, but for now he appears to think that a strategic alliance with Israel and America against Iran is an end that justifies all means. He has already shown a willingness to make radical changes to traditional Saudi positions, and if the Saudi stance on Jerusalem proves detrimental to his ambitions against Iran, there is little reason to believe he will maintain it.

As King Salman’s statement shows, Prince Mohammed still cannot act completely unilaterally. But he can continue to exercise his considerable influence, and shift the bounds of the previously unthinkable for Saudi Arabia. For now, it will be an uphill battle for the Prince to regain favour in Palestine.

The views expressed in this article don’t necessarily reflect the views of Al Bawaba News.