Arabs Will Likely Keep Their Eyes on The US Elections Now 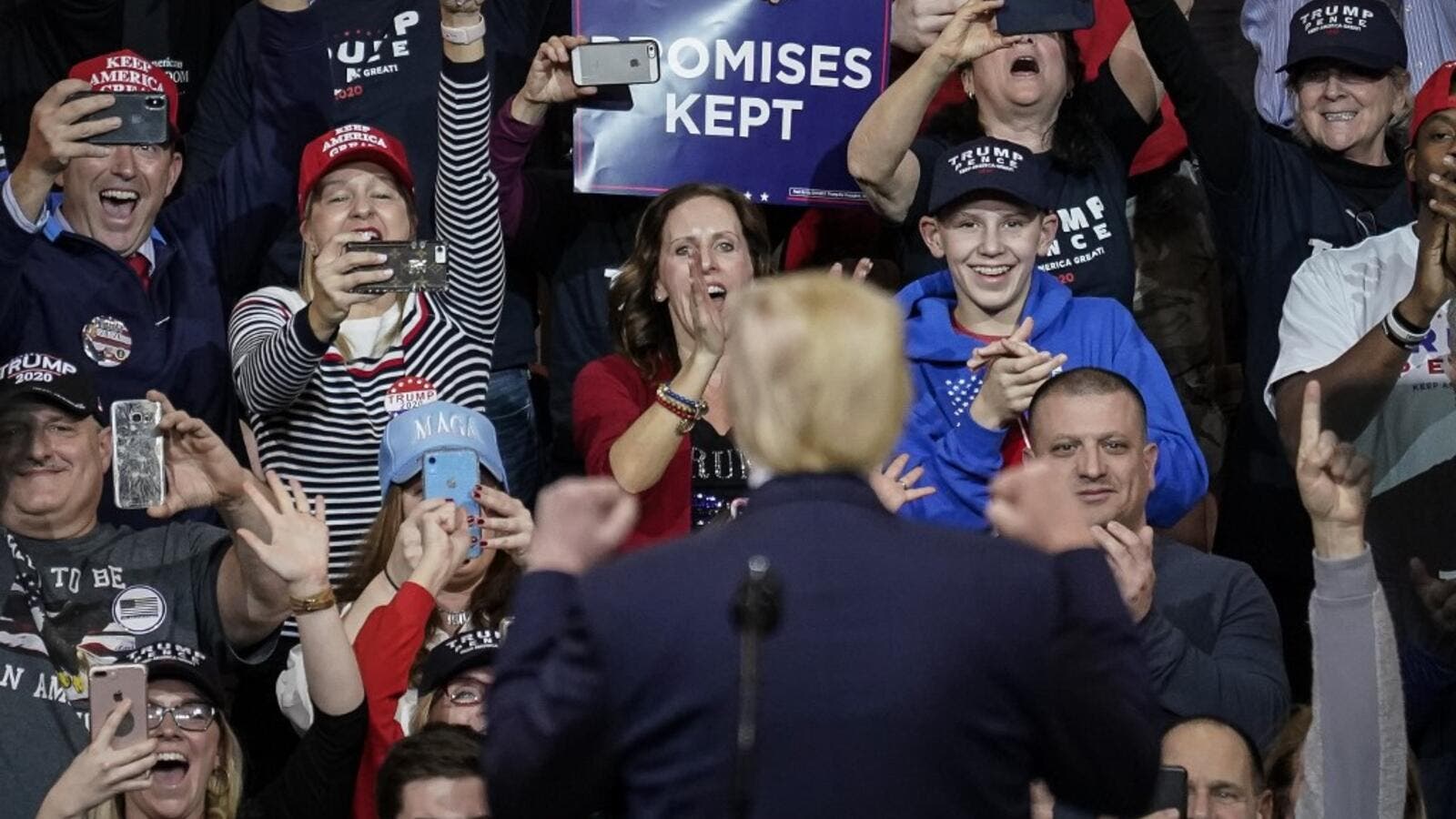 Supporters cheer as U.S. President Donald Trump arrives for a "Keep America Great" rally at Southern New Hampshire University Arena on February 10, 2020 in Manchester, New Hampshire. New Hampshire will hold its first in the national primary on Tuesday. Drew Angerer/Getty Images/AFP
Highlights
US president's State of the Union address along with his victory in the Senate impeachment vote both have made him the first and best option for the Americans to be reelected.

Many Middle Easterners - Arabs, Jews, Turks, Persians and Kurds - are inquisitive about who will be the next American president. The fact is that whoever he or she may will deal with the key unsettled disputes in the Middle East-North Africa region amidst expectations that President Donald Trump will be reelected.

Regardless of whether the coming president is Republican or Democrat, Washington would be deemed by some people of the Middle East and North Africa as domineering interventionist while others would label the US as populist isolationist, balancing out its policies with both Iranians, the Jews and Arabs.

As said in literature: The past is prologue, in politics the present is dialogue, and the future is American policy vis-à-vis a turbulent Middle East is based on liberal interventionism that is based on concerned countries’ requests and interests away from historical considerations. However, the announcement of the Deal of the Century just weeks before the Israeli parliamentary elections is meant to give a message that the American policy is changing to promote a broader Israeli state and a sub-state for the Palestinians.

On February 5, US president Donald Trump’s State of the Union address along with his victory in the Senate impeachment vote both have made him the first and best option for the Americans to be reelected. Trump’s address is a manifesto that draws up the key points of his policies in the coming period.

His speech and his victory in the impeachment process are a pre-election win. The address meant to create an impression that his presidency is continuous with potentials of prosperity and progress for the US and its people in various fields. For many Americans, what Trump has promised them he has fulfilled: their income is growing, crime rates are decreasing, the economy is improving and unemployment is dropping.

Most Americans are satisfied with Trump's economic policies. A poll conducted on January 26-January 29, 2020 by CBS indicated a clear increase in the percentage of supporters of Trump's economic policies compared to the previous three years. Trump does not hesitate to repeat his economic achievements, referring to the signing of the amended free trade agreement with Canada and Mexico as a substitute for the "NAFTA agreement". In December last year, the White House issued a statement revealing that the new agreement with Canada and Mexico will create 176,000 jobs in addition to generating $68 billion.

On the other hand, President Trump has worked since the beginning of his presidency to implement the promises he has made during his election battle in 2016, and thus he has followed a path different from his predecessor Barack Obama, working hard to persuade America's allies in the region to accept more burdens of regional security.

Consequently, Trump has resisted the idea of interfering with significant military forces in the Middle East crises, especially in Iraq and Syria. His strategy has opened the door to correcting relations with these two countries, and thus correcting the imbalance that had been caused by Obama's policies. Through the past few years, Trump wanted to send a message to US allies that in the event of a crisis or conflict in the region, allies should not expect American forces to interfere in their favour or sacrifice American soldiers’ lives.

This message contradicts pressures the US administration makes every time the situation in the Middle East becomes tense, especially at the beginning of any Israeli aggression against an Arab country, as Washington found itself forced to take a quick action to prevent the situation from deteriorating into military clashes.

In the coming few months, Trump will continue rejecting any rapprochement with Iran unless Tehran changes its ideologies, strategies and policies in the region; whether the nuclear ambitions or the ballistic missiles technologies, insisting to remove Iran from Syria and Iraq in a bid to change its behaviour towards neighbouring Arab states.

Following the first months of his presidency, Trump gave indications that he was looking for a new strategic approach in the Middle East, through which the United States would regain its role in the region, and would respond to the growing threats after years of a total absence of international and Middle Eastern scenes.

The first indication of this approach had emerged from the importance that Trump attached to his first visit abroad, which took him to Saudi Arabia and Israel. However, the main turning point of American policy in the region was Trump's cancellation of the nuclear agreement with Iran. as he has been searching for an integrated strategy in which he would restore America's role in the Middle East, especially after active military participation in the war against Daesh in Iraq and Syria.

In short, the US under Trump, if reelected, would gear towards developing an integrated strategy to restore the American role in the Middle East, but on new foundations that build alliances; that is, the allies have to bear their share of the all military and security expenses. Trump understands the importance of keeping the door open with Iran. In the end, it seems clear that Trump has decided to take the United States forces out of the Middle East battles, based on political realism.

Shehab Al Makahleh is a columnist in The Jordan Times.