Bolton and The 'Unacceptable' Face of US Foreign Policy? 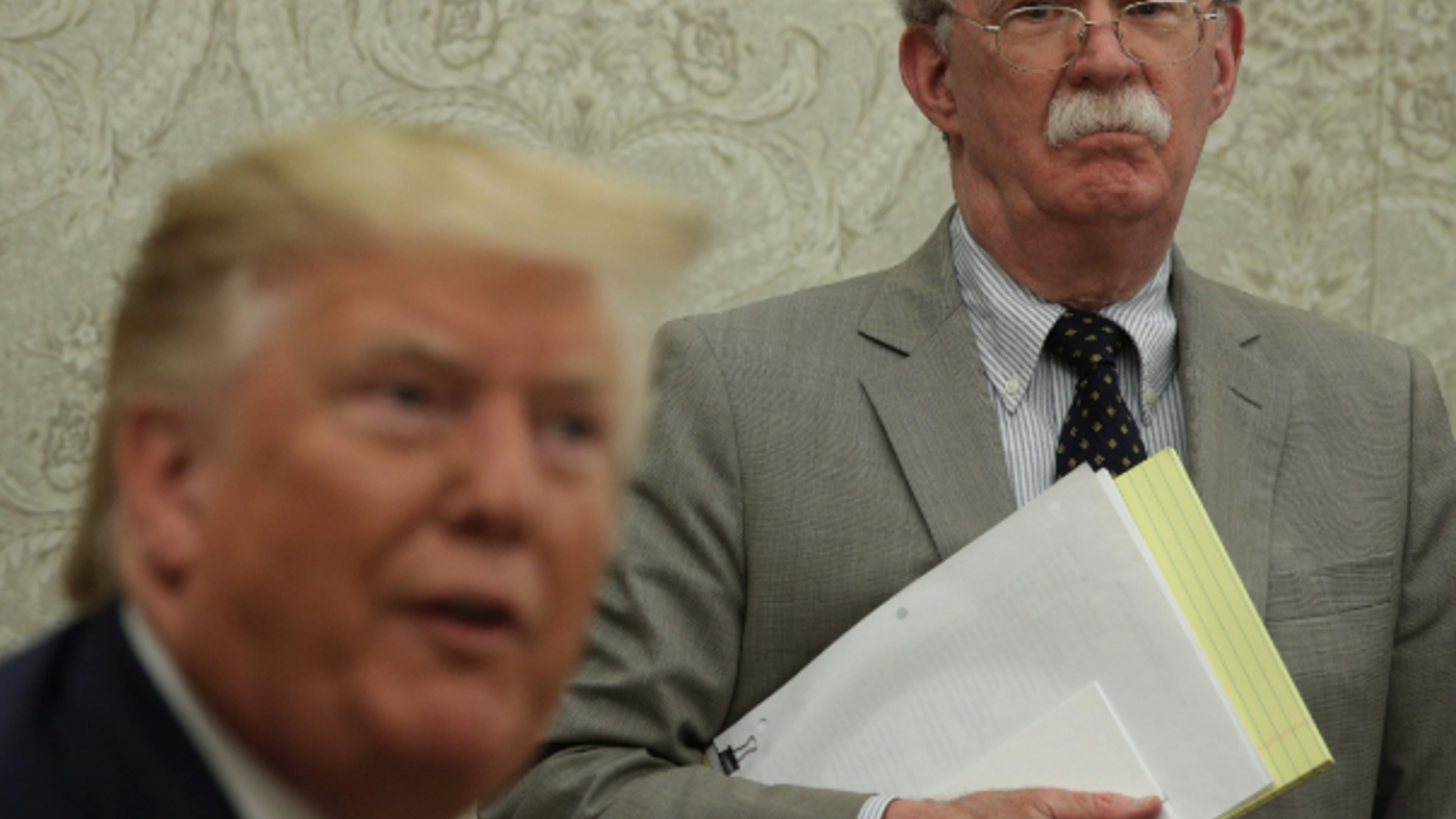 Trump (L), Bolton two faces of US foreign policy
Highlights
John Bolton's hawkish views became too much even for US President Donald Trump

To claim that the 45th and current president of the United States is unpredictable and full of surprises qualifies as the understatement of the 21st century.

Since his arrival at the White House on January 20, 2017, Donald J. Trump has confounded even the most experienced and reputable political analysts and pundits with his abrupt, confusing, and contradictory decision-making process. This is as he manages the political and economic affairs of a superpower whose daily decisions represent matters of life and death for millions of people across the globe.

Observing the Trump presidency, which is clearly unlike any other since World War II, is a dizzying process that leaves one in a constant state of perplexity, frantically groping for the most accessible rational explanation for the baffling events unfolding at the White House.

This was the case on Tuesday morning, September 10, as Trump announced to the nation and the world that he had fired his third national security advisor, John Bolton.

Resorting to Twitter, Trump declared that he had already informed Bolton the previous night that "his services are no longer needed at the White House." The president stated he would be announcing a replacement the following week.

Typically, there is a measure of controversy in everything related to this president, and Bolton's dismissal is no exception. He immediately contradicted the words of his former boss by insisting that he actually resigned and was not fired. Regardless of who is telling the truth, Bolton has now joined the ranks of the 66 senior Trump officials who were fired or resigned from office since 2017.

No surprise at all

Frankly, the news comes as little surprise to anyone familiar with the president's modus operandi or to those who watch closely the daily developments at the White House.

But three basic questions spring to mind: Why, why now, and why this crude lack of civility in announcing the dismissal?

Disagreements between Trump and his senior national security advisor are not new. But they have, of late, been accumulating at a swifter pace, reaching breaking point for two strong-willed personalities. Lacking a modicum of mutual respect or common purpose, the president explained, "He [Bolton] made some big mistakes…. John wasn't in line with what we were doing."

Furthermore, the presence of long-time hawk John Bolton at the White House since April 2018 was essentially a political "marriage of convenience" that was ultimately destined to fail.

Trump's Machiavellian and narcissistic nature clashed from day one with Bolton's hardcore ideological bent. The national security adviser's dismissal then, should not be surprising to any keen observer of American politics, particularly in the context of the Trump administration's internal dynamics.

The second baffling question in deciphering the Bolton firing is why now? After all, Trump and Bolton did not see eye to eye on so many different issues, including negotiations with North Korea, relations with Russia, the crisis in Venezuela, the war in Syria, imposing sanctions on Turkey, dealing with Iran's pursuit of nuclear power, and other vital national security issues.

Trump admitted as much in a recent tweet, justifying Bolton's dismissal because the president "disagreed strongly with many of his suggestions." In recent weeks, however, their clashes over the president's determination to withdraw US troops from Afghanistan and to plan a secret summit with Taliban representatives on September 8 at Camp David quickly became the proverbial straw that broke the camel's back.

The abrupt decision and intense anger displayed by the president did not actually emanate from the substance of his serious policy differences with Bolton over Afghanistan, or the idea of dealing directly with the Taliban. It was more likely directly related to the underhanded manner in which the national security advisor expressed his disagreements with the president.

This time, Bolton overplayed his hand by going public with his critical narrative of the Taliban talks conducted in Doha without his full knowledge, forcing the president to cancel the planned meeting with the Taliban at Camp David.

For Trump, leaking news to the mainstream media, particularly about internal deliberations and disagreements within the administration, emerged as an unforgivable and intolerable deal-breaker. CNN national security analyst Peter Bergen wrote that "John Bolton's defenestration was a long time coming" - that he essentially "got himself fired".

The precipitous and acrimonious tone of the announcement by Trump went beyond the customary disdain directed at disfavoured employees.

The demeanor of the president and his modus operandi raised eyebrows at home and abroad about the chaotic and unstable conduct of policy at the White House.

Former US diplomat Brett Bruen, who served as Director of Global Engagement at the Obama White House, quipped that "Trump seems to go through national security advisors faster than there are outfit changes at the Oscars."

He emphasised that "Protecting our country is about more than egos and who will deliver splashy summits. We desperately lack stability and strategy in our national security."

President Trump is certainly entitled to choose his own immediate staff, particularly his senior advisors. However, the frequent infighting and publicised dismissals of senior employees have diminished the stature of the White House and the credibility of its occupant.

It is noteworthy that Trump is the only US president in modern times to have four national security advisors in less than three years in office. The loss of 66 senior officials since 2017 depicts the White House as a revolving door, i.e., an unstable institution in the eyes of both domestic and international constituencies.

John Bolton was certainly not the most popular American political figure in the Middle East. The reaction to his humiliating firing was swift and harsh. His favourite target in the region, Iran, was the first to respond. Iranian spokesman Ali Rabiei, who called Bolton "the symbol of America's hawkish policies and its animosity toward Iran," speculated that his departure could lead to better treatment of Tehran by the Trump White House.

Iranian President Hassan Rouhani added that "Americans have to realise that warmongering and warmongers are not to their benefit."

Regarding the Palestinians, John Bolton has worked diligently throughout his political career to earn the enmity of the Palestinian Authority as well as its rank and file constituency.

He is well remembered by all Palestinians as their ultimate nemesis, one who persistently denied their national identity, national struggle, and inalienable rights. His name has been associated with the closure of the PLO office in Washington, the extension of Israeli sovereignty over the Golan Heights, the transfer of the US embassy to Jerusalem, and his continued reference to "the so-called state of Palestine."

His departure from office was broadly a welcomed development, although it was treated with cold indifference by the political establishment in Ramallah.

A prominent Palestinian leader privately characterised Bolton to this author as "a hysterical warmongering neocon" and described his firing as irrelevant, from a Palestinian perspective.

Ironically, the only official Palestinian response to the Bolton dismissal came from Hamas. Deputy Chairman of the Hamas Political Bureau Mousa Abu Marzook stated, "the dismissal of the American warmonger John Bolton from office will present another opportunity for regional powers to solve their problems through dialogue by avoiding damaging wars that reset the region backward for decades."

Meanwhile, Bolton's dismissal from office was broadly viewed in Israel as bad news for Benjamin Netanyahu, particularly in terms of his hawkish stand against Iran.

Former Israeli Defense Minister Moshe Ya'alon was quoted by i24 as stating, "We understand that [US President Donald] Trump doesn't want to go all the way to confront [Iran], he's now on the way to engaging them - that's why he fired John Bolton."

He added, "That's bad news for, I believe, Israel." Israeli commentator Noa Landau wrote in Haaretz: "The sacking of US National Security Adviser John Bolton, considered especially hawkish in the Iranian issue and the last obstacle before Trump's talks with the Iranian president, is a serious blow to Netanyahu's policy on the Iranian nuclear issue."