Published January 21st, 2020 - 07:09 GMT
Davos 2020 is split across seven key themes: Healthy futures, how to save the planet, better business, beyond geopolitics, technology for good, fairer economies, and society and the future of work. (Shutterstock)
Highlights
A large KSA contingent comprising 55 senior figures will be attending the WEF in Davos

Some 3,000 leaders from the worlds of business, public policy, culture and technology are due to arrive in the Alpine town of Davos for the annual meeting of the World Economic Forum (WEF), which begins Today.

The meeting this year — under the theme “stakeholders for a cohesive and sustainable world” — is the 50th time the annual meeting has been held in the Swiss resort, but it comes at a time of growing global tensions over climate change and geopolitical confrontation.

Last week, the WEF published its annual global risk report, one of the gloomiest ever, with global experts concerned about accelerating environmental damage and potential political flashpoints in several parts of the world.

Saudi Arabia is sending a top-level delegation to the meeting, headed by Dr. Ibrahim bin Abdulaziz Al-Assaf, Minister of State and Member of the Cabinet, with some 55 senior figures.

They include ministers and senior executives from industry, finance and the economy, in addition to many other Saudi participants attending for bilateral meetings and support roles, as well as the event’s legendary networking.

Relations between Saudi Arabia and the WEF have grown stronger as the Kingdom’s ambitious Vision 2030 strategy has accelerated.

Later this year, Riyadh will play host to a meeting of the WEF under the banner of the Centre for the Fourth Industrial Revolution, the brainchild of Klaus Schwab, WEF founder and executive chairman.

“On the eve of its G20 presidency, we welcome the Kingdom of Saudi Arabia … to shape those technologies in a way that serves society,” Schwab said.

In contrast with the strong participation from Saudi Arabia and other Gulf countries, notably the UAE, Iran has pulled out of the meeting altogether because of the heightened political tensions in the region following the killing of the country’s top general, Qassem Soleimani, in a US strike earlier this month. President Donald Trump is leading a big American delegation to the event, the second time he has attended Davos since moving into the White House, having missed last year. He is due to deliver a keynote address on the opening day of the meeting.

Climate change and its consequences look certain to be a big topic in snowy Davos, where the temperature rarely rises above freezing.

Greta Thunberg, the young environmental campaigner, is also taking part in sessions, including one on “averting a climate apocalypse.”

She has hiked over the Alps to get to Davos, having pledged not to use environmentally damaging public transport.

Davos 2020 is split across seven key themes: Healthy futures, how to save the planet, better business, beyond geopolitics, technology for good, fairer economies, and society and the future of work.

On climate change, the WEF said: “The Earth is getting hotter, the ice is melting, the oceans are rising, and they’re filling up with plastic. We’re losing species, building up greenhouse gases, and running out of time. It’s easy to feel downhearted.”

On rising geopolitical tensions, it added: “We need to move from geopolitics and international competition to a default of consummate global collaboration. Nations are going to have to change.”

In an effort to change the event’s image as a showy gathering of the global elite, often traveling in helicopters and limousines to the Alpine resort, the WEF has offered to pay half of the first-class rail fare from anywhere in the world to Davos. 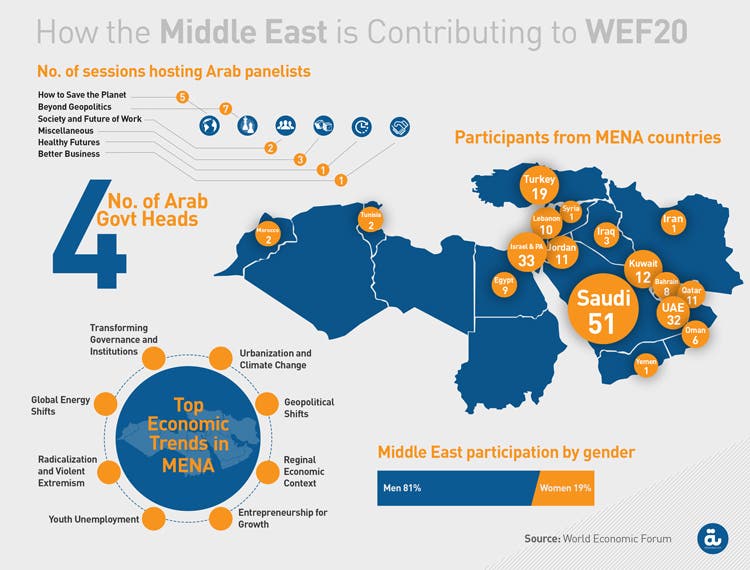