Multiple apps have recently come under fire for accessing smartphone features without permission and the latest service to get caught in the act is Instagram.

Apple's iOS 14 update shows a green icon on the control panel of an iPhone or iPad screen when an app attempts to infiltrate the camera in the background.

A user shared a screen shot of the notification on the control panel after scrolling through their Instagram feed – it is a round circle with the 'recorder indicator' in the center.

The notification feature is set to roll out with the new operating system later this year, but early adopters have spotted a number of apps quietly accessing clipboards, including TikTok, LinkedIn and Reddit. 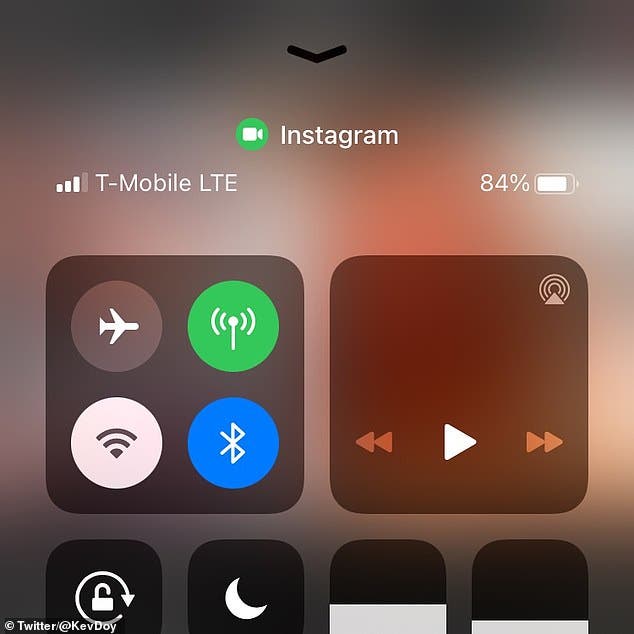 This version is far from polished, but allows users to poke around for bugs that may have gone unnoticed by the firm ahead of the official September launch and it is also revealing the 'evil' of some third party apps – as noted by a Twitter user regarding the news about Instagram.

Twitter user by the name of KevDov shared a screen shot on the platform showing Instagram had activated his iPhone camera while scrolling through the site.

'Casually browsing Instagram when suddenly the new iOS 14 camera/microphone indicator comes on. Then control pane ratted out the app behind it. This is going to change things,' he wrote in a tweet.

However, a spokesperson told The Verge that the incident was caused by a bug that the firm is working to correct.

We only access your camera when you tell us to — for example, when you swipe from Feed to Camera. We found and are fixing a bug in iOS 14 Beta that mistakenly indicates that some people are using the camera when they aren't,' the spokesperson said.

The new feature may change how many apps operate, as Instagram is not the first one to be ratted out by Apple's updated iOS 14.

A user recently found TikTok was accessing the clipboard on their device after the new operating system displayed a notification at the top of the screen.

A video shared on Twitter shows a user typing a comment in the app and every few seconds a banner alert appears, letting him know that TikTok has accessed his clipboard.

And LinkedIn and Reddit were also spotted doing the same earlier this month.

Both platforms said they would change the code in their apps that automatically copy clipboard information stored on people's phones after Apple's iOS update sheds light on the practice.

Touching Tribute to Late Father of Khabib Nurmagomedov Before UFC254