Published June 22nd, 2021 - 09:30 GMT
Payments a result of decision to raise the annual child tax credit to a maximum of $3,600 per child per year, from the previous limit of $2,000. (Shutterstock)
Highlights
Child tax credits of up to $300 per child per month will start to hit bank accounts on July 15

President Biden has unveiled his reformed child tax credits which will see American families paid up to $3,600 to help raise each of their children. 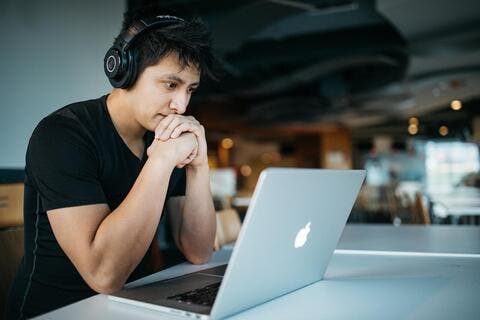 Your Guide to Unpaid Leaves in UAE During COVID-19

The raise, unveiled as part of Biden's $1.8 trillion American Families Rescue Plan, will see families with children aged under six receive a monthly payment of $300 per child - equivalent to $3,600 - in 2021.

Cash will automatically start hitting the bank accounts of families who have filed 2019 and 2020 federal taxes from July 15. Eligible families previously reclaimed the tax credit back when filing their annual taxes.

The initiative is intended to run for a year, and is intended to lift millions of children out of poverty, with Biden has spoke of extending it to 2025, and hopes it could be made permanent.

Child tax credits were previously capped at $2,000 per child per year. The Biden administration's raise represents an 80 per cent boost for children under six, and a 50 per cent increase in the child tax credit paid out to parents of children aged between six and 17.

Two parent families on a combined salary of up to $150,000 are eligible for the tax credit. Families with a single 'head of household' being paid up to $112,500 a year are also included. A head of household is an unmarried person who covers more than half their family's living costs, and lives with them for more than half of the year.

Single parents on salaries of up to $75,000 will be paid the new credits too.

Parents will get half the credit they are eligible for in 2021 and will be able to claim the rest back when completing this year's federal tax return.

President Biden tweeted that a family with two children could now take in $500 a month in tax credits - although the White House website suggests it could be even more.

It gives the example of a two-parent family with two children under six, and says they will take home $7,200 a year - equivalent to $300 per month per child, up from the $4,000 a year they'd have received under the previous system.

There is no indication that there is a limit on the number of children parents will receive the cash for. It also appears that each child in a family is eligible for the full amount - regardless of how many kids there are in a family.

'When more families know about how they can get the relief, that is how we will be able to lift our children out of poverty,' Harris said.

Harris had previously been designated Biden's 'Border Czar' but had come under criticism from Republicans for failing to actually visit the southern border.

With the child tax credits, the administration launched a website with details for potential recipients.

Usually, tax breaks for Americans with kids and dependents come one time a year – at tax times.

'This tax cut will give our nation's hardworking families with children a little more breathing room when it comes to putting food on the table, paying the bills, and making ends meet,'

President Biden said in a statement on Monday. 'Nearly every working family with children is going to feel this tax cut make a difference in their lives, and we need to spread the word so that all eligible families get the full credit.'

The program is slated to expire after one year, though Biden has proposed extending it through 2025 with the ultimate goal of making it permanent.

The child tax credit payments, which will reach millions of American households, including 88% of children in the country, could have a lasting impact in reducing childhood poverty and boosting future earning potential a White House official said.

The expanded credits could cost roughly $100 billion a year.

Estimates from the IRS suggest that 39 million households accounting for nearly 9 in 10 U.S. children are already set to receive the payments.

Biden's program received widespread support - but some Twitter users condemned it as wasteful and unfair.

Keith McLendon wrote: 'Printing and giving away money is going to only increase inflation even more. I know you don't understand this but your handlers should...'

A user called Donkey Kong added: 'This free money is one of the lucrative reasons children are used as tools in disingenuous divorces. I can’t support these measures because of the abuse they are open to and for which nothing is done to protect children and wrongfully disenfranchised parents.' 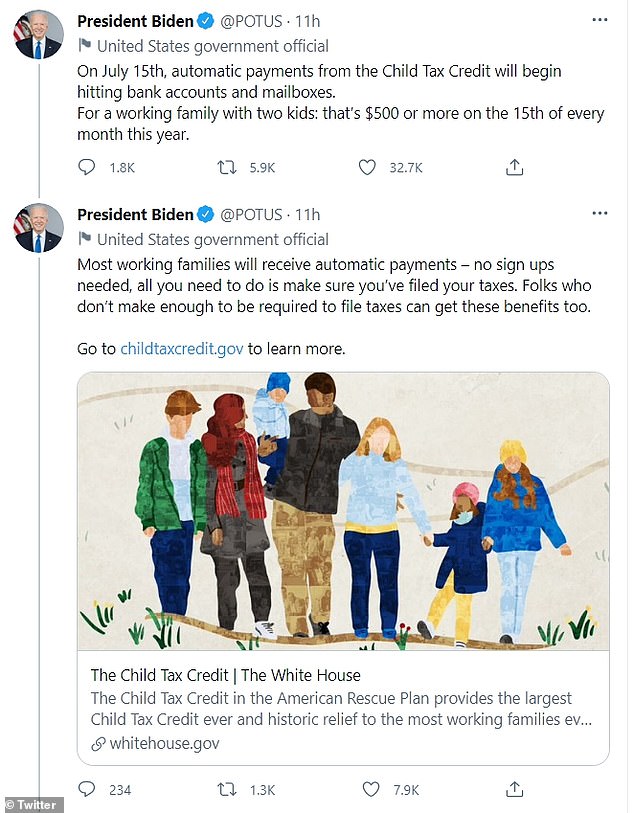 More than 65 million children nationwide – nearly 88 per cent of Americans under 17 – are set to receive the benefits without their parents needing to take any additional action.

This year, couples earning $150,000 or less can receive the full payments on the 15th of each month, in most cases by direct deposit, but some by paper check or debit cards. The highest benefits total $3,600 annually for children under 6 and $3,000 for those who are older.

The benefits diminish for individuals whose adjusted gross income is more than $75,000 or couples earning more than $150,000 – and the highest-income parents will receive none at all.

The IRS will determine eligibility based on the 2019 and 2020 tax years, but people will also be able to update their status through an online portal.

IRS officials will separately issue guidance for a paid leave tax credit, which would offset the cost to employers that offer paid sick and family leave because of events stemming from the coronavirus.

The credit would go to employers with fewer than 500 workers. The employers could receive as much as $17,110 for up to 10 days of paid sick leave and as many as 12 weeks of paid family leave.

REVEALED: How 60% of Americans may STILL have to pay more taxes under Biden's proposals (even with credits) - despite his promise hikes would NOT impact anyone earning under $400K

New analysis of President Biden's tax proposals has suggested that nearly 60 percent of Americans may still face bigger bills, despite his continued promise that no one earning less than $400,000 a year would be impacted.

The findings from the nonpartisan Tax Policy Center show that the majority of the burden would be placed on America's richest families - also known as the one-percenters - earning more than $800,000.

But low and middle-income families who have been told they would avoid a hike in rates may also have to pay extra. These tax bills may be offset by tax credits, but experts suggest that families earning between $75,000 and $500,000 may still get pinched.

This is not as a result of direct taxes on income but of the impact of the other hikes in rates, such as the corporate tax rise. 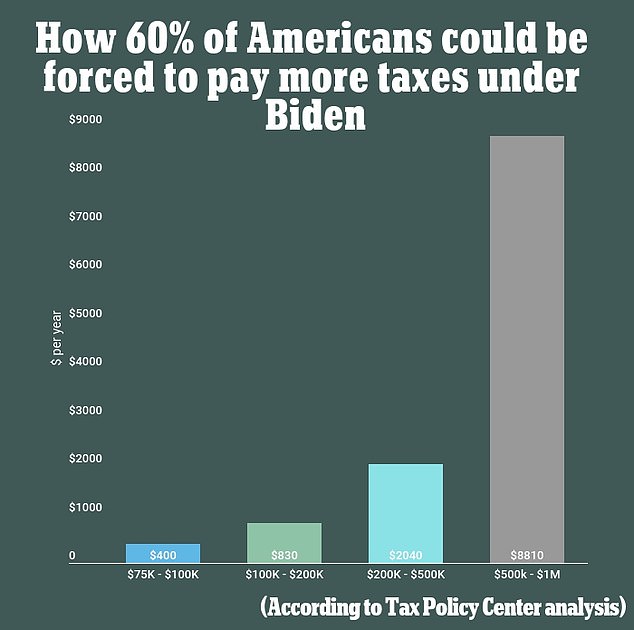 Three-quarters of households earning between $75,000 and $100,000 annually would face paying an additional $440 per year in taxes under Biden's tax hikes, according to the data released last week.

While Biden is not directly taxing Americans earning less than $400,000 a year, some small and middle income families will be hit indirectly through corporate tax hikes, lower investment earnings and shrinking compensation.

Many, however, could benefit from the wider rollout of child tax credits and earned income tax credit.

Howard Gleckman, a senior fellow at the Tax Policy Center, wrote: 'For those looking to see if Biden kept his promise to not raise taxes for those making $400,000 or less, the answer is: Mostly, but not entirely.

None of these proposals have been set in stone and would need to be signed into law by Congress before they are enacted.

The Biden administration, Democrats and Republicans are still negotiating to try and reach a deal on a final total for the package.

The Biden administration has insisted there will need to be tax hikes to pay for the final plan, which based on current talks between parties could be around $1.2trillion.

However the number could still decrease as the Democrats and White House look for a way to get it signed into law.

David Williams from the Taxpayers Protection Alliance told DailyMail.com that there is a 'lot to unpack' from the findings, but ultimately Americans at all income levels will feel the pinch.

'Biden is trying to play the class warfare game by raising corporate taxes and other business taxes that he says will only affect the wealthy. The truth is that these taxes will be felt by everybody,' he said.

The Biden administration is still negotiating with Republicans over the final price tag of the the president's infrastructure bill.

He started out with a $2trillion proposal, but since then he has shrunk the package with the latest figure suggested being $1.2trillion.

The tax hikes on the wealthy that headline the way to pay for the proposals has received strong pushback from Republicans who want to keep the tax cuts Donald Trump signed when in office. 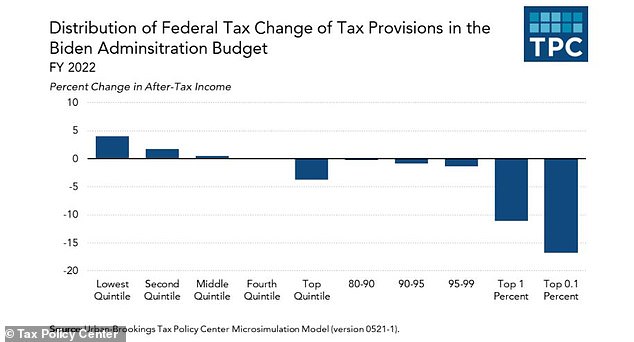 Under Trump's plans, only individuals making more than $518,401 pay the top marginal tax income rate of 37 percent. Couples would have to jointly earn $622,051.

Williams also pointed out that raising corporate taxes will mean higher prices for consumers in general because they pass on the increase rates.

'So, yes, technically raising the corporate rate is a tax on business so Biden can say that he didn’t raise taxes on the Middle Class, but realistically it will be the Middle Class paying the tax.

Williams is also concerned that the Obamacare 'penalty' Trump reversed could return following the Supreme Court's decision to keep the Affordable Care Act in place.

'There is a possibility that could come back which would mean that people at all income levels would be affected.'

He also explained that while credits may offset some of the hikes initially, it is a 'merry go-round'. 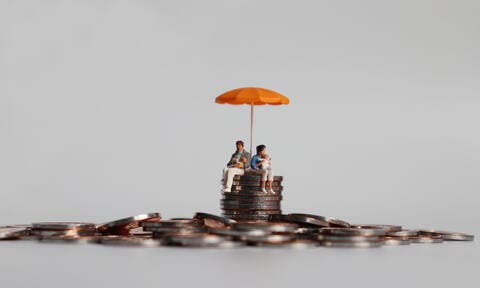 'Because it is refundable credit, the policy in itself will result in tax hikes, which in turn would have to be "offset', according to Biden's logic.

'It will be a tax hike for people without kids since they won't be eligible for tax credit. So, middle class couples or singles without kids will see a tax hike. It also unfairly punishes (many liberal) young people who want to work before having kids'.