As the world watched closely for the growing tensions between the United States and China, in the wake of US House Speaker Nancy Pelosi to Taiwan, the world's first and top chip maker TSMC expressed deep worried over what a conformation in the region could mean to the world of tech.

In an interview with CNN, the chair of Taiwan Semiconductor Manufacturing Company Limited TSMC, Mark Liu warned that a Chinese invasion of Taiwan following Nancy Pelosi's visit could shut down the world's "most advanced" chip-making factory.

Citing the sophistication of chip-making bedsides the industry's reliance on global supply chains, TSMC chair explained that his company can not be controlled by force. However, its operations could face major disruption in case of a military operation.

"Because this is such a sophisticated manufacturing facility, it depends on real-time connection with the outside world, with Europe, with Japan, with the U.S., from materials to chemicals to spare parts to engineering software and diagnosis". - Mark Liu

Mark Liu's remarks have highlighted the undervalued significance of the chip-manufacturing industry also known as Semiconductors to today's world because any possible shortage of production could lead to tremendous changes in the world's order.

For beginners, semiconductors or chips are the very essences of each device we use. Whether we are talking about computers, mobile phones, tablets, smartwatches, digital cameras, washing machines, TVs, microwave ovens, refrigerators... etc, chips are an integral part of operating every modern gadget.

If we dig deeper, we will realize that chips' importance is much more particular than devices we could abandon in an emergency. 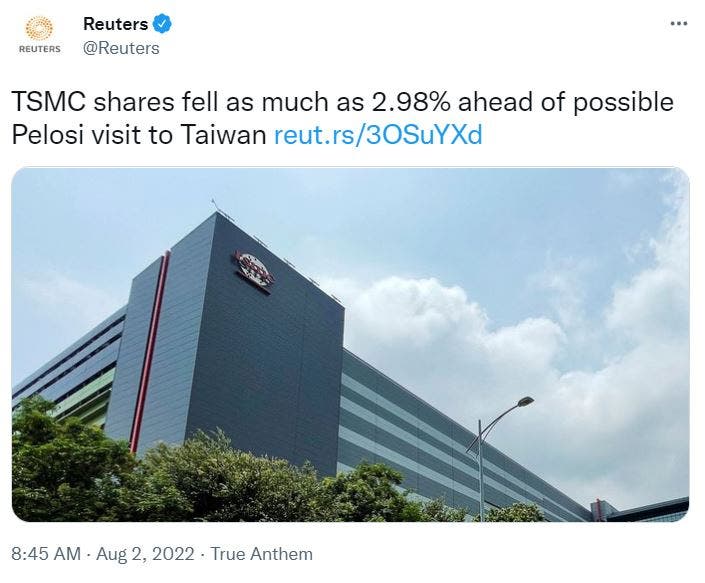 These examples show the vital role played by chips in almost every industry, including ones that can guarantee countries' sovereignty and public safety, and how any production disruptions can threaten the world order, which explains fears voiced by TSMC's chair.

The latest changes in chip production rates were the results of global supply-chain problems that emerged as the world lived through the COVID19 pandemic emergencies, in addition to the US sanctions on China, which limited leading global companies' ability to import affordable chips needed for different industries.

Consequently, the world watched as the prices of almost every device went up, from smartphones to cars. Another price hike is now feared in case China and Taiwan get into a military confrontation, particularly as Taiwan is home to the world's first and leading chip manufacturer; TSMC.

Founded by American-Taiwanese businessman Morris Chang in Hsinchu, Taiwan in 1987, TSMC is recognized as the world's first and leading manufacturer of chips and was listed for trade on the New York Stock Exchange under the symbol TSM in 1997.

According to the TSMC website, the company has served more than 535 customers and manufactured more than 12,302 products for "various applications covering a variety of end markets including smartphones, high-performance computing, the Internet of Things (IoT), automotive, and digital consumer electronics."