This week in the Crypto News Recap, UAE is on the right track to becoming a crypto powerhouse with new CBDC success and heavily investing in metaverse migration. Speaking of the metaverse, two Arab artists to perform in the first-ever avatar concert in the Arab world.

In even more exciting news, Saudi Neom is making a big bet on its growth in the metaverse, and Emirates Airlines is planning to utilize the metaverse potential to train new pilots.

Without further ado, let’s take a look at the major highlights of last week in the amazing world of crypto.

The Central Bank of the UAE announced the successful completion of the first CBDC pilot involving four jurisdictions and real-value transactions. The Bank of Thailand, the Central Bank of the United Arab Emirates, the People's Bank of China, the Hong Kong Monetary Authority (HKMA), and BIS are working together on the project. Twenty commercial banks from those locations also took part. 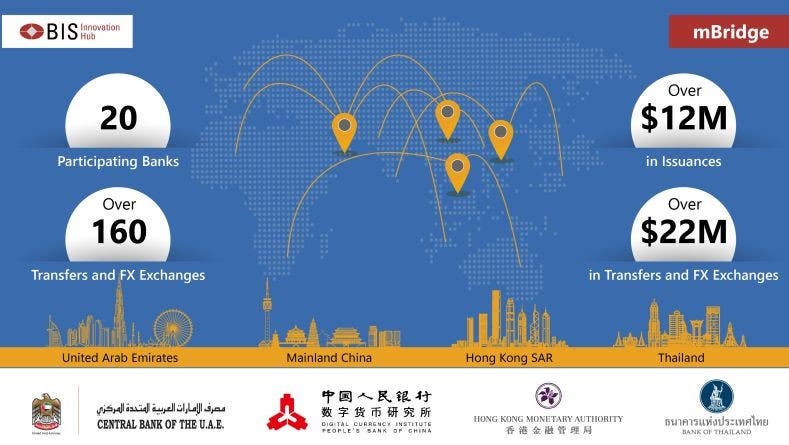 The trial took place from August 15 to September 23, 2022, on the mBridge Ledger, a custom-developed DLT platform. The 20 participating commercial banks utilized the platform to settle various payment types for corporate clients, with a focus on cross-border trade. More than 160 cross-border transfers and foreign exchange transactions worth more than $22 million (80 million AED) totaled over $12 million (44 million AED) in value. In October, a thorough status report will be made public, outlining technical design, legal, policy, and other regulatory aspects, as well as the mBridge project's long-term roadmap.

For the first time in history, Superstar Ragheb Alama & Saad Lamjarred will join musical forces to perform in the first one-of-a-kind Arab-led virtual concert in the metaverse. The ticket sales went live on September 15th, 2022 for the virtual concert which will be released live to fans on October 20th, 2022!

Tune in 20 minuets with @raghebalama when we go live to discuss the Concerts of the Future! pic.twitter.com/qFO6DCQRGw

Presented by MetaBoundless, and in Collaboration with Composer Michel Fadel, MetaBoundless has teamed up with the Algorand Foundation to create NFTs, which each concertgoer will use as their digital entry ticket.

UAE Ministry of Economy to Open Headquarters in the Metaverse

The Ministry of Economy of the United Arab Emirates (UAE) has announced a new headquarters in the Metaverse, which is accessible to everyone in the world. The announcement was made during the Dubai Metaverse Assembly by UAE Minister of Economy Abdulla bin Touq Al Marri.

The headquarters will be a multi-story building, with each floor having a particular role. Visitors will be able to purchase a ticket, which will cause a "customer happiness center employee" to enter the Metaverse and engage with them.The Ministry of Economy's customer service center in the digital world also provides services, according to Khalifa Al Jaziri, who’s avatar represents the ministry in the metaverse.

Meta, the parent company of Facebook and Instagram, unveiled another development in its digital arts effort. All users on both platforms can connect wallets and share nonfungible tokens (NFTs) across 100 countries as of September 29.

Users will be able to tag artists and collectors, as well as cross-post digital collectibles between platforms, as part of the functionality, which has been in testing since May.

Neom Tech & Digital, a subsidiary of Saudi megacity Neom, has renamed as Tonomus as it invests in the metaverse and artificial intelligence (AI). On the hope of advancing Tonomus' objective of placing Neom as the world's first "cognitive community," the business has invested $1 billion in AI projects, including a metaverse platform, in 2022.

Neom, a Saudi megacity under development that is said to be 33 times the size of New York City, will include, among other things, a 170km straight line metropolis known as The Line, an eight-sided city that floats on water, and a ski resort with a folded vertical hamlet.

Emirates Hires and Trains 4,000 New Cabin Crew in the Metaverse

Emirates, the largest airline which employs 16,000 cabin workers is planning to increase this number by 4,000 to close to 20,000 by next year, according to Adel Ahmed Al Redha, chief operating officer of Emirates The metaverse technology is utilized to train cabin crew, providing for efficient and precise training methods via simulated real-life circumstances. Also the metaverse will be crucial in training both newly hired and existing cabin crew.

7 tips to help you save time at work