DevaCurl, a company well-known for its hair care products designed specifically for people with curly hair has come under fire lately after thousands of women took to social media to share their unfortunate experiences, saying that the products have damaged their hair and is causing them baldness, scalp irritation, and hair loss.

Just making sure everyone using @DevaCurl is aware of the havoc its causing. Tens of thousands of people losing hair, straight up balding, losing their curls...this shit fully damaging everyone in the natural hair community. Please stop using it ASAP.

On Wednesday, a class-action lawsuit was filed against the maker of the popular brand in the Manhattan Federal court, stating that thousands of consumers have reported adverse effects since they started using the product.

Even though the product promises users they'll have more hydrated and stronger locks, consumers tweeted details of the problems they faced because of DevaCurl and shared photos showing the hair damage from which they have been suffering.

DevaCurl has a variety of products all dedicated to curly hair with a cost ranging between $20-$92.

before + after incorporating #devacurl products into my routine. pls believe these products will do more harm than good to your hair!! pic.twitter.com/trkdW1WIJi

You’re telling me the shampoo brand I’ve used for the whole 2 years of my curly hair journey is now being sued for scalp burning/itching, hair loss, and curl loss? To be safe were canceling deva curl. I’m curious to see if my hair gets even better??

Internet influencers who were paid by DevaCurl to promote its products also came forward denouncing the company and sharing their own accounts of hair issues they experienced because of DevaCurl.

In response to damage allegations flooding social media, DevaCurl, most-known for its "no-poo shampoos", released a statement on Tuesday promising further safety testing of its products in order to identify the problem.

In light of recent conversations, we have a new message to share with our Curl Community. Read it here: https://t.co/xKJaVk3JiC ? 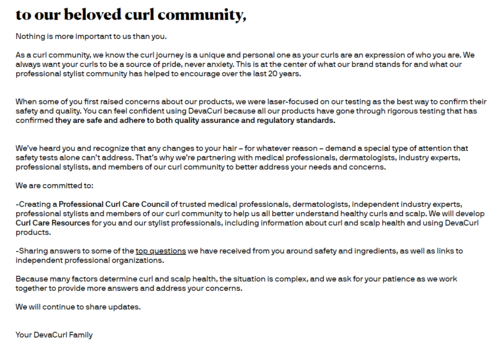 Yet, DevaCurl's statement seemed to have only aggravated people further, with consumers describing the company's response as "irresponsible," while demanding more serious action to "fix the problem faced by thousands of users."

This response is irresponsible. Won't get any money from me. Test the products in people's homes. If a large portion of your consumer base is showing proof of issues there is a problem YOU need to fix.

The issue NOT addressed in your “testing” is the effects products have after long term use (months/years). People love the product initially but after extended use hair is damaged & falling out. You’re responses also make it sound like its user error, which is also insulting.

According to Women's Wear Daily website, the company founded in 1994 was acquired by Ares Management LP from Tengram Capital Partners in 2017, for a sum that ranged between $250 million and $300 million and its annual revenue is estimated at around $100 million.