Social media has transformed so many aspects of modern life, from how we communicate and build communities online, to how we organise for social action and raise money for charitable causes. It has also changed the way companies, especially small ones, grow their businesses.

Today, Facebook estimate that around 25 million businesses in the European Union, mostly small businesses, are using thier services each month.

To understand the true extent of Facebook’s impact on the European economy, we commissioned a study by Copenhagen Economics, one of the leading economic firms in Europe. The study surveyed over 7,700 businesses across all industries and sizes in 15 countries.

This shows the critical role social media plays in driving sales for businesses across Europe. This is particularly true for small and medium sized businesses, who not only use social media to showcase their company and their products, but also as a trusted forum for communication with customers, a tool for analytics and insights and a source of cost-effective advertising, enabling them to reach new customers locally and abroad. 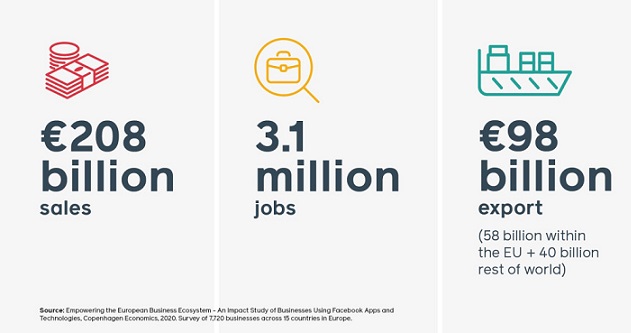 Virginia Pozo Castro started her business in 2011, borrowing money from her parents to finance the project, and since the beginning she’s used Facebook and Instagram to show off her designs and find new customers. Today, she has 22 stores across Spain and her clothes are stocked in 60 retail outlets in addition to her online store. 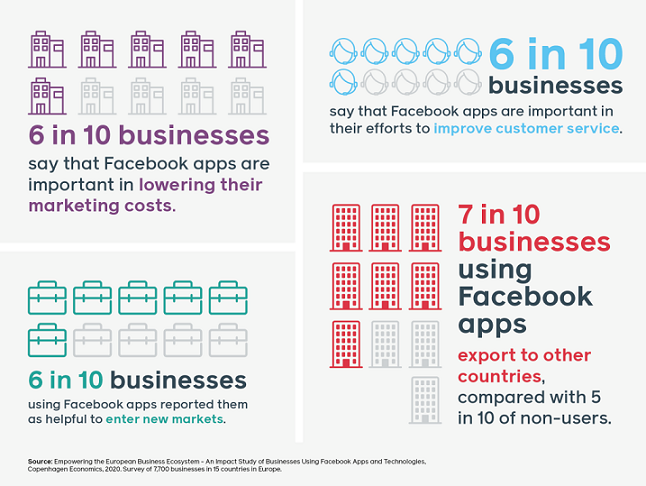 Virginia’s business is just one example of the millions of businesses using Facebook apps to connect with customers, drive sales and grow. For years, it’s been common to hear people discuss the ‘digital economy’ as if the value that technology companies add is somehow separate from the rest of the economy. This report shows how social media has become an integral part of the European economy and is significantly contributing to its growth.