How Are MENA Online Businesses Doing Compared to Global Names?

Published February 7th, 2021 - 03:00 GMT
Middle Eastern businesses have achieves just as much success as international ones, if not more. (Shutterstock: Kaspian)

For many people, a popular global brand name beats all. If you ask them about the best online shopping service, they will quickly mention Amazon. Yet, many MENA-based businesses have over the last several years successfully attracted huge audiences, offering just as good, if not better, services.

@_HadleyGamble @MattCNBC Actually i used Anghami App for long time and it is very good music app for mostly those who like arab music &arab music video!The main advantage of Anghami App is its price in Canada $4.99 compared with Apple music or Spotify which is about $10.00!

If we are looking for proof that Middle Eastern businesses are capable of competing with huge international ones, all we need to do is to look at how many of them have been acquired by global competitors.

In March 2019, the world-leading ride-hailing app Uber acquired its Middle Eastern equivalent Careem, which is based in Dubai, for $3.1 billion. Careem's latest numbers point at having more than 48 million users in 14 different countries, including but not limited to Egypt, Jordan, Pakistan, Saudi Arabia, and the United Arab Emirates.

Meanwhile, by the third quarter of 2020, Uber has gained 78 million monthly users worldwide.

Similarly, the Lebanon-based music streaming service Anghami has drawn the interest of 70 million users since it was launched in 2012, most of whom are amongst fans of Arabic music, as the platform offers listeners access to about 30 million music tracks. Even though Spotify has launched its services in the MENA region in 2018, Anghami continues to be just as popular, thanks to its unique library of Arabic music, which is not available anywhere else so far.

As per 2019 numbers, Anghami has 1 million paying users. 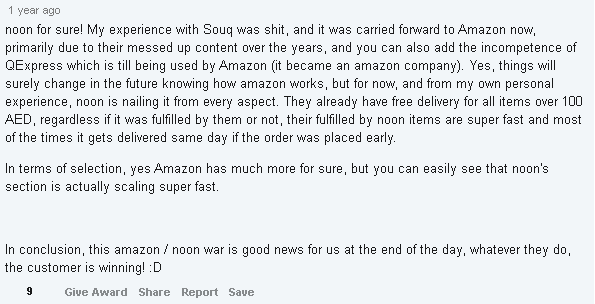 In terms of e-commerce and despite Amazon's global dominance and success, local and regional websites have been getting their own way in attracting customers in the MENA region. For example, in a Reddit thread on whether UAE residents prefer to shop through Amazon (previously known as Souq in the UAE), many comments have highlighted better prices, fast and convenient shipping, in addition to more UAE-oriented customer service experiences.

Other retail experiences include the Namshi online website which is available in all six GCC countries, offering countless numbers of trendy products for a growing number of customers. By 2017, Namshi was 6 years old and had reached over 1 million users in the MENA region. Meanwhile, in 2018, EMarketer estimated that Amazon had reached 26.43% of internet users in the UAE.

In terms of videos streaming services, while Netflix continues to have a worldwide lead expecting the number of its paying subscribers in the Middle East and North Africa to reach 12 million by 2025, the MBC-owned Shahid service has revealed that its paying subsribers number is estimated to hit 5 million by 2024, particulalry as 42% of the total of its content is locally produced for the Arab region, as opposed to Netflix's still growing Arabic library.

Which other MENA businesses are more capable of competing with international brands? What makes a regional brand highly competitive?