How the Black Gold Became Cheaper than a Bottle of Water?

Published April 22nd, 2020 - 09:45 GMT
Brent Crude, the international benchmark for price that is more widely used, was trading at $25.57 per barrel. (Shuttertsock)
Highlights
Demand for oil has dropped around the world in the wake of the coronavirus lockdowns, which governments have enforced to stop people from travelling in cars or planes.

Demand for fossil fuels has plunged amid the widespread lockdowns and traders are finding it difficult to store the oil flooding the market.

Somebody wasn’t able to make good on a futures oil contract and the price collapsed. And Twitter slipped into a frenzy.

The price of oil in the United States went into negative territory for the first time since prospectors began filling wooden barrels with black gold in the 1860s.

A barrel of West Texas Intermediate Crude to be delivered in May was minus $37.63 on Monday amidst concerns that so little is being consumed that all the storage tanks are full.

Demand for oil has dropped around the world in the wake of the coronavirus lockdowns, which governments have enforced to stop people from travelling in cars or planes.

A negative price basically means that someone was willing to give $37 a barrel to get rid of the oil in hand - something inconceivable for a lot of people.

It quickly turned into a trending subject on Twitter, where most of the users found joy in powerful traders taking a hammering.

Such a steep decline doesn’t necessarily mean that oil has stopped exchanging hands altogether or that there isn’t much value left in the world's most traded commodity. The price of WTI crude for delivery in June is around $21 - still much lower than the $60 price in January.

Brent Crude, the international benchmark for price that is more widely used, was trading at $25.57 per barrel.

But physical delivery of a barrel of oil ( you need to trade in at least a 1,000 barrels) is one thing and investors trying to make money out of the expected price shifts is another. 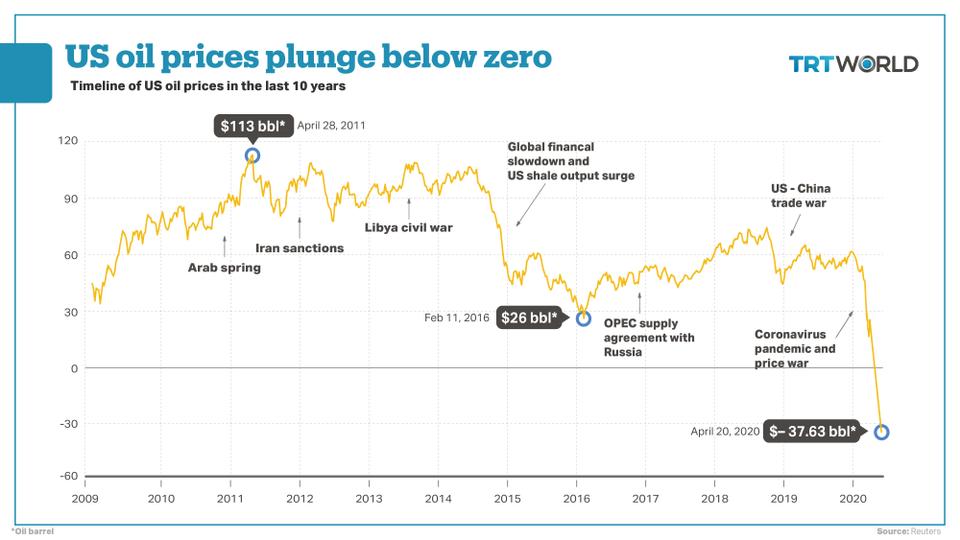 The below zero price scenario played out in the futures market where actual traders buy and sell oil along with Wall Street investors who try to make money off such a fluctuation. A futures market is where banks and brokers trade commodities such as oil and coffee.

As it turns out, Tuesday, April 21, was the last day to close the futures contracts for the month of May. That means that whoever held the contract had two options: either roll it over by settling the contract and buying another one with similar quantity to be delivered at a future date. Or be ready to receive the actual delivery.

Now here comes the big problem. Even though the US has become one of the largest oil producers on the back of the shale boom, it doesn’t have enough storage facilities - tanks and pipelines.

Since the price of oil is expected to be higher in June or later when the lockdowns are lifted, and some demand returns, the May contract wasn’t attractive anymore.

When the trader realised that there was no one ready to buy the contract so close to the expiration date and there wasn’t space to store the oil, it was offered at a steep discount.

Oil has lost more than half its value since January as demand has plunged amid fears that the global economy is heading into one of its worst recessions. The International Monetary Fund (IMF) predicts an economic contraction of 3 percent this year.

With aeroplanes grounded, people not taking out their cars and factories in many countries shut, the demand for diesel, petrol (gasoline) and jet fuel has gone down drastically.

Refineries, which keep stocks of crude oil in storage tanks, have slashed production and have plenty of inventory for now. The shipping tankers, including the very large crude carriers (VLCCs) with a capacity to store two million barrels, are also in short supply.

People on social media had a fine day mocking the entire situation with some saying a can of Pepsi was more expensive than a barrel of oil.

Oil prices were battered last month after Saudi Arabia flooded the market in a tussle with Russia over the price of the commodity. While major oil producers have settled their differences and agreed to cut production by 10 million barrels to support the price, global supply still exceeds demand by 30 percent.