While businesses continue to adapt to life with the on-going pandemic and the severe consequences of lockdowns imposed by governments to control the spread of the novel Coronavirus, the impact has not been as negative for everyone.

Do you think that #Covid_19 will result in more acquisitions or mergers?

Despite most world countries reporting sharply shrinking economies and many international companies announcing measures to minimize their losses following months of closures and movement restrictions, some business sectors have actually seen boosting profit and golden opportunities, including many start-ups in the Middle East and North Africa.

According to a report published by the Dubai-based leading start-up data platform MAGNiTT, MENA startups received $659 million worth of investments during the first six months of 2020, which is about 95% of the total investments over the whole of 2019. The report also noted that while investments in MENA start-ups during the first half of 2020 were 35% higher than those of the same period of time last year, the number of deals was 8% lower from H1 2019.

In general, MAGNiTT reported that more than 70% of start-ups reported a 25% slide in revenue, which affects their financial plans and employment decisions.

Meanwhile, the emergence of working from home routines due to months-long lockdowns in most countries in the region has had a massive mostly positive impact on businesses' attitudes towards technology and digital transformation, in order for them to continue finishing as many tasks as possible.

Additionally, the report spots changing trends in investors' interests and their tendencies to take risks, compared to pre-pandemic times.

In terms of funding, the UAE (59%), Egypt (19%), and Saudi Arabia (15%) ranked in the top 3 countries receiving the biggest funding across the region.

Jordan and Kuwait came in fourth and fifth places winning 2% and 1% of the deals, yet Jordan has reportedly been the most severely affected as it recorded that largest decline in terms of funding compared to the same period of 2019, with a 6% drop.

In terms of the numbers of deals processed during the first six months of 2020, Egypt and the UAE came in first with 25% of the deals each, while the KSA attracted 18% deals.

Out of 251 deals during H1, the biggest increase in the number of deals signed was seen in Oman with an 11% rise, while the sharpest fall was traced in Lebanon with -78% compared to H1 2019. The Lebanese drop can be attributed to the critical situation the country has been going through and the pressure of a potential economic collapse since October 2019 in addition to recurring political unrest.

One of the report's most interesting findings was that COVID19 changes can be easily traced in the industries that attracted the most investments. In 2019, Fintech accounted for 17% of the deals with a 66% rise compared to H1 2018.

In H1 2020, the three industries pointed to with a positive light despite COVID19 were unsurprisingly EdTech, FinTech, and HealthTech.

Due to the sudden switch to remote educational systems in most of the world, technological services innovated to facilitate online learning were especially booming during the first half of the year.

Similarly, the surge in most people's interest in obtaining information related to health in the wake of the pandemic reflected a greater interest in investing in HealthTech.

During the first six months of 2020, Fintech remained in the first rank in terms of share of deals for the second year, with 16% of the market. E-commerce services came in second with 14%, while Delivery and Transport apps came in third with 10%, with a 4% rise compared to H1 2019, granting it the biggest increase in deals in the MENA region.

IT Solutions and services in the Food and Beverage sector came in fourth place with 6% of the market each. 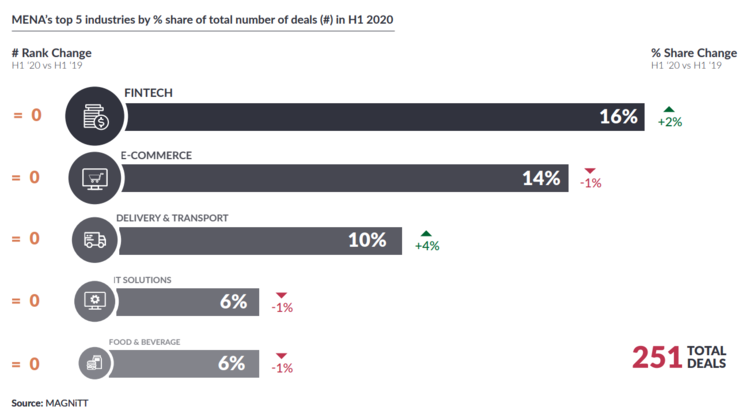 In terms of funding, 24% of the $659 million went to Real Estate which climbed to the first rank with a 4% increase, thanks to EMPG's $150 million deal.

E-commerce followed with a 2% rise receiving 22%, while the Food and Beverage sector soared with 10%, taking over 14% of the funding.

Similarly, Healthcare services attracted 9% of the money invested during H1, recording a 3% increase.

MAGNiTT's report detailing investors' attitudes during the first few months of the pandemic, that first emerged in the Chinese city of Wuhan in December 2019, highlighted less tendency to take risky decisions, especially as most deals involved businesses that have been relatively stable or benefited from the global crisis.

In addition to that, the report noted that investors seemed more interested in investing large amounts of money in start-ups that have been well-established.

Three of the main five investments of H1 took place during February 2020, only one month before the Coronavirus forced the world to go into nation-wide lockdowns for several weeks.

The biggest deal during February was the successful fundraising carried out by the UAE-based cloud kitchen platform Kitopi scoring $60 million.

The second investment of the month was $40 million worth of investment for the health-focused digital platform Vezeeta based in Dubai.

Two months later, the MENA's biggest deal in 2020 was the $150 million deal by the Dutch OLX Group to buy 39% of the Emerging Markets Property Group (EMPG).

Do you think the second half of 2020 will witness as generous investments in the MENA start-ups?