iPhone SE vs iPhone 6s: Worth the switch? 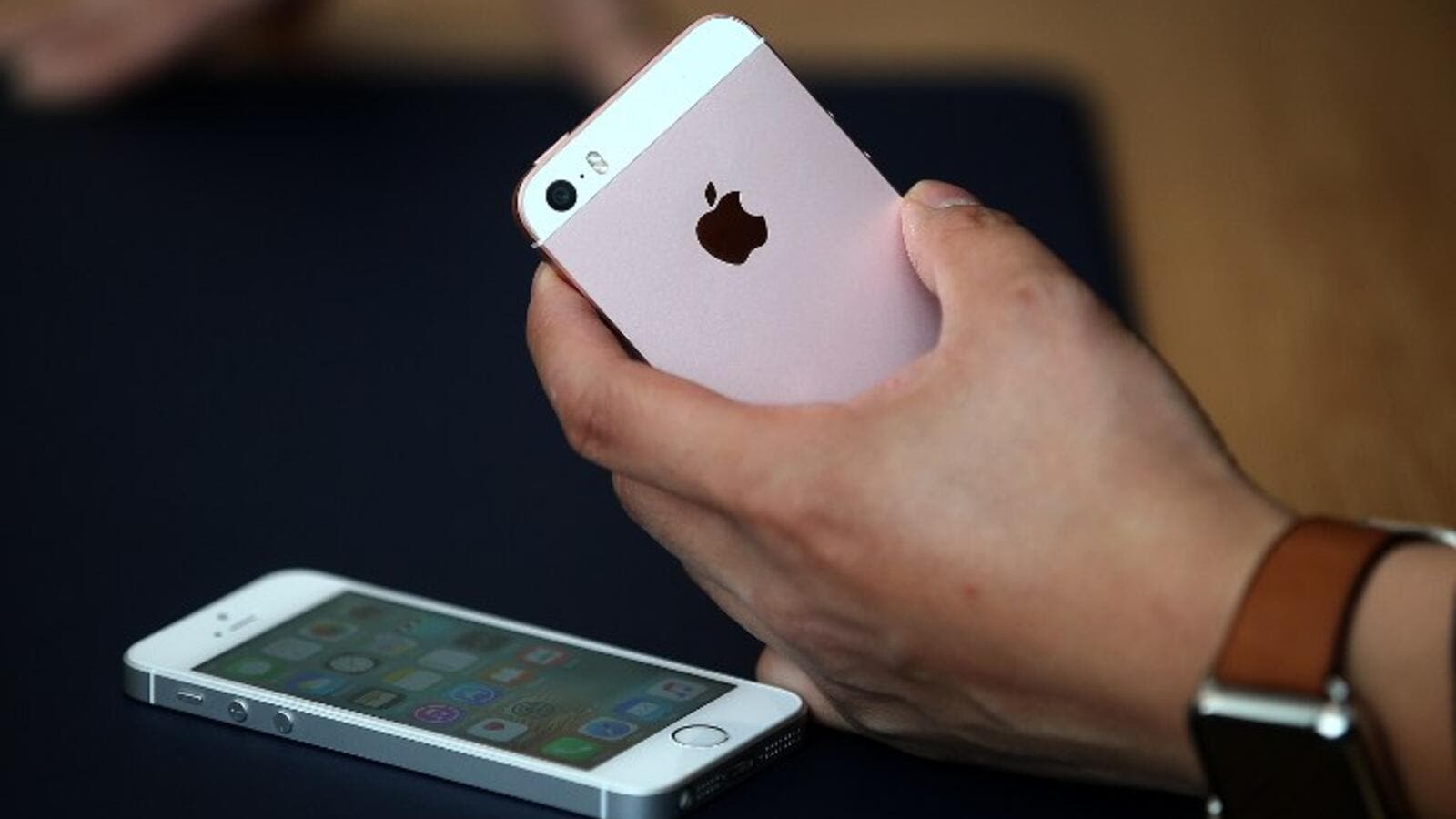 The iPhone SE contains the same hardware as the iPhone 6S. (AFP/Justin Sullivan)

iPhone SE is a clear example of how smaller size smartphones can pack a lot of firepower to rival that of phablets. With the 4 inch handset, Apple has made smaller devices relevant and in more than just one way, and iPhone SE is easily able to take on its larger sized brother, iPhone 6s. The 4.7 inch handset does deliver a lot of features, but when you have a choice to make between the two, there is a lot that you are unaware of and we will help you to make that decision extremely simple, so let us get started.

That is correct; if you are looking for performance from a compact handset, then look no further than an iPhone SE. It packs the same hardware as an iPhone 6s, because the insides comprise of Apple’s A9 SoC, which features a dual-core 1.84 GHz Twister processor designed by the company itself, along with a PowerVR GT7600 GPU. In addition, 2GB of LPDDR4 RAM is more than enough to help you engage in multitasking options. If you are looking for another reason to go for an iPhone SE despite its smaller screen, you will find that reason posted below.

2. Its smaller screen size results in a smaller resolution (and much better battery life)

Apple’s smartphones have not gone beyond past the 1080p mark, and looking at Sony’s Xperia Z5 Premium (the first smartphone to sport a 4K display), handsets coming with a 4K resolution are going to become relatively common in the future, if manufacturers are able to solve the issue of battery life. With Apple’s iPhone 6s, the smartphone rocks a 1334 by 750 resolution, whereas an iPhone SE sports a 1136 by 640 resolution. Smaller resolutions consume less power, resulting in better battery life, not to mention better graphics performance (the GPU and CPU pushes less number of pixels on the screen).

In fact, Apple has also listed specifications of the iPhone SE’s battery life as being higher than that of iPhone 6s, depending on what sort of activity you will be carrying out on your smartphones. The lists have been given below:

If you have absolutely no issues in using a 4 inch smartphone as your daily driver, you will be happy to know that you experience more battery life and rake out more performance from it.

It’s hard to believe that smaller inched smartphones sport camera sensors that capture images and footage of equivalent quality than those that feature larger screens. However, in addition to better performance and increased battery life, iPhone SE is also incorporated with a 12MP rear camera. Smaller number of megapixels is not necessarily a bad thing, since more light is able to enter per pixel, resulting in better images in low-light environments.

One huge reason to invest in an iPhone SE is that it able to record 4K video at 30fps, being equal to iPhone 6s and iPhone 6s Plus. Additionally, if you want to conserve space and edit slow motion videos, this camera sensor will be able to do just that thanks to recording in the following resolutions and framerate:

The rear sensor might not produce images sharper than 16MP sensors, but as more and more camera sensors are succeeding their previous versions, its more about the quality of the tech, and less about the number of megapixels crammed into it. Additionally, if you’re a selfie buff, then you will love this new feature; according to Apple, the display of iPhone SE increases to three times its default brightness in order to capture a high quality selfie without compromising the image quality. Front flash features are present in some smartphones, but in low-light, then up end tarnishing the image far more than actually contributing to its quality.

With all the tech present on the camera side of things, it is pretty evident that there is no downside to using both cameras on iPhone SE right? Wrong; the smartphone might be impressive in several ways but the one downside to using it is the front camera, and that will be because of the lack of megapixels. With a maximum resolution of 1.2MP, iPhone 6s and 6s Plus definitely win in this category because they have an impressive 5MP camera. However, one little difference will obviously not force you to deviate from your purchase, so let us dive into more features before ultimately reaching our decision.

4. It does not have 128GB capacity model

Yes, that is correct, iPhone SE only comes in the 16 and 64GB capacity models. 64GB is definitely the sweet spot for any handset right now and it is definitely more than enough for you to carry around your entire media collection with you. Unfortunately, there are consumers whose collections exceed this limit as well, requiring them to go for a storage model upgrade. However, we are under the assumption that those numbers are going to be extremely minute in number.

5. iPhone SE features a fingerprint scanner, but there’s a catch

Apple’s proprietary Touch ID fingerprint scanner is integrated into the home button of iPhone SE, but if you want to experience the same speed recognition found in iPhone 6s and 6s Plus, you will be fresh out of luck. This smartphone’s Touch ID is the same one present in iPhone 5s, showing that Apple did make a few sacrifices along the way. According to Pocketnow, a specification breakdown let the staff to conclude that the fingerprint scanner is comprised up of older hardware. However, if you do not have a problem with the amount of time it takes to deduce your identity, then we strongly suggest that you invest in this device.

6. iPhone SE does not have a pressure sensitive display

Also known as Force Touch, a feature found in iPhone 6s, iPhone 6s Plus, Apple Watch and the 2015 12 inch MacBook, this display is not present in iPhone SE. While it is definitely a handy addition of playing around with and fire up commands that give you access to more functions by just putting a slight amount of force on the screen. It is still rather new, meaning that developers will probably be finding much better use of the technology with their applications in the near future, which will be some time from now.

Naturally, as more and more Android smartphones are released boasting this feature, it will compel developers to branch out more functions in their apps. As of right now, even if iPhone SE does not have a pressure sensitive display, do not be too upset about; chances are you will probably forget about such a thing as soon as you make your purchase.

7. It does have an NFC chip

Contactless payments have become possible through our smartphones thanks to Apple and the incorporation of NFC chips inside its mobile devices. While NFC cannot be used to transfer data across device of an iPhone SE (or any other iPhone for that matter), you can still use Apple Pay to make purchases without using your payment card.

In many ways, using NFC based payment techniques is definitely safer than resorting to use your debit or credit card since the information does not stay on the ‘point of sale’s’ server, meaning that the threat of having a hacker steal your card details is severely reduced (‘point of sale’ is a hub where your payment card is swiped in order to complete the transaction). The only drawback to using NFC based payments is that there are limited merchants that are accepting transactions through this channel, but this will obviously take time to be embraced.

Reasons why you should and should not purchase an iPhone SE

Right now, there is no such thing as a perfect smartphone, and despite iPhone SE’s impressive hardware, it does come short on a lot things, which have been listed below. To sum up everything, we have stated below the reasons why you should and you should not invest in an iPhone SE.

Overall, iPhone SE is practically an iPhone 6s, with one major difference (screen size) and a few minor ones. However, you definitely cannot ignore that price tag and looking at Apple, it is quite hard to believe that a 4 inch powerhouse of an iPhone can cost you just $399 (for the 16GB model). As we conclude this, we have to say that in a world littered with phablets, Apple has definitely given us more than our fair share of reasons why we should head out and invest in an iPhone SE.