Published March 22nd, 2022 - 07:29 GMT
This is not the first lawsuit against the governor of Banque du Liban. (Shutterstock)

A Lebanese judge charged Central Bank Governor Riad Salameh and his brother Raja with  "illicit enrichment" and money laundering, an official in the judiciary said Monday. 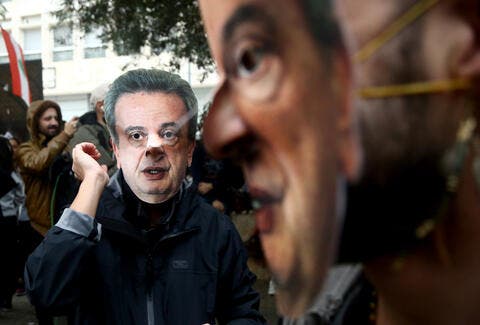 Lebanon: Salameh to Sue Bloomberg Over A “Rumor”

Ghada Aoun, an investigative judge at Mount Lebanon district court, charged Salameh, his wife and Raja who was arrested last week of facilitating money laundering through companies they own, the official said. Aoun also ordered that Raja’s assets be frozen.

It's worth noting that the same charge was filed against Ukrainian national Anna Kosakova, who jointly owns a company with Raja Salameh.

Aoun said that the Salameh brothers and Ukrainian citizen Anna Kosakova had formed three companies in France to buy property there. Last week, Aoun said that central bank governor had used his brother to buy real estate in France worth nearly $12m.

This is not the first lawsuit against the governor of Banque du Liban. The veteran banker is also under investigation in in several European nations, including Switzerland and France. According to Bloomberg, Swiss authorities have been looking into allegations that Salameh indirectly benefited from the sale of Lebanese Eurobonds held in the central bank’s portfolio. Salameh has denied those allegations, and claimed that his fortune was made during a previous career as a private banker at Merrill Lynch.