Now That Trump's Peace Plan is Revealed in Full, What Does it Promise for the Middle East Economy?

After three years of drafting the long-awaited Middle East peace plan as promised by US President Donald Trump and his team, a 181-page document titled Peace To Prosperity was released yesterday by the US administration, unveiling the American proposal through which, Trump wishes to achieve long-lasting peace between the Israelis and the Palestinians.

The document includes detailed information about the projects that can be achieved to uplift the troubled Palestinian economy within the next 10 years. 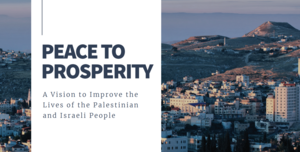 The plan, welcomed by Israeli Prime Minister Benjamin Netanyahu and his political rival Benny Gantz who attended the press conference held by Trump on Tuesday at the White House, has been faced with Palestinian rejection, as officials in the Palestinian Authority expressed their disappointment with the American proposal, saying that it doesn't meet their national aspirations and disregards their most basic rights.

Despite the plan's 'disappointing' offer to Palestinians in terms of politics, the Trump administration seems to have focused its efforts on presenting a promising, generous economic strategy focusing on attracting investments, boosting Palestinians exports, and creating more jobs, as well as contributing to neighboring countries.

Most of the details revealed in the recently released document have been highlighted by US Senior Adviser Jared Kushner in a workshop held in Manama, Bahrain last June.

Peace To Prosperity promises Palestinians in the West Bank and Gaza $50 billion of investments which should in 10 years enable them to double their GDP, add 1 million new jobs, reduce their unemployment rates currently at about 30% to single digits, and to cut their poverty rates by 50%.

Stock Exchanges across the globe are encouraged to make tangible commitments to advance #GenderEquality#Palestine_Exchange#IWD2019 #GenderBell pic.twitter.com/85f9ZqriK0

Trump's peace plan aims to set a new foundation for the Palestinian economy hoping to generate rapid economic growth and create jobs, through building a safe environment that attracts foreign investments and assets, issuing stronger property and anti-corruption laws that can regulate sustainable businesses. The American proposal hopes that Palestinians will eventually be able to achieve a World Bank Doing Business ranking of 75 or better.

According to the Peace To Prosperity document, the ultimate goal is to increase the foreign direct investment share of Palestinian GDP from 1.4 percent to 8 percent. The plan also focuses on increasing Palestinian exports as a percentage of GDP from 17 to 40.

To achieve this, the plan pledges major investments in infrastructure like electricity, water, and telecommunications sectors, in addition to the transportation field which can help in reducing regulatory barriers to the movement of Palestinian goods and people. The plan also highlights the role neighboring economies can play, most notably Egypt, Israel, Lebanon and Jordan in developing different economic projects focusing on entrepreneurship, small businesses, tourism, agriculture, housing, manufacturing, and natural resources.

In its second economic premise, Peace To Prosperity concentrates on the human capital in Palestine, proposing several major projects that enhance the quality of the educational system and encourage educational reforms and innovation, developing academic standards and curricula. The American plan promises to establish at least one Palestinian university in the global top 150.

Among the Mideast deal's goals, is to encourage workplace development through supporting apprenticeships, career counseling, and job placement services, so Palestinian youth "become fully prepared to enter the job market and achieve their professional goals." The plan also hopes to increase the female labor force participation rate from 20 to 35 percent, through women-empowering initiatives.

The Palestinian PM Muhammad Shtayyeh received a delegation of the American Federation of Ramallah, #Palestine, and praised their role in supporting the health sector in Palestine, bringing in Palestinian doctors to serve hospitals, and building 6 new hospitals in West Bank #news pic.twitter.com/MplhKnTPQy

Additionally, the proposal pledges higher standards regarding health services and life quality, granting Palestinians access to better health services and equipping their health facilities with the needed skills and tools. Ultimately, it aims at reducing infant mortality from 18 to 9 per 1,000 births and increasing average life expectancy from 74 to 80 years.

Finally, the plan lists several projects that intend to develop the governance sector in the future Palestinian state, by improving government services and e-government systems, hoping to have Palestine achieve a United Nations E-Government Development Index score greater than 0.75.