Published July 1st, 2021 - 03:00 GMT
Brent crude traded just above $75 as ministers from the 23-strong OPEC+ alliance, led by Saudi Arabia and Russia, prepared for one of the most important meetings for many months. (Shutterstock)
Highlights
Price steady as market awaits key meeting of OPEC+ ministers

Oil prices held steady on Wednesday ahead of a crucial meeting of producers that could set the tone of the global crude market for the rest of the year. 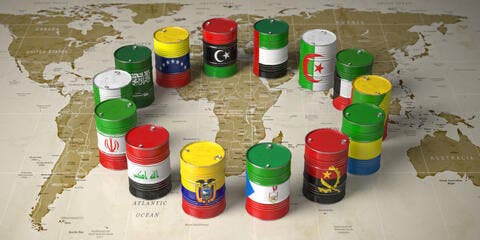 Brent crude traded just above $75 as ministers from the 23-strong OPEC+ alliance, led by Saudi Arabia and Russia, prepared for one of the most important meetings for many months.

They will decide on Thursday whether to increase production against a background of improving demand as the world climbs out of the pandemic recession.

But Prince Abdul Aziz bin Salman, the Saudi Energy Minister, is believed to favor a cautious approach as the global market approaches rebalancing after the volatility of last year, with new COVID-19 variants threatening economic recovery in several countries.

Prince Abdul Aziz told a US investment forum last week that some forecasts for economic recovery and oil demand growth could turn out to be “excessively optimistic.”

OPEC+ is believed to be looking at a number of scenarios for the rest of the year, following a three-month deal that gradually raised output but which ends at the beginning of August.

One option is to increase production by about 500,000 barrels a day in August, and the possibility of locking that into another three-month period of graduated increases.

Russian OPEC+ minister Alexander Novak is thought to be supportive of such a proposal. Russia’s oil ally Kazakhstan said it wanted an increase on current production levels.

Although there has been strong demand recovery from big economies such as the US and China, some parts of Europe are still affected by pandemic lockdowns. If OPEC+ increases supply significantly and demand falls off unexpectedly in the autumn, the oil price could be seriously impacted.

Oil bulls remain confident. US investment bank Goldman Sachs, which has forecast a possible $100 a barrel price next year, said that even a 1 million barrel increase in August would make little difference to its forecasts.

Mills said: “They should agree to add supply after July, but the question is how much, and whether they again offer three-month guidance.”