A petition has had over 6,000 signatures suggesting Amazon founder Jeff Bezos should be denied re-entry to Earth when he launches for space next month.

The tongue-in-cheek petition compares Bezos, who is set to launch to the edge of space on his Blue Origin rocket on July 20, to superman villain Lex Luthor.

He will fly with his brother and two others, including the winner of a £20 million pound auction, on the first crewed flight of the autonomous New Shepherd rocket.

Titled 'Petition To Not Allow Jeff Bezos Re-Entry To Earth,' the change.org page urges people to sign to keep him out, adding 'The fate of humanity is in your hands.'

The petition was launched five days ago and is addressed to Blue Origin, the rocket launch firm founded by Jeff Bezos in 2000 and operator of the upcoming flight.

It has been signed by over 6,800 people at the time of writing but has new signatures coming in every few minutes, with some suggesting he 'takes Elon [Musk]' with him.

Jeff Bezos is actually Lex Luthor, disguised as the supposed owner of a super successful online retail store,' the petition description says, adding he is 'actually an evil overlord hellbent on global domination.'

'He's also in bed with the flat earth deniers,' the petition jokingly claims, adding 'it's the only way they'll allow him to leave the atmosphere.'

The creator of the petition, Jose Ortiz, suggested the upcoming spaceflight was a perfect opportunity to rid the world of the man he describes as an 'evil overlord' and urges Blue Origin to stop the rocket returning to Earth.

He also jokingly says governments stand by and watch as he takes over the world.

Ortiz pokes fun at Bezos, saying he is in cahoots with ‘the Epsteins and the Knights Templar,’ as well as the flat Earth deniers.

He says keeping him in space is essential before this Bezos-led cabal 'enable the 5G microchips and perform a mass takeover'.

Bezos and the three other space tourists will venture up to 62 miles above the Earth's surface on the New Shepherd rocket.

This is the point believed to be the boundary between Earth's atmosphere and outer space, although NASA recognises 50 miles above the surface as the edge of space.

They will launch on July 20, the 52nd anniversary of the Apollo 11 moon landing, flying at more than 2,000 mph to get into space.

After its moments in orbit, providing a few minutes of weightlessness, the innovative vehicle is supposed to float back on parachutes and land upright.

New Shepard - named after first American in space Alan Shepard - flies by automation, is 59ft high, and has room for up to six passengers. 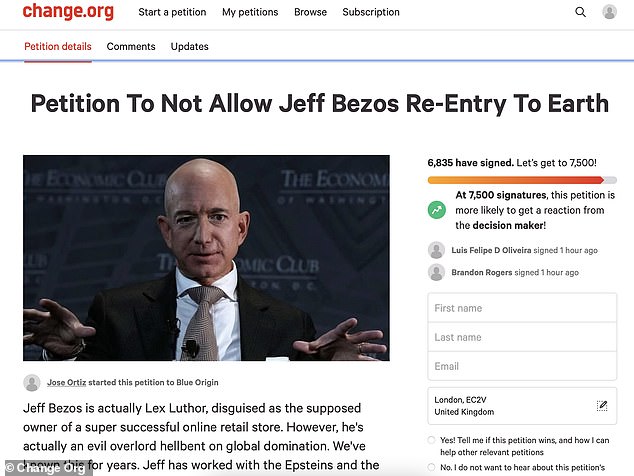 Bezos, who has built a fortune of some £130bn after spotting the potential for online shopping 30 years ago and starting Amazon as an internet bookseller, is stepping back from the top of the firm early next month.

The richest man in the modern world, Bezos has come under fire for alleged anti-competitive practices through Amazon.

He has also come under fire for controversial labour practices at Amazon, including complaints of low wages, constant surveillance of employees and overwork.

His Blue Origin project has so far completed 15 flights, but all of them have been unmanned. He has been putting $1bn a year into it out of his spare change.

As a result of his planned personal trip Bezos is now the leader in the space race which has developed between himself and rival technology entrepreneur Elon Musk, the similarly fabulously rich boss of Tesla electric cars.

In an Instagram post, Bezos said he had dreamed of travelling to space ever since he was five years old, adding: 'I will take that journey with my brother. The greatest adventure, with my best friend.'