Powered by the NVIDIA Ampere architecture and the 2nd generation of NVIDIA RTX, the world’s most powerful PC gaming platform for real-time ray tracing and AI, the GeForce RTX 3060 Ti delivers blistering 1080p and 1440p gameplay.

The RTX 3060 Ti also supports the trifecta of GeForce gaming innovations too, including performance-accelerating and IQ-enhancing NVIDIA DLSS technology which is now available in over 25 games; NVIDIA Reflex which reduces system latency (‘input lag’), making games more responsive, and giving players in competitive multiplayer titles an extra edge over the opposition; and NVIDIA Broadcast, a suite of audio and video AI enhancements including virtual backgrounds and noise removal that users can apply to chats, Skype calls and video meetings. So whether they’re playing traditional PC titles, powering through creator and productivity workflows, or marveling at the latest cutting-edge ray-traced titles like Cyberpunk 2077, Call of Duty: Black Ops Cold War, Watch Dogs: Legion, and more, the GeForce RTX 3060 Ti delivers the best possible experience in its class for everyone everywhere. 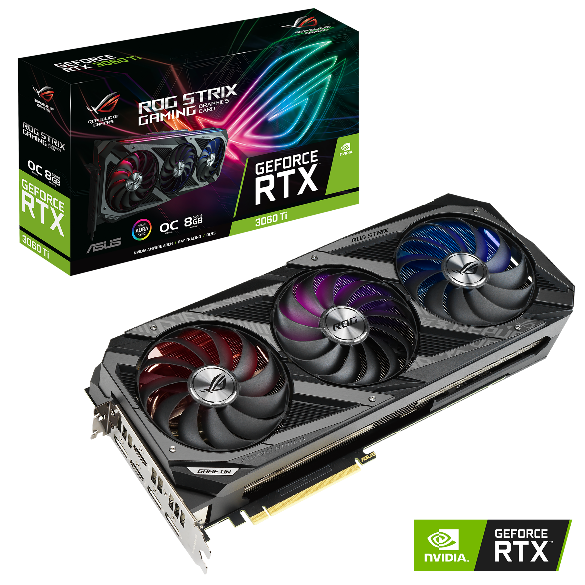 A shroud with metal accents encompasses a trio of Axial-tech fans that have been tuned to fulfill specialized roles. The central fan leverages a full-height barrier ring and 13 fan blades that provide boosted static pressure to drive air through the heatsink fins and onto the GPU heat spreader. The two fans on the flanks feature 11 blades each and half-height barrier rings to allow for more lateral dispersion and to provide better airflow through the cooling array. Turbulence between fans is reduced due to a reversal of the center fan’s rotational direction.

A larger heatsink that fills most of the card’s 2.9-slot footprint was designed to leverage the increased airflow. To get heat up off the die and into the heatsink array, MaxContact technology has been utilized to polish the surface of the heat spreader and improve smoothness at the microscopic level. The extra flatness allows for better contact with the die for enhanced thermal transfer.

In addition to an enhanced cooling array, Super Alloy Power II components, including top-shelf capacitors, chokes and power stages, effortlessly deliver hundreds of watts at a millisecond’s notice. The card’s components are soldered to the PCB using ASUS-exclusive Auto-Extreme Technology to ensure precise joints and that each card meets rigorous ROG specifications for reliability.

Also included are FanConnect II headers that allow PWM fans to be tuned based on CPU and GPU temperatures, providing extra intake or exhaust for demanding 3D tasks and compute workloads. Builders looking for a quick and simple way to adjust their card’s default behavior can flick an onboard Dual BIOS switch to choose between “performance” and “quiet” profiles without software. Another ease-of-use feature is an onboard voltage-sensing circuit that monitors PSU rail voltage. The circuit is fast enough to catch any transients that result in the rail voltage dropping too low. If that happens, a red LED will light up to indicate a power supply issue, making it easier to debug the source of crashes during gameplay.

The front side of the graphics card features an addressable RGB element that can be customized with Armoury Crate software, and the reinforced metal frame adds a protective layer that improves durability.

Flipping the card around reveals a metal backplate with a wide vent. The vent allows hot air to escape towards chassis exhaust fans instead of being recycled back into the GPU cooler. Beneath the GPU, a bracket provides consistent mounting pressure between the die and heat spreader. Stainless steel is used for the I/O bracket to protect ports and provide a more secure mount. 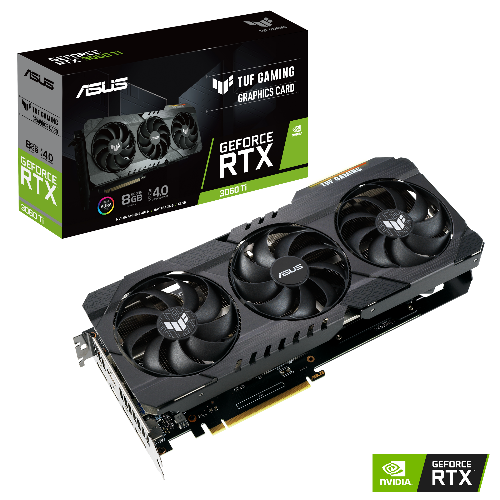 TUF Gaming GeForce RTX 3060 Ti graphics cards provide exceptionally robust power and cooling. An all-metal shroud houses three powerful Axial-tech fans that utilize durable dual ball fan bearings. Fan rotation has been optimized for reduced turbulence, and a stop mode brings all three fans to a halt at low temperatures. In line with the TUF Gaming legacy, components are selected based on their durability and performance. In addition to top-shelf chokes and MOSFETs, capacitors with military-grade certification make TUF Gaming stand tall amongst the competition. The automated manufacturing process, using Auto-Extreme Technology, ensures components are placed and attached with high precision, and each card is subjected to a grueling 144-hour validation trial to ensure flawless performance when it counts.

Most of the rear is swathed in a protective metal backplate that prominently features a wide vent to prevent heat buildup. Beneath the GPU, a bracket provides consistent mounting pressure between the die and heat spreader. Stainless steel is used for the I/O bracket to protect ports and provide a more secure mount. A conveniently placed Dual BIOS switch allows customization of the card’s default performance profile without software. 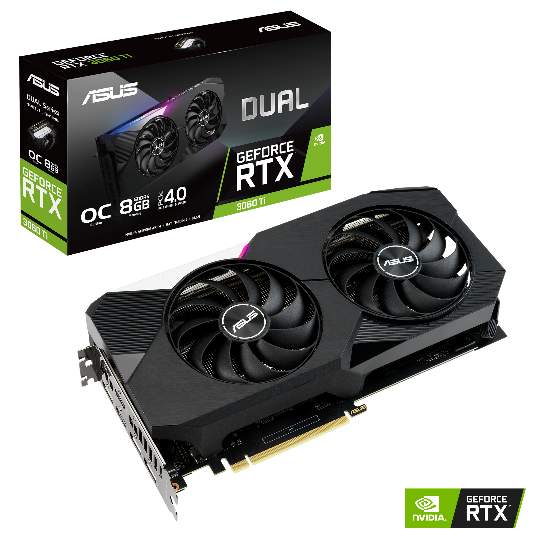 ASUS Dual GeForce RTX 3060 Ti leverages advanced cooling technologies derived from flagship graphics cards, making it the perfect choice for a well-balanced build. A clean shroud matches the aesthetic of workstations and decked-out gaming rigs alike. Two tried-and-true Axial-tech fans are designed to provide ample airflow to the heatsink, and the fans come to a halt automatically at low temperatures.

Auto-Extreme Technology reduces thermal strain on components during the manufacturing process and avoids the use of harsh cleaning chemicals, resulting in greater precision and reliability, less environmental impact and lower manufacturing power consumption. An aluminum backplate and stainless steel I/O bracket help protect the PCB from unwanted flex. The ASUS Dual GeForce RTX 3060 Ti graphics card is ready for gamers, content creators and enthusiasts who are looking for a robust plug-and-play experience. 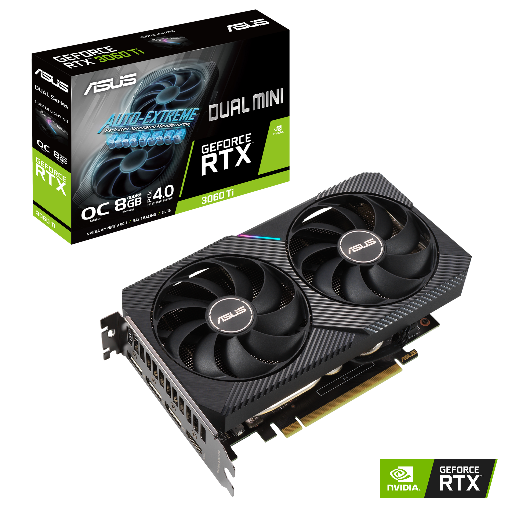 The new ASUS Dual GeForce RTX 3060 Ti MINI graphics card is specifically designed for small-form-factor systems and the Intel® NUC 9 Extreme Kit and Intel NUC 9 Pro Kit. At under 20 cm in length, Dual MINI provides the broad compatibility of a compact design while delivering exemplary thermal performance. It features a custom two-slot cooler comprised of a large heatsink and two Axial-tech fans that provide high static pressure to keep temperatures in check. The powerful cooling is backed by the reliability of Auto-Extreme Technology, making Dual MINI the obvious choice for long-term deployment in small-form-factor chassis. 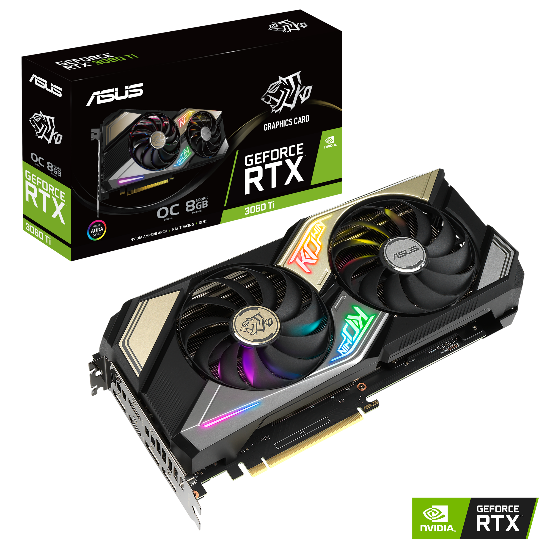 ASUS KO GeForce RTX 3060 Ti graphics cards build on the foundation laid by ASUS Dual by way of a modified shroud, space-grade fan bearing lubricant, long-lasting capacitors and a vented backplate. The shroud features gold and silver faceplates laced with customizable ARGB lighting to give the KO a unique aesthetic that can be customized with Aura software.

Cooling is taken care of by a large heatsink that fills most of the card’s 2.7-slot footprint, teamed with a vented backplate to prevent heat buildup. The two Axial-tech fans spin on sleeve bearings immersed in space-grade lubricant, which enhances durability and delivers a quieter acoustic profile than dual-ball-bearing designs. The card’s components are attached using Auto-Extreme Technology, and these include capacitors rated to last up to 2.5 times longer than the industry standard. The potent combination of aesthetics, cooling and durability make KO GeForce RTX 3060 Ti graphics cards the perfect choice for gamers who prefer to unabashedly showcase their gaming rigs on the desktop.

ASUS is passionate about technology and driven by innovation. We dream, we dare and we strive to create an effortless and joyful digital life for everyone. We're always in search of incredible ideas and experiences, and we aspire to deliver the incredible in everything we do.