Boursa Kuwait Securities Company (KPSC) held its E-Annual General Assembly (AGM) meeting for the year ended 31 December 2020 today, Thursday, April 1, 2021. During the meeting, which was held virtually as part of the company’s commitment to ensuring the safety of its shareholders and in line with the preventive measures to curb the spread of COVID-19, the Board of Directors’ recommendation to distribute 40 fils per share as cash dividends was approved, with a total value of about KD 8 million.

The Board of Directors' report, the Auditor's report and the consolidated audited financial statements for the fiscal year ended on December 31, 2020 were all approved, as were the Corporate Governance and Audit Committee reports and the remunerations and benefits report for BOD members and Executive Management.

The AGM was chaired by Chairman Mr. Hamad Meshari Al-Humaidhi, who read the reports issued by the Kuwait Clearing Company’s electronic system regarding the quorum of attendance, the results of participation and voting included in the agenda, as well as a report of the shareholders' notes.

Shareholders agreed to grant the Board of Directors authorizarion to buy or sell the company's shares, provided they do not exceed 10%, in accordance with the provisions of Law No. 7 of 2010 and its executive regulations and amendments. Shareholders also discussed and approved the Related Parties’ Transaction Report for 2020 and the related parties’ transactions, which are proposed to be conducted during the upcoming 2021 financial year. Finally, the reappointment of Mr. Badr Adel Salem Al-AbdulJader from Ernst & Young (Al-Aiban, Al-Osaimi & Partners) as the auditor for the fiscal year ending on December 31, 2021 was also approved.

Boursa Kuwait Chairman Mr. Hamad Meshari Al-Humaidhi commented on the results, stating, “Boursa Kuwait continued its series of achievements and milestones during 2020, most prominent of which was the self-listing of the company’s shares on the Premier Market, reinforcing its position as a regional leader among stock exchanges and continuing a series of milestones for the company.”

He added: “The company also increased the percentage of shares it owns in the Kuwait Clearing Company to 50%, thereby becoming the largest shareholder in this company, and helping streamline the investment processes for all market participants.”

Al-Humaidhi also highlighted the exceptional and unprecedented performance achieved by Boursa Kuwait and hailed the commitment of the Board of Directors to support the company’s strategy, given its many achievements despite the challenges facing the market last year. The company continued implementing its strategy and successfully faced the turmoil and fluctuations of 2020, recording a record year of results and making great strides in its path to be a leading and prominent stock exchange in the Middle East, and a market ranked by the most prominent global indicators.

He added, “The company fulfilled the promise it made at the end of last year to continue to grow. In spite of the circumstances posed by the COVID-19 pandemic, which led to the disruption of the global economy, Boursa Kuwait and the Kuwaiti capital market continued trading operations using a series of precautionary measures to minimize the negative impact on trading actions and results while ensuring the safety and health of all involved stakeholders.”

Boursa Kuwait’s Chairman ended his speech by thanking his fellow Board members, Executive Management and all company employees for their diligence and dedication in contributing to the realization of the company’s strategy and goals. 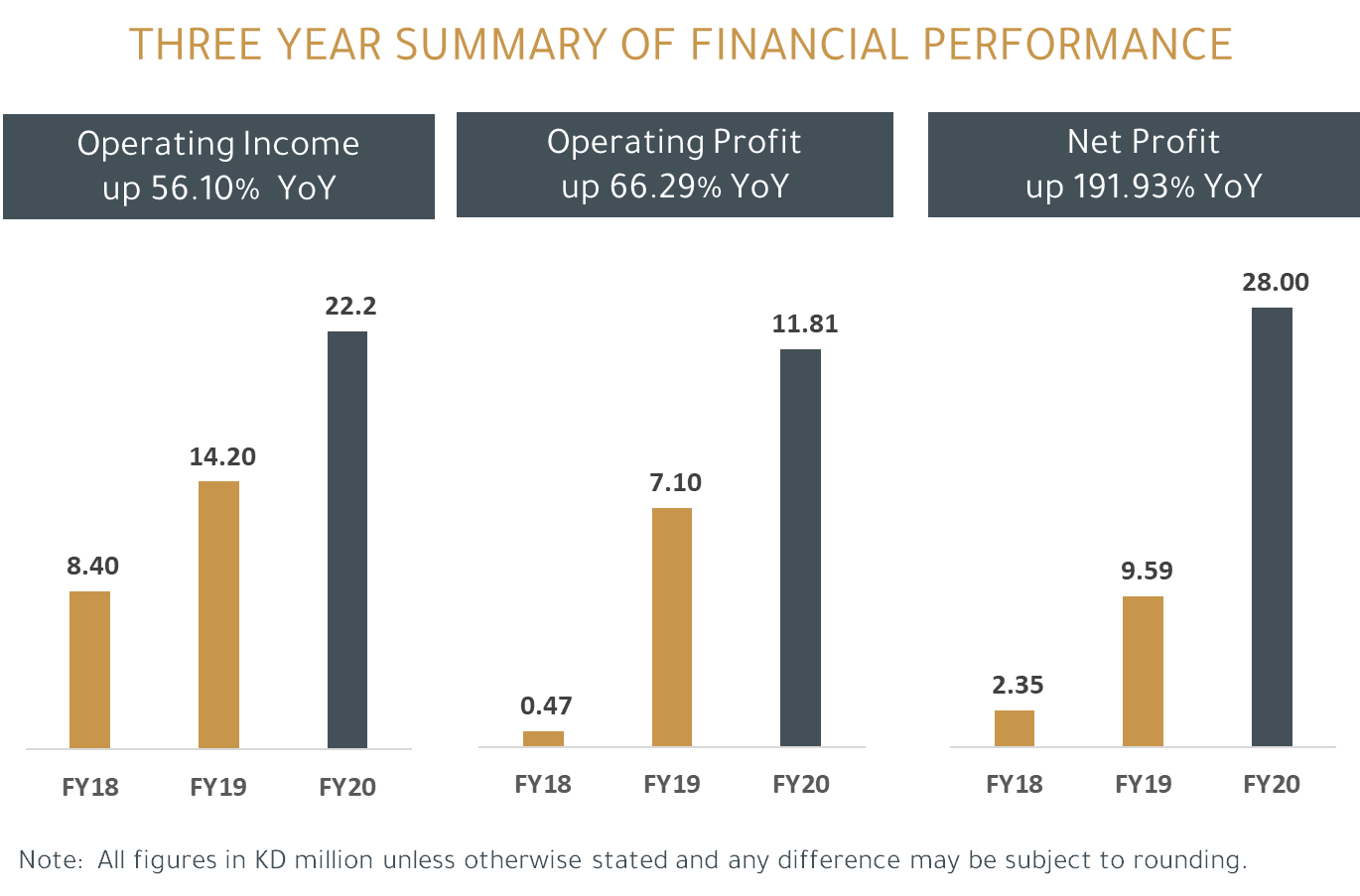 Al-Osaimi commented: “Boursa Kuwait delivered a solid all-round financial performance, with operating profit increasing by 66.3% to KD 11.8 million and operating profit margin increasing from 50.01% to 53.27%. Net profit also witnessed an increase of 191.9%, to rise to over KD 28 million, while operating income recorded an increase of 56.1% over the previous year, soaring from KD 14.2 million to KD 22.2 million.”

This was due to an increase in operating revenues, due in part to the consolidation of the Kuwait Clearing Company, the rise in trading volume due to the increase in foreign ownership in Kuwaiti banks, the annual review of Kuwaiti companies in the FTSE Russell Index for emerging markets, and the inclusion of Kuwaiti companies in the MSCI Emerging Markets Indices, which accounted for over KD 961.6 million in traded value and representing one of the highest one-day traded values in the history of Kuwait’s capital markets. As a result, foreign ownership within the Premier Market increased by 13%, while foreign trading flows accounted for approximately 26% of traded value in 2020.

Al-Osaimi also shed light on the company’s efforts to raise awareness of ESG metrics, saying: “With Kuwait’s inclusion in the MSCI Emerging Markets Indices, sound Environmental, Social and Governance (ESG) reporting is integral as is meeting the demands of institutional investors for transparent and effective sustainability reporting. Compliance with ESG policies also contributes to creating a more robust capital market, and drives its sustainable development and growth.”

He added, “Throughout 2020, the company has collaborated with MSCI and some of the world’s leading companies in this field to raise awareness and adoption of these metrics, which are integral and a requirement of institutional investors worldwide, as adopting ESG policies will undoubtedly improve a company’s performance and competitiveness over the long-term.”

The auditor's report on financial results indicated that Boursa Kuwait recorded a positive financial performance supported by the company’s progress in implementing various initiatives within the framework of its Market Development plan and strict cost controls.  Basic earnings per share reached 128.5 fils from the 2019 value of  47.8 fils, while the book value per share went up to 263 fils from 160 fils in 2019.

The Boursa Kuwait CEO thanked the Board of Directors for their continuous support of the company’s strategy and operations. He also thanked the Capital Markets Authority and the Kuwait Clearing Company for their support and continuous cooperation in developing the market.

He also reiterated the company's commitment towards growth and progress and the development of its infrastructure and work environment to international, best-in-class standards, and its effort to gain the confidence of  investors, both locally and abroad by providing attractive investment opportunities.

Boursa Kuwait is working to develop a strong and efficient financial market with liquidity and transparency, that can effectively put issuers and investors in touch with one other for investment opportunities and high returns on investment to create a developed capital market that is a pioneer in the region.

Calhanoglu Strikes as Inter Bounce Back to Sink Barcelona

Despite Optimism The Israeli-Lebanese Maritime Deal Maybe in Trouble