UAE saw almost 70,000 cyberattacks on smartphones in 2020 with an increase during quarantine

Press release
Published June 14th, 2020 - 01:57 GMT
Block the installation of programs from unknown sources in your smartphone’s settings
Highlights
Only install mobile applications from official app stores, such as Google Play on Android devices or the App Store on iOS

Reviewing the statistic of cyber-attacks on smartphone users, the researchers saw that in the period of January – June 2020, the number of malicious attacks on mobile users reached 68,063. The overall dynamics were clearly showing that quarantine did not have a particular influence on the the United Arab Emirates threat landscape. To compare UAE with other Middle Eastern countries, the figure for Egypt is 220,000, Saudi Arabia saw 160,000 attacks in 5 months, followed by Kuwait (20,000) and Oman (15,000).

As mobile platforms influence grows, the role of smartphones in business processes and day to day life is growing rapidly. In response, cybercriminals are paying more attention to how they are distributing malware and the attack vectors used, increasing their activity in times of crisis. In many scenarious, a properly chosen timing can be a key part of the success of a malicious campaign today, taking advantage of those users who are changing their security practices under pressure and do not have any reliable security solutions installed on their phones.

Throughout the year, the number of attacks was not changing dramatically, which means that the implementation of quarantine measures did not influence mobile threat landscape in the region. It would account for approximately 11,000 – 14,000 attacks monthly. This can be explained by the fact that mobile platforms were initially made to be independent from the physical location of the user and are adjustable to different lifestyles. 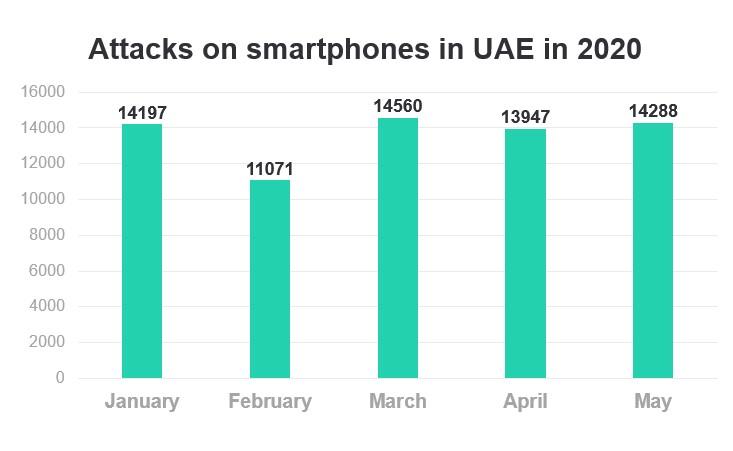 “While 14,000 attacks on mobile users every month may seem to be a big number, it is great to see that UAE smartphones’ and tablets’ owners remained vigilant during the crisis and did not fall for scammers tricks. - says Victor Chebyshev, security expert at Kaspersky. – Every system has a vulnerability, but human factor is often considered the greatest of them, so seeing that there is no increase in attack that reached users and were blocked by our products during a shift to work from home and global pandemic is reassuring”

In order to protect your devices, Kaspersky security experts advise the following:

Kaspersky is a global cybersecurity company founded in 1997. Kaspersky’s deep threat intelligence and security expertise is constantly transforming into innovative security solutions and services to protect businesses, critical infrastructure, governments and consumers around the globe. The company’s comprehensive security portfolio includes leading endpoint protection and a number of specialized security solutions and services to fight sophisticated and evolving digital threats. Over 400 million users are protected by Kaspersky technologies and we help 250,000 corporate clients protect what matters most to them. Learn more at www.kaspersky.com.