Recession or Depression? Where Is the World Heading and How to Handle it?

After meeting with the financial committee that represents 189 countries, Managing Director and Chairman of the Executive Board of the International Monetary Fund (IMF) Kristalina Georgieva concluded that the world has now entered "a global recession".

IMF’s Managing Director Kristalina Georgieva said ‘it is clear’ the world has entered a recession as the coronavirus pandemic virtually halted countries and their economies. Follow for live updates: https://t.co/ngGkvYL3tR pic.twitter.com/YyyYGWIA0i

Georgieva's announcement which didn't surprise any of the world economies was followed by a call to international parties "to set massive spending plans" that can help minimize the damage expected over the next few months.

The IMF director also revealed that emerging economies will need at least $2.5 Trillion in financial resources to overcome the current crisis.

Although this is not going to be the first recession during the 21st century, the current slowdown triggered by the coronavirus outbreak has the potential to be more devastating than the others, especially if it turns into a depression.

But, what's the difference between an economic recession and a depression?

The National Bureau of Economic Research has presented one of the most commonly used definitions of an economic recession, describing it as "a significant decline in economic activity spread across the economy, lasting more than a few months, normally visible in real GDP, real income, employment, industrial production, and wholesale-retail sales". 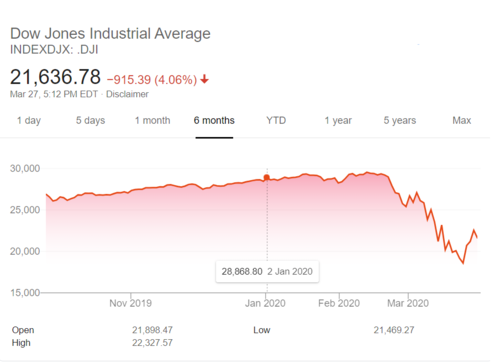 Recessions have usually been perceived as a few months to 1 year of economic crash mostly evident in stock markets' tendencies, in addition to tumbling GDP and unemployment rates.

On the other hand, most economists have agreed that the main difference between a recession and a depression lies in the length of the period through which the economy continues to slow down with no signs of recovery soon.

Economic depressions are supposed to witness deep shrinks in terms of stock markets, GDP, employment rates, and domestic production and manufacturing in general.

This year, Wall Street has been more volatile than ever with Dow Jones Industrial index dipping from about 29k points by the beginning of 2020 to record 18k points three months later.

The latest sign the recession is intensifying: White-collar workers are being laid off now https://t.co/uXw1WA9U7f

The unemployment rate in the US has also climbed to a historic high with about 3.3 million people, while world figures are expected to spike with millions of people reporting being laid off internationally since the COVID-19 outbreak.

When economies contract, governments usually resort to regulating policies by offering relief programs aimed at boosting production through injecting markets with financial aid and reducing tax rates until markets recover and get back to making profit again.

In spite of being a very unfortunate economic phase, economists often point out that recessions are a natural part of business cycles that policymakers and investors can only react to by working on ending it as fast as possible.

“By now, most analysts agree that we are about to witness a downturn that will dwarf the Great Recession. A comparison to the 1929 Great Depression may be more appropriate.”https://t.co/wCuuiJBo9O

Being the largest economy in the world, recessions have usually become global only once the US economy was diagnosed with one.

Since its foundation in 1776, the United States has witnessed more than 30 different recessions, most of which took place during the 20th century, and only one during the 21st century.

"The Great Recession" of 2007 was triggered by a mortgage crisis and lasted for 18 months, making it the longest recession in American history. During the Great Recession, the US suffered a 5.1% decline in GPD, as unemployment rates spiked by 10% in October 2009.

The scariest unemployment chart in the history of the United States. This is much bigger than the 2008 Great Recession. If there was ever a time to consider a guaranteed basic income for all Americans - it's now.https://t.co/K279jYr6KT pic.twitter.com/FT13Nffbtg

In 1919, the US economy entered a 7-month recession following the Spanish Flu pandemic, infected more than 500 million and killed about 50 million people who made up about 3% of the world's population at that time.

Many of the early US recessions were linked to wars ending in different parts of the world, most notably the 1945 and 1950 recessions following WWII and the Korean War, where the US economy was pressured by a drop in military weapons sales.

In 1973, the country lived through another 16-month long recession triggered by rocketing gas prices in what was known as the Oil Embargo, which was imposed by several Arab countries against Western ones including the US, in the aftermath of the 1973 military confrontation between Egypt and Israel.

While the US economy was always able to recover from months-long recessions using stimulus packages and monetary policies, it experienced one bitter depression in 1929.

Continuous contractions in the US economy during 1929 lasted for 10 full years, which made it qualify for the term 'depression'.

It took the S&P 500 only 22 trading days to fall 30% from its record high, making it the fastest drop of this magnitude in history, according to BofA.
The second, third and fourth quickest 30% pullbacks all occurred during the Great Depression era.https://t.co/bP0JXGsOUT pic.twitter.com/FJIQrxcdDP

Triggered by a stock market crash in 1929, the Great Depression resulted in historically high unemployment rates reaching about 25%. This economic failure was also associated with the term "Dust Bowl" referring to the severe drought and the bad farming practices the country lived through at that time. Analysts also blame protectionist financial policies adapted by then-US President Herbert Hoover for the severe plunge of that year.

As soon as he was elected president of the United States in 1933, Franklin D. Roosevelt designed 'The New Deal' plan with the goal of ending the economic plight.

During the Great Depression, FDR's New Deal offered relief to struggling Americans. One of the bills he signed (that doesn't get a lot of coverage) was the revised Frazier-Lemke Farm Bankruptcy Bill which protected farmers from bank foreclosures. #APUSH pic.twitter.com/XSd4TiYlzc

While a global recession seems to be looming in the air already, especially after the IMF announcement, only the severity of the consequences and the world's ability to control the coronavirus soon enough for the economy to make a quick recovery, can determine whether we are heading towards a long-term deep recession termed as 'depression' or not.