Report: Nearly 48% of Consumers Unable to Give up Their Phones for One Day

Published August 5th, 2019 - 08:30 GMT
Sales of Digital Assistants such as Amazon Alexa and Google Home have grown quite rapidly during the last year. (Shutterstock)
Highlights
When asked how online digital technology has impacted their lives, nearly 80% of global consumers said it has improved things

State of Digital Lifestyles 2019 Report Show Adoption of Digital Assistants Up 47% in the Last Year But It’s Our Mobile Phones We Can’t Live Without.

Limelight’s State of Digital Lifestyles 2019 report shows consumers overwhelmingly think online digital technology has improved their lives and are streaming and downloading digital media more than ever before. However, they remain frustrated by the process of using digital content, while online security concerns continue to grow.

First, the good news. When asked how online digital technology has impacted their lives, nearly 80% of global consumers said it has improved things, with 35% saying it has brought about significant improvements. Only 4.5% feel it has made their lives worse.

Consumers in India are the most optimistic, with 69% feeling online technology has significantly improved their lives. Those in Japan are the least optimistic, although they too overwhelmingly feel the impact has been positive.

Sales of Digital Assistants such as Amazon Alexa and Google Home have grown quite rapidly during the last year. More than 28% of global consumers now own one of the devices, up 47% from last year’s survey.

However, while consumers are increasingly using Digital Assistants, they aren’t considered an essential tool by most users. It’s our mobile phones we depend on more than any other device.

In fact, nearly 48% of global consumers would be unable to give up their phones for a full day.

When it comes to accessing online digital content, music is the clear choice, with 39% of consumers downloading or streaming digital music daily. 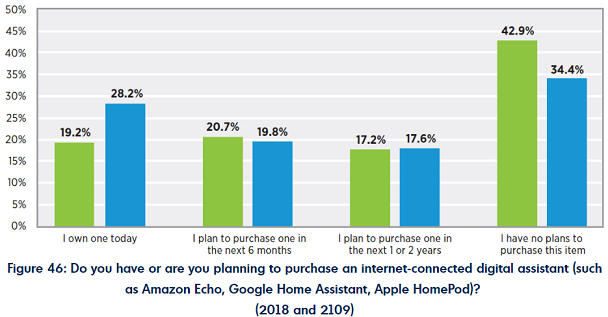 Movies and TV shows are the second most popular digital content, with 33% watching daily. Online streaming is the preferred way to watch digital movies and TV shows, with two-thirds choosing to stream online rather than download to watch offline or watch DVDs.

Now, the bad news. Although consumers are accessing more digital content than ever, they find the process challenging. In fact, more than 76% of people are frustrated by the use of digital content, with the primary complaints being errors that disrupt the experience and rebuffering.

Security concerns are also rising. More than 45% of people are more concerned about their personal information being stolen online than they were a year ago.