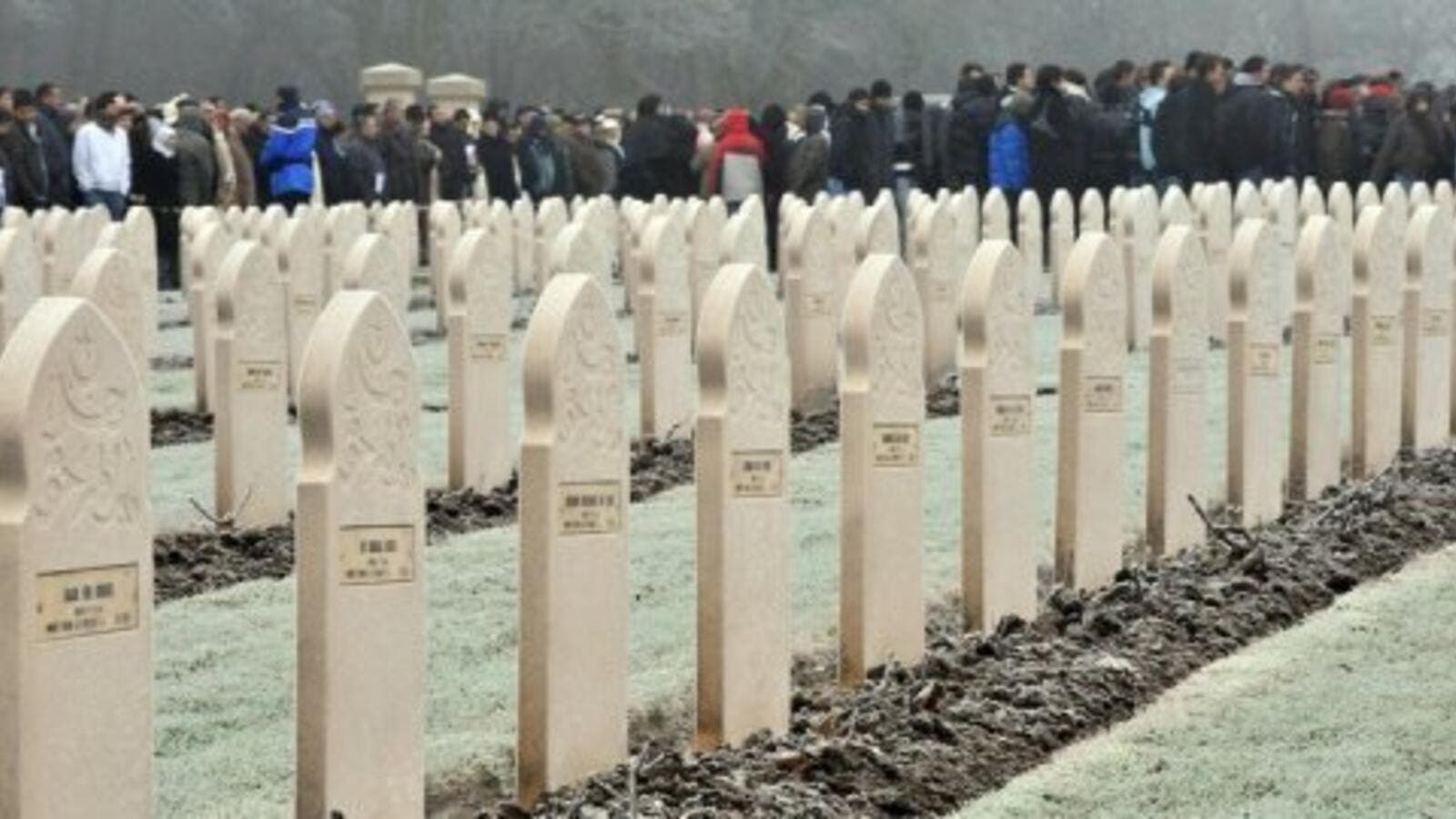 With a lack of regulation, the children work long, continuous hours. They do not sneak into the cemeteries and do not hide during the day.

Al-Akhbar met the children at the two neighboring Beirut cemeteries of al-Shuhada and al-Shahidain. As soon as the children spot someone walking toward a grave, they approach and offer condolences. One child holding a bucket of water stands next to the family of the deceased, then, just as the family does, lifts his hands to the sky. He asks: “May God rest his soul, do you want me to clean the grave?”

After cleaning the grave and collecting his compensation, he rushes back to a football game being played between the graves. Youssef, 13, works alongside his 10-year old cousin Mohammed, cleaning graves and assisting in other burial rituals, like reciting Quranic verses and covering bodies in shrouds.

The two children are Syrian, displaced with their families and now living in the working-class area of Farhat. Their fathers decided to put them to work at Rawdat al-Shahidain cemetery in the Ghobeiry area. Mohammed’s father also works at the cemetery and keeps an eye on them. He is careful not to let them chatter away for too long while there are visitors at the cemetery.

The boys do not squander any chance to hold on to any semblance of childhood as they play between the graves. Mohammed said, “Why should we be afraid? They are dead and in their graves.” Youssef waxed philosophical about having lost the fear of death: “We distract ourselves with playing. There is nothing scary – the dead are not going to rise again.”

Mohammed and Youssef are not the only children working in cemeteries. There is also Mohammed and Abdullah Shari, two kids from South Lebanon. They work at al-Shuhada cemetery adjacent to the Khashiqji mosque in Beirut.

When asked why he is at the cemetery, Abdullah said shyly, “I’ve been here for a long time, there is no one else to provide for my sisters.” After completing their sweeping, the two boys ran away to divide the money. Then, a disagreement erupted between them. Mohammed returned and asked: “Aunty, these are mine and his or just his?”

Who Is Responsible for Child Labor in Cemeteries?

The cemetery management at the Makassed Philanthropic Islamic Association, which is responsible for al-Shuhada cemetery, was surprised at the presence of children working in the cemetery. In a call with Al-Akhbar, the association denied knowledge of any such labor, even though its employees are responsible for the management of cemeteries.

As for the Endowments Committee at the Higher Islamic Shia Council, which is directly responsible for managing al-Shahidain cemetery, there was a sense of uneasiness and conflicting claims among its members.

Committee member Mansour Mansour argued that child labor is “the responsibility of the Lebanese government and not the committee.” He said, “When the government pulls children off the streets, we will pull them out of the cemeteries.” Yet at the beginning of the conversation, Mansour denied there were even children working in the cemeteries. He then asserted that cemetery guards cannot prevent anyone from entering, and said, “They do what they want.”

With a lack of regulation, the children work long, continuous hours. They do not sneak into the cemeteries and do not hide during the day. That was clear throughout Al-Akhbar’s tour of the cemeteries. However, despite a prior request from the management at al-Shahidain cemetery to take pictures, the photographer was not allowed to snap photos of the children at work. The management at the Makassed Association refused to grant permission to bring a camera into al-Shuhada.

The Government Turns Its Back

Lebanese MP Michel Moussa, head of the parliamentary Human Rights Committee, told Al-Akhbar, “The Lebanese law is clear in this respect, any kind of child labor is prohibited. The Labor Ministry has developed a project to regulate this issue, but it was put on hold.”

Yet once again, administrative bureaucracy in Lebanese institutions poses an obstacle to taking action on this matter. All the parties responsible are quick to lay the blame at each other’s feet, while the two Mohammeds, Youssef, Abdullah, and many other children sacrifice their childhoods to earn a precarious living from the dead.