Published September 8th, 2019 - 06:21 GMT
It's not the first case of a tourist being overcharged at a restaurant. (Shutterstock)
Highlights
The incident came to light after a plea on social media.
An American tourist was shocked when she discovered she had been charged over 10,100 Israeli shekels (Dh10,500 approx) for a single plate of shawarma meat at a restaurant in Jerusalem.

According to a report on The Independent, the incident came to light after a plea on social media on August 29.

Laura Ziff wrote on Facebook page: "I need help please. Can someone provide the address for a restaurant right by the Jaffa gate called "Old City Shawrma (sic)". That is the name on the receipt that I received. Also if the restaurant possibly has a different name in Hebrew."

The restaurant's owners had made a mistake and that she was charged $2,900 for a single shawarma plate, the post reads. 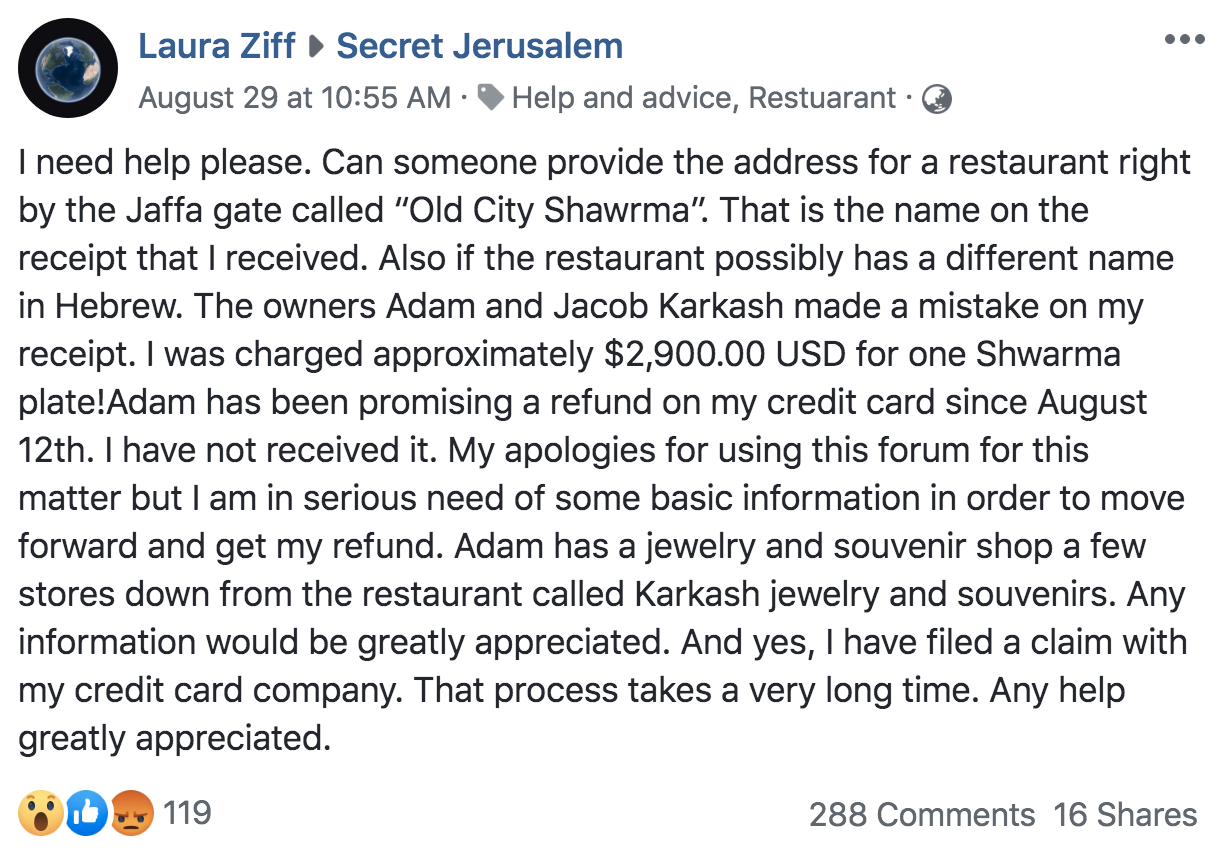 A receipt of the transaction showed that she was charged 10,100 Shekel, which is worth around £2,329.

Laura claimed that the owners had made a mistake and promised to refund her credit card, but she still hadn't received anything.

Laura updated post on September 2 and wrote: "I have received phone calls and texts from the business owner Hasan and his brother Adam.

"They both apologised that the refund had not been completed and had been trying to work with their bank. I contacted my credit card company and they provided some additional information that should assist Adam in making the refund happen very quickly," she added.

On September 3, she said a man had been in touch to help with the refund.

She said: "As of this morning we spoke and he provided proof that the owners of the restaurant have contacted the bank and are in the process of refunding the money.

"I absolutely believe him. I am assuming that my next post will say that the funds are in my account and the matter is closed.

"I expect that due to bank issues this may take a few days. "

It's not the first case of a tourist being overcharged at a restaurant, the report added.

Earlier this year, an American tourist was charged £521 for just six pieces of calamari in Greece. The restaurant was later raided by the police. At another location in Greece, a group of Brits were charged £72 for soft drinks.