What Was in Elon Musk’s Warning Text to Twitter's CEO?

The dispute between Tesla CEO Elon Musk and Twitter is taking many twists and turns.

As per new reports, Musk recently, but before pulling out of the deal, sent a text to Twitter CEO Parag Agrawal on June 28, informing him that the company's lawyers were trying to "cause trouble" after they sought information on the financial details that Musk was planning to complete the acquisition of Twitter. 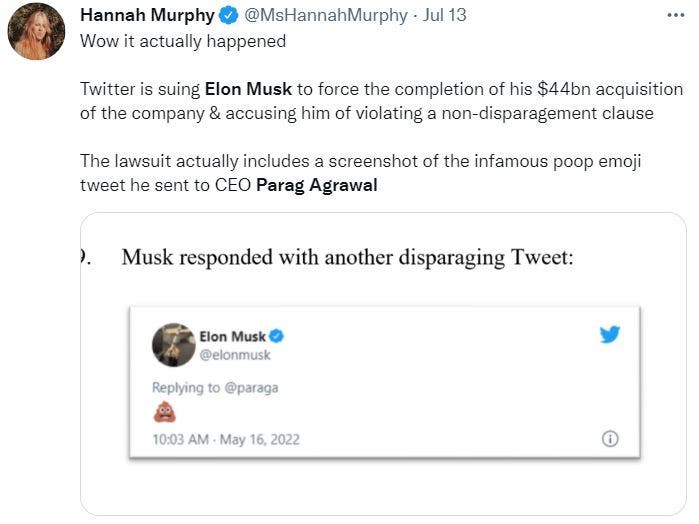 "Your lawyers are using these conversations to cause trouble. That needs to stop," Musk's text reportedly read. Musk sent the particular message after Twitter asked Musk how he would finance the Twitter deal.

A few days ago, Twitter sued Musk after he decided to back out of the USD 44 billion takeover deal.

As per The Verge, the lawsuit was filed in Delaware's Court of Chancery on Tuesday, accusing Musk of hypocrisy."

Twitter brings this action to enjoin Musk from further breaches to compel Musk to fulfil his legal obligations and to compel consummation of the merger upon satisfaction of the few outstanding conditions," Twitter wrote in the lawsuit.

The lawsuit marks the beginning of what could be a protracted legal battle as Twitter seeks to hold Musk to his deal to pay USD 54.20 per share for the company. Twitter, which is being repped by M&A powerhouse law firm Wachtell, Lipton, Rosen & Katz, alleged that Musk looked for an escape from the deal, which required a "material adverse effect" or breach of contract."

Musk had to try to conjure one of those," the lawsuit stated. Musk announced the termination of a USD 44 billion Twitter purchase deal in a letter sent by Musk's team to Twitter earlier this month.

Musk decided to suspend the deal due to multiple breaches of the purchase agreement.

In April, Musk reached an acquisition agreement with Twitter at USD 54.20 per share in a transaction valued at approximately USD 44 billion.

However, Musk put the deal on hold in May to allow his team to review the veracity of Twitter's claim that less than 5 percent of accounts on the platform are bots or spam.

Back in June, Musk had openly accused the microblogging website of breaching the merger agreement and threatened to walk away and call off the acquisition of the social media company for not providing the data he has requested on spam and fake accounts.

Musk alleged that Twitter is "actively resisting and thwarting his information rights" as outlined by the deal, CNN reported, citing the letter he sent to Twitter's head of legal, policy, and trust, Vijaya Gadde.

Musk demanded that Twitter turn over information about its testing methodologies to support its claims that bots and fake accounts constitute less than 5 percent of the platform's active user base, a figure the company has consistently stated for years in boilerplate public disclosures.