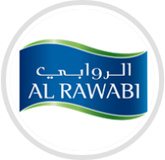 Al Rawabi Dairy Company is a leading dairy and juice company in the UAE with a wide range of products from milk, yoghurt, laban, juice and functional products. Currently, Al Rawabi operates in the UAE, Oman and Qatar serving more than 12,500 stores with fresh products.

At its farm in Al Khawaneej, Al Rawabi has a cattle stock of 13,500 cows. Starting in 1989 with 500 imported cows, Innovation is at the core of the company - it introduced the plastic bottles in 1991 in the UAE and is the first company to introduce fresh juices in the GCC in 1995. It is also credited with introducing pasteurized juices in the region and functional products in the dairy industry - such as Nutree Boost and Super Milk.

The new functional products are enriched with multivitamins and minerals, and designed to help solve the health concerns of the GCC population. The company is awarded with ISO 9001:2015, ISO 14001:2015, ISO 22000:2005, HACCP and OHSAS 18001:2007 and has received many local and international recognitions, such as AgraME Award for Best Dairy Innovations in the UAE, Dubai Municipality Award for Excellence in Animal Welfare, Super Brand Award, Best Environmental Practices award as well as being listed among the 40 strongest brands in the Arab World by Forbes Magazine in 2008 and 2015 respectively.

Al Rawabi Dairy Company, the largest UAE-based dairy company, by herd size and production, today welcomed participants to the Risk Management in Mega Agricultural Projects training organized by the University of Wisconsin-River Falls. Around 50 professionals in Farming sector from Middle East and Africa attended the training sessions which aim to transfer knowledge and build capacities of personnel working in the agricultural sector as the main core of food security in a world facing challenging situations of climate change and scarcity of resources. “As a market leader in the UAE ...
Read more