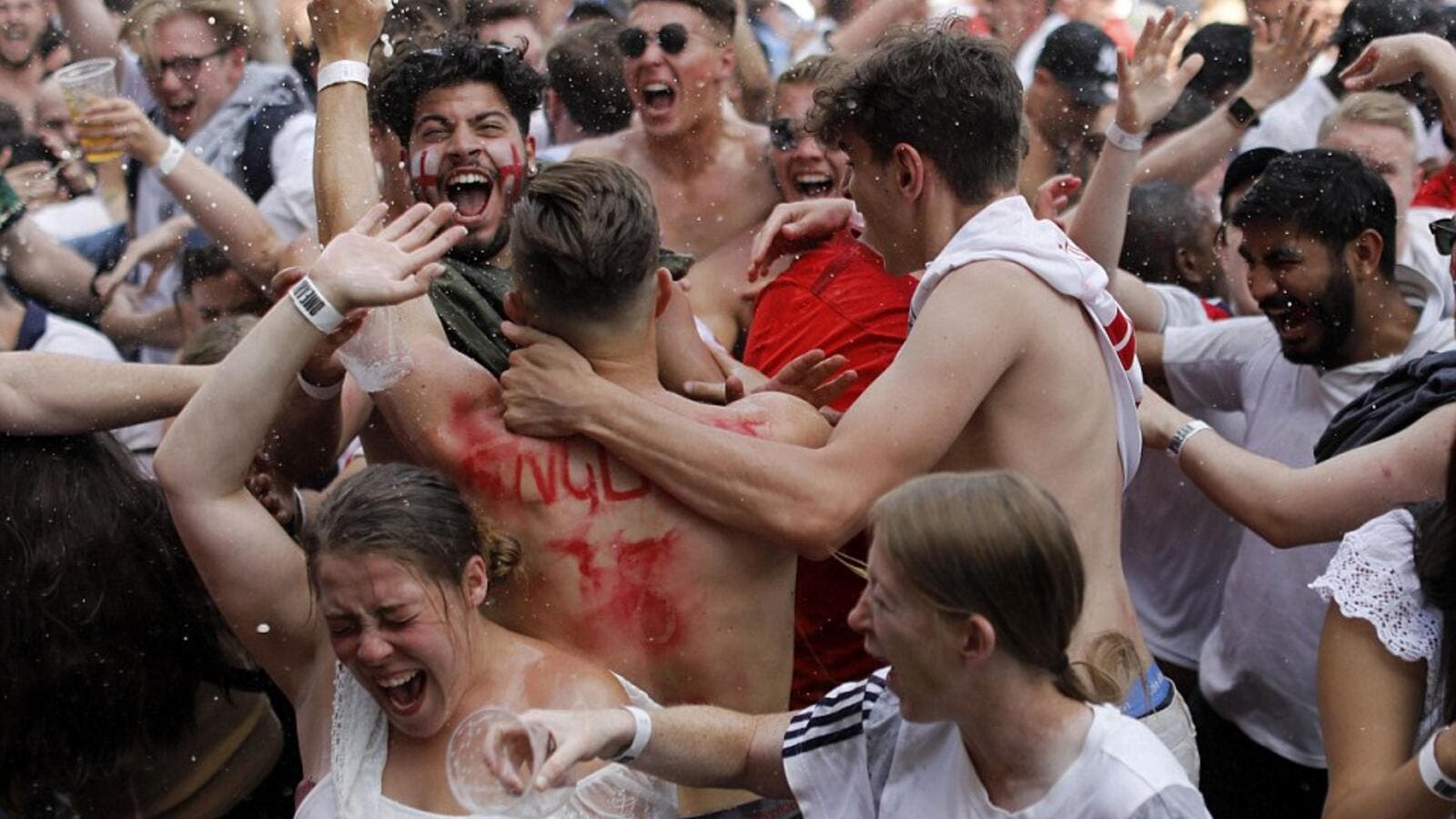 These fans in London could be seen cheering wildly and throwing beer around as Dele Alli added a second goal for England against Sweden. (AFP/ File Photo)

Emergency services begged World Cup revellers not to cause mayhem on the streets of England as fans jumped on ambulances, buses, and cars as they celebrated the stunning win.

An ambulance car was trashed by a huge crowd of revellers in London jumping on it, leaving the windscreen smashed and the bonnet so severely dented the vehicle had to be taken off the road.

Other football fans danced on buses singing the Three Lions song, rode on moving cars almost causing causing a family to be mowed down, and climbed lamp posts after heavy drinking.

Several were arrested near London Bridge station as high spirits led to fights on side streets that had to be broken up by police and the combatants dragged away in handcuffs.

The antics were in contrast to more responsible fans who were cheering, singing and jumping around celebrating the 2-0 win over Sweden while dousing one another in beer as they celebrated the goals.

They had queued up for four hours outside pubs in boiling heat to watch the Three Lions take on Sweden in their quarter final clash.

Other fans got a bit over-excited by England's first quarter final win since 1990, participating in some over-the-top antics frowned upon by authorities.

Several celebrating fans jumped on the bonnet of an emergency vehicle in Borough High Street, leaving it severely dented - much to the annoyance of London Ambulance.

'Obviously we are chuffed with the result this afternoon but there is absolutely NO excuse to vandalise emergency service vehicles by jumping on them,' it wrote on Twitter.

'This vehicle is now off the road and unable to respond to patients. We are better than this England.'

Other fans were seen riding on the bonnet of a car driving through a street crowded with celebrating revellers soon after England's victory.

The two shirtless lads raised their beers to their compatriots, who cheered them on until a near miss at a pedestrian crossing.

The driver, who clearly couldn't see past the men blocking his windscreen, almost crashed into a a family crossing the street with their dog.

The mother and father were barely able to jump out of the way as the car screeched to a halt too late, pulling their small child out of the way by inches.

Other shirtless fans were seen dancing on the top of buses while waving their drinks in the air along with England flags as traffic was brought to a standstill.

But it didn't go too well for one man in Clapham Junction, London, who jumped off the roof of a bus on to the top of a bus shelter while singing the Three Lions song - but went straight through the glass.

Elsewhere, fans caused pandemonium in Nottingham as they smashed cars and destroyed an entire bus stop as celebrations got far out of hand.

They waited a long time for the party with some fervent football fans were pictured standing outside pubs in London as early as 10am this morning in sizzling 91.5F (33C) heat to secure a space inside.

In Birmingham, fans took a seat on the canalside ahead of the game and sipped on pints in the sun.

At the Rose and Crown pub in Wimbledon village, scores of fans gathered for the England game, including many who have left the tennis at Wimbledon.

Those who have tickets for Saturday's tennis have been issued with pink and blue re-entry wristbands.

There were chants of 'get the tennis off' as fans waited eagerly for the football to be put on the big screens.

Clive McCabe, from Twickenham, has seats on Court One but has left to watch the football.

He said: 'It's the most people who have left Wimbledon on middle Saturday between 1pm and 2pm.'

He added: 'There's more people leaving than going in.'

The group who headed out in Nantwich to catch the game wore light blue shirts and a stripy ties, and even wore with paper masks with the manager's face on.

Last week, M&S revealed that sales of waistcoats, which Southgate has worn for every one of his four touchline appearances at England's matches, have rocketed by 35 per cent since the tournament began.

Elsewhere, crowds flocked to outdoor big screens in cities including London, Birmingham, Liverpool, Manchester, Newcastle, Bristol, Exeter and Leeds to make the most of the beautiful weather while watching the game.

To help keep cool - or steady the nerves - 38 million pints of beer are set to be drunk by fans as the latest chapter in captain Harry Kane and the team's Russian adventure triggers a £190million big-game drinks and food spree.

Some 18 million pints are expected to be downed in pubs - seven million more than usual - with pub takings soaring to £100 million as a predicted 3.5 million fans pack the country's 40,000 pubs to watch the match.

At home, 20 million pints are expected to be drunk today costing around £22 million, the British Beer and Pub Association (BBPA) said. Food spending on the match will add up to another £30 million in pubs and £40 million at home.

However, not all of the UK was getting behind the Three Lions.

Swedes and Scots packed into Akva, a Swedish bar in Edinburgh's west end, to watch the match.

There was Swedish bunting and flags, with many fans wearing the side's yellow strip.

A faulty connection added to the tension outside in the beer garden, where supporters groaned as the large screen showing the game repeatedly cut off.

With so many watching the match, the nation will come to a halt with roads, high streets and train stations likely to be empty during the quarter-final, which will be shown live on BBC1.

The RAC said it expects 'the quietest Saturday afternoon of the year, with deserted roads.'

Elsewhere, shops and streets were deserted as everyone headed to the nearest screen to catch the game.

Bluewater in Kent, one of the country's biggest shopping centres was like a ghost town.