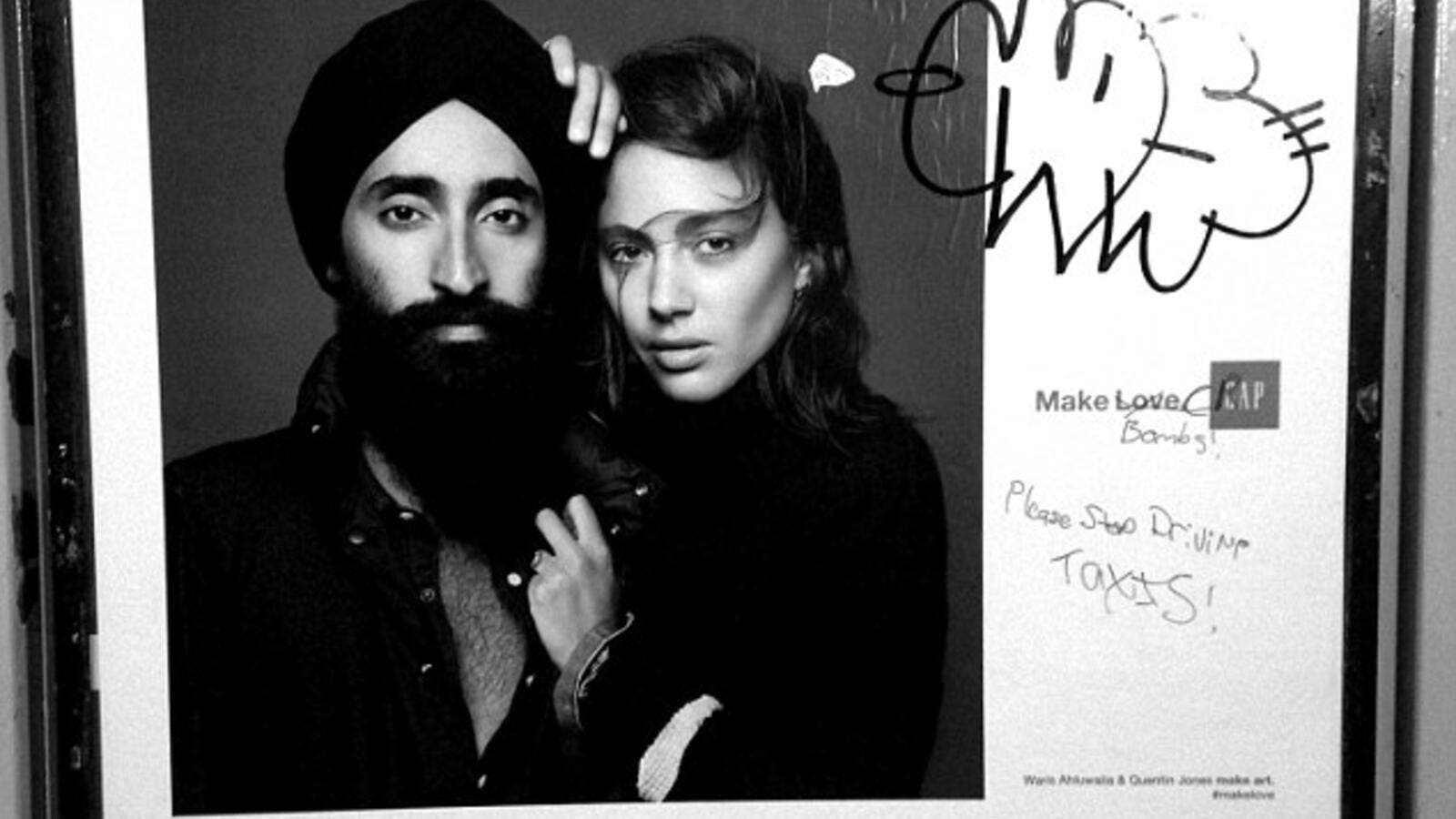 GAP, a leading American brand for clothing and accessories, recently had to face full-blown public racial attack on its "make love" campaign.

A simple classic-looking GAP poster featuring Indian-American designer and actor Sikh Waris Ahluwalia posing with model and filmmaker Quinith Jones was defaced in a subway station with racist messages by vandels. The caption on the ad "Make Love" was altered to "Make bombs" and the poster also had "Please stop driving TAXIS" written onto it by the culprits.

The vandalized ad was originally found and captured by New York photographer Robert Gerhardt on the downtown platform of the Buhre Avenue 6 train stop in the Pelham Bay section of the Bronx. Gerhardt forwarded the images to Arsalan Iftikhar, senior editor of The Islamic Monthly, shared it with his near 40,000 cumulative followers on Twitter and Facebook. The ad showed Ahluwalia sporting a thick beard and a turban, both of which are indicative of his Sikh religion.

Iftikhar told MailOnline that the photo made him want ‘the world to see how brown people are viewed in America today.’

The picture soon went viral and took the Internet by storm. The picture received a wave of responses, many of which expressed outrage over the graffiti.

‘[This] makes me very very sad. The world is becoming more hateful,’ responded one Twitter follower. ‘Sadly typical,’ replied another.

GAP immediately got in touch with Arsalan on twitter and asked him for the whereabouts of the defaced ad. Then, to show solidarity with its Sikh model Waris Ahluwalia and back its ad, GAP changed its display image on its Twitter page and Facebook to that of its ad which featured Waris.

Gap also released a statement about the episode to HLN: “Gap’s marketing campaign is about inspiring people to fill the world with love this holiday season. It features a range of cultural icons, including actors, singers and artistic collaborators, chosen for the ways they are spreading and creating love in the world…Gap is a brand that celebrates inclusion and diversity. Our customers and employees are of many different ethnicities, faiths, and lifestyles and we support them all.”

Gap spokeswoman Kari Shellhorn told The News that the company plans to erase all signs of the offensive remarks.

"We are working quickly to replace the vandalized images," Shellhorn said.

Iftikhar told The Daily Mail, "This whole story just proves that we do not live in a post-racial America yet when South Asians and those perceived to be Muslims cannot even grace fashion advertisements without racial epithets being directed their way."

Many may not recognize Ahluwalia, but he is a heavy hitter in the fashion world, a high-end jewelry designer and actor. He’s popped up on numerous “best dressed” lists and is known for his signature look. Ahluwalia has come to be seen as something of a role model for Sikhs, according to Kanwar Singh, a practitioner of the faith who lives in Richmond, Va.

While some members of the community have criticized Gap for using the image of a Sikh man to sell their clothes, others are glad to see support from such a large American company.

“What Gap has done is they’ve placed a Sikh model on advertisement all across America,” Singh said. “Our community woul d never have been able to afford that kind of campaign.”

“We are grateful every single day to people in our community who recognize and support us,” Singh said.