$10 Million Each! Melinda Gates May Want to Give Her Kids Much More in Her Divorce Deal!

Published May 18th, 2021 - 12:35 GMT
Bill and Melinda Gates (Twitter)
Highlights
Melinda released her first public statement in the wake of the divorce announcement in a sweet Twitter post for Mother's Day, where she hailed the 'resilience' of moms.

Melinda Gates could seek to use her blockbuster divorce from Bill Gates to increase her three children's inheritance from the $10million her estranged husband publicly vowed to give each of them. 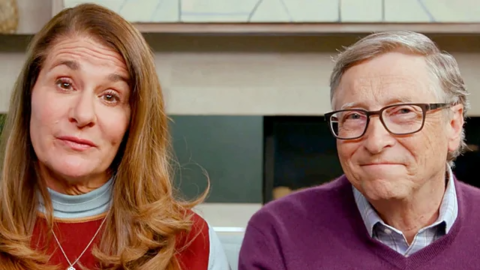 What Will be The Future of The Gates' Charity After The Divorce?

In a move divorce experts say is highly unusual, Melinda has added top trust and estate lawyers to her legal team as she and Microsoft founder Bill divide their combined $130billion in assets after 27 years of marriage.

Celebrity divorce attorneys Harriet Newman Cohen and Martha Cohen Stine explained the potential significance of the unlikely representation to Page Six on Monday - speculating that it could signal Melinda's desire to alter the inheritance for her and Bill's three kids - Jennifer, 25, Rory, 21, and Phoebe, 18.

Over the years Bill has repeatedly said that he would leave the children a mere $10million apiece - accounting for less than .008 percent of their parents' total wealth.

But Melinda may be eyeing a different plan for the kids' financial future, and could use the trust and estate lawyers in her divorce to make it happen, according to Newman Cohen and Cohen Stine.

While the pair are not involved in the Gates divorce, their speculation is supported by their ample experience with high-profile splits - including those of New York Gov Andrew Cuomo, Harvey Weinstein and Howard Stern.

The speculation comes as Bill weathers heightened criticism after admitting that he had an affair with a Microsoft staffer while he was married to Melinda in 2000 and growing scrutiny over his close relationship with pedophile financier Jeffrey Epstein, from whom he allegedly sought marital advice.

'Bill Gates proudly announced to the world he was leaving $10million to each of his three children, and that the rest of the billions will be left to charity,' Newman Cohen said.

'Now that Melinda has control — maybe she wanted to leave more to her children than $10 million each. Maybe she didn't agree.'

The lawyer said that giving the kids just $10million out of their parents' total wealth is 'tantamount to disinheriting [them]', adding: 'We see divorces for the reason that the mother wants to protect the children. She may be like every other woman… protecting her children.'

Bill has previously signaled that he and Melinda came to the decision about how much their children would get together, telling a Reddit forum: 'I definitely think leaving kids massive amounts of money is not a favor to them.

'Some people disagree with this but Melinda and I feel good about it.'

The divorce petition Melinda filed on May 3, the same day she and Bill publicly announced their split, indicated that the couple had reached a 'separation contract' outlining how they planned to divide their estate - which includes properties in five states, a private jet, an astonishing art collection and a fleet of luxury cars.

Exclusive: The breakup of Bill and Melinda Gates’s marriage is shedding new light on an open secret within Microsoft and his foundation: Gates has at times behaved badly in work-related settings.

In the absence of the pre-nuptial agreement, the only agreement pertaining to the divorce is the separation contract.

If inheritance was not addressed in that contract - which has not been made public - either party could seek to change the amount.

Melinda did not ask for any spousal support but requested a trial date in April 2022. However it is likely the divorce will be settled without a trial.

Melinda is being represented by estate planning attorney Loretta Ippolito of Paul Weiss, as well as the firm's top commercial litigator Bruce Birenboim.

Bill is represented by three Los Angeles-based attorneys from Munger Tolles & Olson. One of the founding attorneys, Charles T Munger, is a longtime partner of Bill's billionaire friend Warren Buffett.

Melinda released her first public statement in the wake of the divorce announcement in a sweet Twitter post for Mother's Day, where she hailed the 'resilience' of moms.

'I love being their mother,' she wrote in the caption of a throwback photo with her kids.

'Whatever Mother's Day means to you—a day to celebrate a mom, honor a memory, or reflect on your own resilience—I hope your day is a meaningful one.'

Last week Jennifer shared another post with a photo of her father Bill, writing: 'Nothing better than quality time with family members'.

“When you work at the foundation, your whole job in life is to protect and preserve and build up the reputation of Bill and Melinda Gates,” the person said.https://t.co/AAckBSWGlH

It's unclear where the picture was taken - Bill is an avid golfer and has reportedly been holed up at an exclusive golf club in California where he owns a mansion since news of the split broke.

Jennifer is the only one of her siblings to address the divorce publicly, posting the day of the announcement that it had been a 'challenging stretch' for the family.

Soon after reports emerged that the children were angry with their father over the split.

It comes as Bill has faced an onslaught of negative press, including recent claims that he had an 'inappropriate' sexual relationship with a female staff member in 2000, and resigned while an investigation into the relationship was being investigated by the company board.

The affair came to light after the Microsoft employee wrote to the board in 2019 detailing it - and allegedly asked that Melinda read the letter.

Gates, 65, quit the board suddenly in March 2020 while the investigation was still underway.

His spokeswoman confirmed there had been an affair almost 20 years ago but said his decision to leave Microsoft's board was not linked to it.

The revelation followed two bombshell reports on the unraveling of the couple's marriage.

The Daily Beast revealed Bill sought marriage advice from Epstein during dozens of meetings at his $77million Manhattan townhouse between 2011 and 2014, far more than had previously been reported.

And on Sunday, The New York Times reported that Gates asked two women who worked at Microsoft and his philanthropic foundation out on dates while still married to Melinda.

Melinda, who now goes by Melinda French Gates, was also upset at the way allegations of sexual harassment against Michael Larson, one of Gates' key lieutenants and the manager of his personal fortune, were handled.

The Wall Street Journal reported that the Microsoft board decided that Gates should step down after the relationship almost two decades earlier was deemed to be 'inappropriate'.

The same day Gates quit Microsoft he also announced he was stepping down from his position with the board of Berkshire Hathaway, run by his friend Warren Buffet.

In a press release the tech mogul said he would continue to serve as a technical adviser to Microsoft's Chief Executive Satya Nadella.

A Microsoft spokesman told the Wall Street Journal: 'Microsoft received a concern in the latter half of 2019 that Bill Gates sought to initiate an intimate relationship with a company employee in the year 2000.

'A committee of the Board reviewed the concern, aided by an outside law firm to conduct a thorough investigation. Throughout the investigation, Microsoft provided extensive support to the employee who raised the concern.'

A spokeswoman for Gates said his decision to leave the board had nothing to do with the affair, saying 'There was an affair almost 20 years ago which ended amicably.'

The spokeswoman told the Journal his 'decision to transition off the board was in no way related to this matter. In fact, he had expressed an interest in spending more time on his philanthropy starting several years earlier.'

Meanwhile, The Daily Beast reported that Gates told Epstein his marriage to Melinda was 'toxic', which both men found funny.

Did Bill Gates Have Affairs With Employees at Microsoft?

Gates suggested Epstein become involved with the couple's philanthropic organization and 'rehabilitate his image' after his 2008 conviction for soliciting a minor for prostitution, according to a person who attended the meetings.

Gates' visits to Epstein's 'lair' was an escape from the marriage, according to the source, who said the pair 'were very close'.