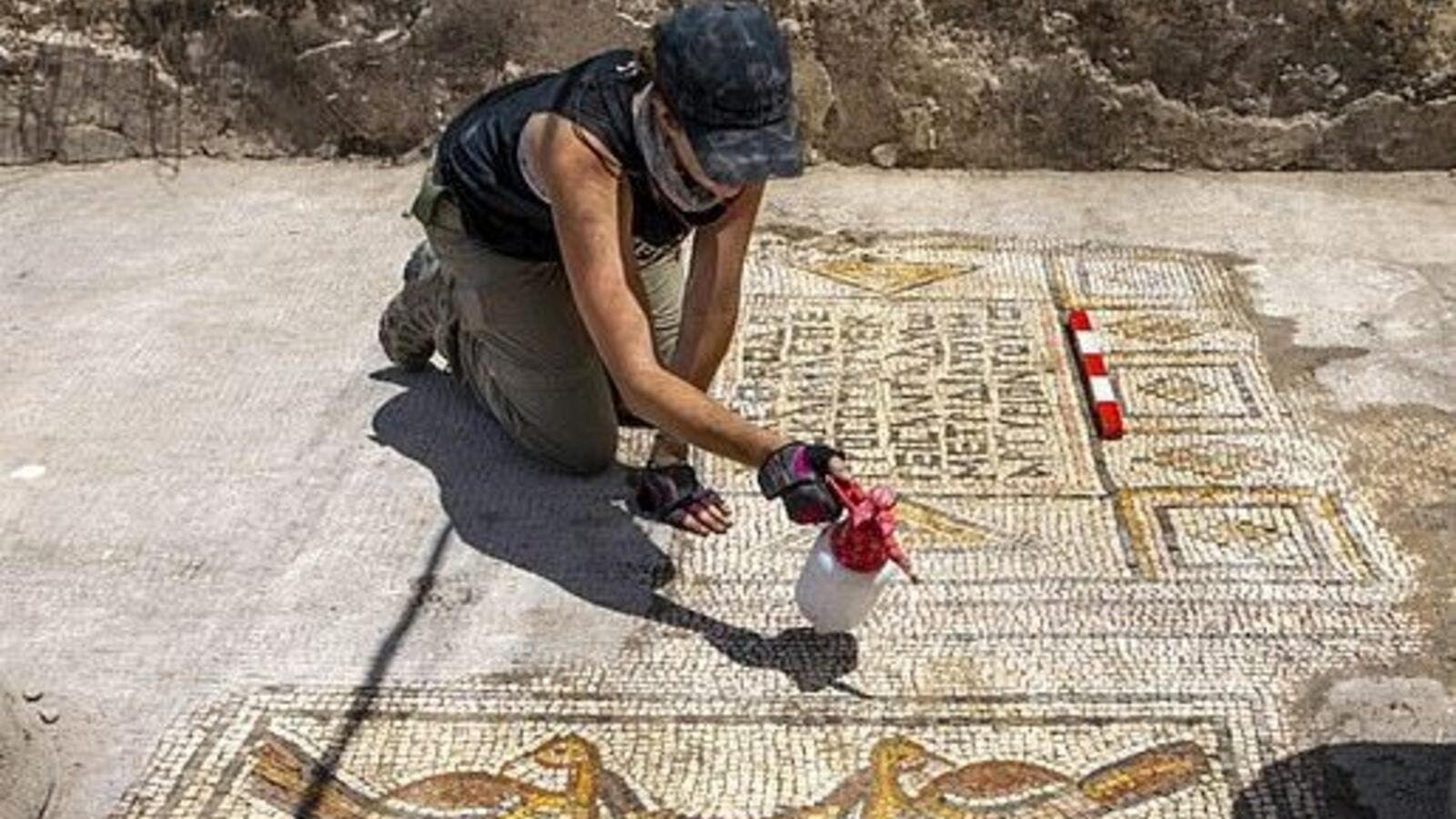 A 1,500-year-old mosaic depicting Jesus's feeding of the five thousand has been unearthed during an excavation of an ancient city near the Sea of Galilee.

The discovery of the so-called Burnt Church in Hippos, northern Israel, has enthralled archaeologists who have spent the summer combing it for historical evidence.

A fire destroyed the fifth-century church in 700AD but the mosaic-paved floor has been remarkably preserved throughout the centuries by a layer of ash.

Located in the heart of the Holy Land, Hippos overlooks the Sea of Galilee - also known as the Kinneret - where it was once the site of a Greco-Roman city.

The mosaic purports to capture one of the miracles referred to in the New Testament where Jesus used just five loaves and two fish to feed 5,000 people gathered on the banks of the water.

A team from the University of Haifa found the Burnt Church in 2005, but only began the dig this summer.

Head archaeologist Dr Michael Eisenburg said: 'There can certainly be different explanations to the descriptions of loaves and fish in the mosaic, but you cannot ignore the similarity to the description in the New Testament.

'For example, from the fact that the New Testament has a description of five loaves in a basket or the two fish depicted in the apse, as we find in the mosaic.'

He added that the generally accepted location of the miracle performed by Christ may have to be reconsidered in light of the new evidence.

The historian said: Nowadays, we tend to regard the Church of the Multiplication in Tabgha on the north-west of the Sea of Galilee as the location of the miracle, but with careful reading of the New Testament it is evident that it might have taken place north of Hippos within the city’s region.

'According to the scripture, after the miracle Jesus crossed the water to the northwest of the Sea of Galilee, to the area of Tabgha/Ginosar, so that the miracle had to take place at the place where he began the crossing rather than at the place he finished it.

'In addition, the mosaic at the Church of Multiplication has a depiction of two fish and a basket with only four loaves, while in all places in the New Testament which tell of the miracle, there are five loaves of bread, as found in the mosaic in Hippos.

'In addition, the mosaic at the burnt church has a depiction of 12 baskets, and the New Testament also describes the disciples who, at the end of the miracle, were left with 12 baskets of bread and fish.

'There is no doubt that the local community was well familiar with the two miracles of Feeding the Multitude and perhaps knew their estimated locations better than us.'

After centuries of falling into the hands of several empires and religious groups, Hippos was abandoned in around 600AD when an earthquake devastated the hilltop city.