Published June 17th, 2021 - 10:32 GMT
nice activewear to protect you while you work out (Twitter)
Highlights
'We knew it had to be comfortable and breathable, but most importantly, it had to serve its purpose of helping to protect against leakage.

Adidas has become the first leading sports brand to launch period-proof activewear - after shocking research found one in four teenage girls drop out of sport because they fear leakage. 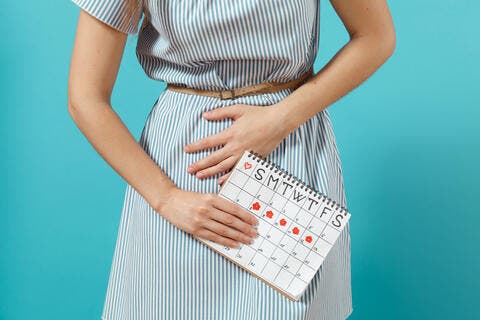 The Period in Egypt Continues to be a Stigma

The sportswear giant this week announced the release of its Stay in Play range, featuring £50 leggings and £35 bike shorts, both featuring an absorbent layer to help protect against leaks while wearing a tampon or pad.

While similar products are available from smaller labels such as Thinx and Modibodi - which focus primarily on providing period-proof underwear - adidas is the first major sports brand to launch a range of this type.

So much nice stuff to protect you while you work out https://t.co/YJJnYJFaZ0

Developed over the course of two years, the TechFit Period tights use 'Flow Shield' technology, which means the garments have a set of absorbent layers to help protect against leaks.

Three specially designed layers work together to provide the protection, whilst a bonding frame holds each layer together and keeps the tights in place.

The launch is part of adidas' long-term Watch Us Move campaign, dedicated to supporting women in sport and speaking about the collection, Kim Buerger, Senior Product Manager of Women's Apparel at adidas, said: 'We started designing this collection from the inside, out.

'We knew it had to be comfortable and breathable, but most importantly, it had to serve its purpose of helping to protect against leakage.

'The biggest challenge we faced in bringing the TechFit Period Proof Tights to market was the testing. It was incredibly rigorous and went through several rounds, because we had to be sure our product could deliver.

For many people who menstruate, exercise is off the cards during their period. In a landmark launch, @adidas is hoping to change that. The brand is introducing #StayInPlay period-proof leggings this month, backed by a global education campaign. https://t.co/h7dHYF37uy

'Our ambition with this product is to keep more people in sport by giving them the confidence to train on their period. We're so proud of what we were able to achieve, and look forward to introducing more product innovation in this space.'

Dr. Bruinvels said: 'It is great to see that the landscape for girls and women in sport is progressing, however it is evident that despite this, the menstrual cycle is still an area that is of embarrassment, and as a result is typically neglected and ignored.

'Given the impact that the menstrual cycle can have on participation and overall quality of life, this must change. Education is the ultimate starting point whereby those who menstruate can be empowered by an increased understanding of an essential physiological process.

'Education will enable progressive discussion, helping to break down barriers associated with physical activity and the menstrual cycle.

'We know, more than ever, the importance of exercise for both mental and physical well-being, and I am excited to see the positive impact this campaign will have.'

The launch follows controversy over period pants brand Modibodi, which last week came uder fire from women for a 'dangerous and offensive' graphic referring to someone using its products as a 'menstruating person'.

The ad was spotted by a would-be customer who wrote an angry post on the UK-based forum Mumsnet, explaining that she'd been put off making a purchase from the brand, which specialises in reusable leak-proof underwear for periods and incontinence.

After seeing the phrase 'menstruating person' in a graphic about the number of tampons used in a lifetime on the Facebook post, she said that she's determined to boycott the Australian brand.

Many commenters sided with the woman claiming the wording was 'offensive' and designed to 'erase women', although others claimed that taking issue with it was 'transphobic'.