Published July 1st, 2021 - 06:29 GMT
French-Algerian filmmaker Farida Khelfa (Instagram)
Highlights
Featuring interviews with a number of creative women from the region, Khelfa aims to use her platform to give a voice to these women who have spent their lives being misrepresented by mainstream media.

Titled “From The Other Side of the Veil,” the new film, which is debuting on Khelfa’s YouTube channel July 2, is also a celebration of Middle Eastern women.

“We can’t stop at the clothes, which obscures the view, the intelligence and the relevance. We have to listen to these women,” said Khelfa in a preview clip posted on her Instagram account.

“We are so close minded to listen to these women, simply because they aren’t dressed like us. Nevertheless, they are beautiful, they are smart, they are strong, they create things, they express themselves, they take risks and if that isn’t feminist, I don’t know what is.”

The film was inspired by a trip to Jeddah where the former model and filmmaker met female designers, artists, writers and actresses who completely defy the stereotypical views that some people hold about Arab women.

Featuring interviews with a number of creative women from the region, Khelfa aims to use her platform to give a voice to these women who have spent their lives being misrepresented by mainstream media.

“I was invited to Jeddah in Saudi Arabia and I met all these young women who were so talented, so articulate and well educated,” Khelfa said speaking to AnOther Magazine. “The way the western media portrays women in this region is so dated and inaccurate and I really wanted to do something about that.” 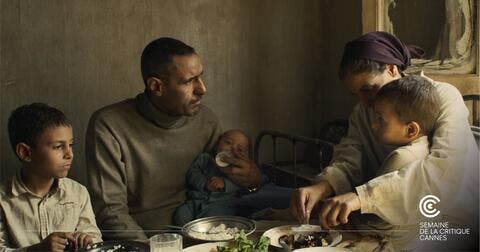 Khelfa is one of the first women of Arab descent to have a successful modeling career, paving the way for an entire generation of Arab and Muslim women in fashion.

She was born in Vénissieux, surrounded by eight siblings, and left home at the age of 16 to start a new life in Paris. Throughout her eclectic career as a model, activist, and filmmaker, she has worked with the likes of Jean Paul Gaultier, Azzedine Alaïa and Thierry Mugler, to name a few.