Published June 20th, 2021 - 04:04 GMT
Radar Rat and Girl with Umbrella (Twitter)
Highlights
Trademarks offer legal protection over a brand or product, giving the owner the rights to take legal action if someone uses the brand without permission.

Banksy has been stripped of two more trademarks for his works because he never intended to commercialise them when he applied for the legal protection, it has been revealed. 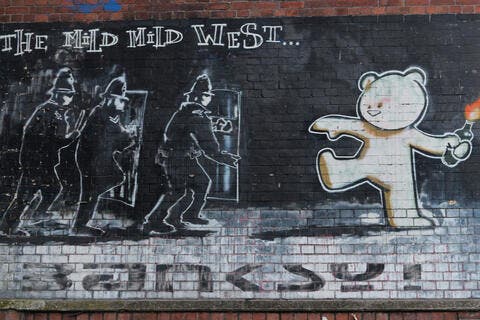 Banksy Set to Delight Saudis With Graffiti Exhibit in Riyadh

The latest rulings, which relate to Radar Rat and Girl with Umbrella, mean he has now lost four trademarks in total.

The anonymous street artist, who has previously said 'copyright is for losers', was told he was acting in 'bad faith' because he had 'departed from accepted principles of ethical behaviours or honest commercial and business practices'.

According to the Sunday Telegraph, the European Union Intellectual Property Office ruled that Banksy's anonymity 'hinders him from being able to protect this ... art under copyright laws without identifying himself'.

I really don’t know who made this #art 🎈#Banksy stripped of trademarks for 'Radar Rat' and 'Girl with Umbrella' https://t.co/NHPFB26S5f via @MailOnline

Radar Rat is considered one of Banksy's most iconic works and appeared on a wall in London in 2004 while Girl with Umbrella was created in 2008 in New Orleans.

The newspaper reports that Full Colour Black, a greeting card company that sells recreations of Banksy's work, convinced the EU panel to cancel the trademarks.

The company specialises in 'the commercialisation of street art' and uses Banksy's creations. It boasts on its website: 'We have Banksy images that you probably have never seen before.'

Trademarks offer legal protection over a brand or product, giving the owner the rights to take legal action if someone uses the brand without permission.

They also allow the to sell or license the brand to third parties if necessary.

In two separate judgements, the EU panel ruled that Banksy had filed for the trademarks in 'bad faith' because he had no intention of commercialising his images.

In his 2006 book, Wall and Piece, the Bristolian said copyright is 'for losers' and invited readers to download his works for 'amusement and activism' rather than profit, pledging never to commercialise his works.

But Banksy opened a shop last October where he sold his works, including 'Flower Thrower' - and said the shop was created 'for the sole purpose of fulfilling trademark categories'.

The panel said that this 'departed from accepted principles of ethical behaviours or honest commercial and business practices' when ruling in favour of Full Colour Black.

These latest decisions mean Banksy has now lost four trademarks on his work.

Last year, Banksy was stripped of his first trademark for his work the Flower Thrower after a two-year legal battle with Full Colour Black.

Judges pointed to the fact that 'he cannot be identified as the unquestionable owner of such works as his identity is hidden'.

Last month, he lost protection for his work Laugh now in a similar battle with the London-based card company.

Banksy was named by The Mail on Sunday as former public schoolboy Robin Gunningham, although his identity has not been confirmed.

The company which represents Banksy, Pest Control Office Ltd, was contacted for comment.

In a statement on their website which appears under 'Use of Images', the company says: 'You are welcome to use Banksy’s images for non-commercial, personal amusement.

'Print them out in a colour that matches your curtains, make a card for your gran, submit them as your own homework, whatever. 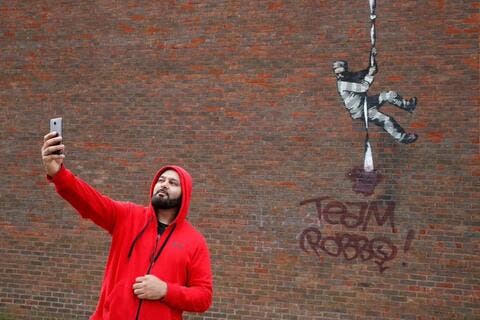 'But neither Banksy or Pest Control licence the artist’s images to third parties. Please do not use Banksy’s images for any commercial purpose, including launching a range of merchandise or tricking people into thinking something is made or endorsed by the artist when it isn’t.

'Saying “Banksy wrote copyright is for losers in his book” doesn’t give you free rein to misrepresent the artist and commit fraud. We checked.'