Published May 4th, 2021 - 04:49 GMT
(Shutterstock)
Highlights
“It is impossible to know how many potential terrorists have been deterred because of their wives and mothers.

Muslims see the measures as an attack on their right to practice religion. 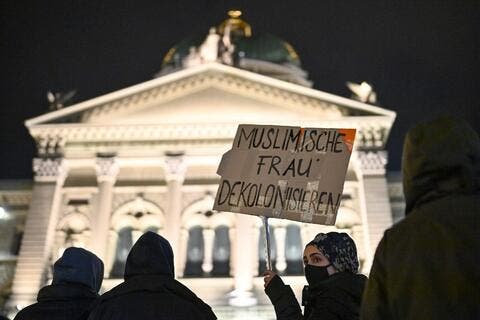 Last month Sri Lanka proposed that its parliament consider banning women from wearing face veils or burqas in public spaces, joining a growing list of countries that have adopted similar measures widely seen as anti-Islam and a source of concern for Muslim minorities.

Colombo ostensibly took the drastic step in the name of countering radicalisation and to strengthen its national security despite warnings from Muslim leaders.

Researchers who have studied the relationship between prohibitions on face coverings and extremism say that such official sanction becomes fodder for terrorist groups and leads to an increase in violent attacks by homegrown militants.

“For states to ban the wearing of the burqa means that they are violating the religious freedom and agency of these women. As many studies have demonstrated, restrictions on religious expression, like burqa bans, generate grievances and make the turn to the gun more likely,” Nilay Saiya, a senior fellow at the Religious Freedom Institute, tells TRT World.

Saiya is co-author of a study that investigated links between burqa bans and terrorism in Europe.

“Jarringly, we find that countries with veil restrictions experience almost 15 times more cases of Islamist terrorist attacks and 17 times more terrorism-related fatalities than countries not having these bans,” they wrote in the 2019 study.

Saiya, who is also an assistant professor of public policy and global affairs at Singapore’s Nanyang Technological University, says that religious attire is central to many religious traditions including Judaism, Sikhism besides Islam.

“Many women who wear face coverings see them as a way of demonstrating their submission to God and a constant reminder to hold fast to Islamic beliefs such as being honest and generous to those in need.”

Covering one’s head with a scarf is a common practise among  Muslim women in several countries but in some cultures burqas are also common, a garment that covers the face and body, when they go out.

Saiya says one of the biggest drawbacks of bans on face veils is the impact it has on Muslim women, who often hold the power to stop men in their households from joining militant groups.

“Women are often the first to notice behavioral changes and symptoms of radicalisation in their family members and are thus often the first line of defense against terrorism,” he says.

“It is impossible to know how many potential terrorists have been deterred because of their wives and mothers.”

In Europe, France was the first country to ban face veils in public places in 2011. In the following years Belgium, Bulgaria, Austria, Denmark and Netherlands followed suit, coming up with their own policies that impose some sort of restrictions.

European governments do not always specifically mention Islam and insist that prohibition is for everyone. But the statements made by some European leaders are nothing less than Islamophobic.

“You could carry a rocket launcher under your veil,” remarked Vaira Vike-Freiberga, the former president of Latvia.

British Prime Minister Boris Johnson compared Muslim women in veils to “letterboxes” and “bank robbers”. His comments led to a surge in anti-Muslim attacks in the UK, according to monitoring group Tell Mama.

Even burkinis, a Muslim alternate to bikinis, that cover the entire body and yet allow women to swim comfortably, has been referred to as a “symbol of Islamist extremism”.