Published June 10th, 2021 - 03:55 GMT
Tolerance by Diaa Allam (Instagram)
Highlights
“So this process of drawing with the pen on paper is almost like a respite, or a refuge, in this super-stimulating digital realm.” 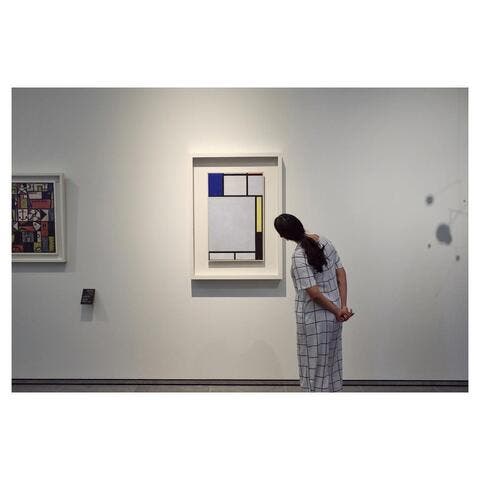 Called the Infl3ctor, it took the act of writing on paper and projected it onto the sides of buildings, creating ‘digital calligraffiti.’

Originally created for a project organized by the Berlin-based Public Art Lab, the Infl3ctor successfully merged calligraffiti and media art. “I was brought in to help solve this problem of how to come up with something where people can write calligraphy across buildings in real time,” says Ang, a Canadian artist and engineer best known for his light objects and interactive installations. “And we came up with this idea of creating a writing table, where whatever you write in black gets projected in white. So, as you make a stroke with a pen, or you splash the page with ink, it goes straight up onto the wall.”

Louvre Abu Dhabi’s first international exhibition of 2021, ‘Abstraction and Calligraphy – Towards a Universal Language,’ explores the dawn of modern abstraction and traces its origins to Asian and Arabic calligraphy.https://t.co/kCHxsWAuvD

The Infl3ctor has since travelled the world and was at the heart of a recent activation at Louvre Abu Dhabi, where visitors’ Eid messages were projected onto the walls of the museum and shared with family and friends. According to Alia Al-Shamsi, acting manager of cultural programming at Louvre Abu Dhabi, the event — presented as part of "Abstraction and Calligraphy − Towards a Universal Language,” which runs until June 12 — represented a “different way for people to experience the art form” and to “see how calligraffiti has evolved from traditional calligraphy.”

Perhaps more importantly, however, it revealed one of the many ways in which calligraphy has adapted to the modern age. Rather than remain caged by tradition, certain practitioners have sought to free calligraphy from the constraints of pen and paper. For Ang, that has meant using the Infl3ctor to create temporary spatial interventions that not only embody the beauty of calligraphy, but enable viewers to be present in the moment.

“Part of my practice is about using current technology in ways that connect us more with the present moment, with our surroundings and with each other,” says Ang, an assistant professor of interactive media at NYU Abu Dhabi. “So this process of drawing with the pen on paper is almost like a respite, or a refuge, in this super-stimulating digital realm.”

This focus on the present is of paramount importance for Ang. Although his artistic practice is tethered to the technological world, which tends to “dissociate us from ourselves and from our surroundings,” at the heart of his work is the desire to expand the possibilities of human expression and connection.

“When you’re writing characters by hand in a calligraphy style, you can’t help but create your own unique expression,” he says. “And there’s this very present idea in Chinese calligraphy that you can measure a person’s character through the expression of their calligraphy, because every part of your being gets expressed through the motion of writing. And I think that’s part of why people respond so strongly to the projected calligraphy.”

Sharing the stage with Ang at Louvre Abu Dhabi was the calligrapher, muralist and live-art performer Diaa Allam, who worked as an urban planner before becoming a full-time artist in 2017. Like Ang, he has developed his own style, using his own interpretation of Arabic letters and specializing in a calligraphic style that has a three-dimensional quality. “I think this comes from my experience as an urban planner,” explains Allam, who has been involved in live-art calligraphy for six years. “I was able to construct something that is different and has this architectural feeling.”

“When I first got into calligraphy I loved the feeling of Arabic letters,” he adds. “I loved how they were strong and flexible at the same time, and how you can manipulate them to make shapes, to make faces, to make animals, to make anything you want. The possibilities are limitless. And this is what I adapted when I started. I wanted to deliver the beauty of Arabic calligraphy to the world with my style.”

Interestingly, prior to the creation of the Infl3ctor, Ang had no previous experience of calligraphy. He had studied computer engineering at university in Canada before moving to the US and working for multiple startups in Silicon Valley, building software that was used by millions of people. “It was really amazing just to build things that were used by a lot of people,” he admits. “Building things that you really felt were on the edge of these big changes that were happening, in the sense of how important all of this software and networking was going to become for everyone.

“But after doing that I was, like, ‘OK, it’s fun building big things, but what else can we use the technology for? Can we use it for more human-centered applications? Can we use it in ways that don’t disconnect us from where we are right now, but actually connect us?’”

So he made the Inverse Parasol in 2005, which explored how light changes our perception of space and how we communicate with each other. It was to be the beginning of an artistic career that would utilize existing technology to create human-centered experiences.

“A lot of people say I have that kind of hacker’s aesthetic, in the old-school sense of trying to understand a technology so that you can repurpose it for something clever,” Ang says. “I mean, the Infl3ctor, it’s actually super-simple, right? We’re just taking what you write and projecting it. We’re making it bigger. But everything about it is really tuned to amplifying, or enhancing, human expression through the pen.”

It is this human expression that Allam is keen to explore further, both through abstraction and an examination of his own artistic struggle. “It’s not easy to be accepted in this field (calligraphy),” he says. “They like to stick to the rules — and that was a really hard struggle for me. In the first four years, everywhere I submitted my work I was rejected. So I took the decision to stop applying anywhere and to only work on improving myself and to only use social media to reach out to the audience. That was my decision for many years and it actually paid off.”

Now he is experimenting with the abstract. “It’s more about the movement of your hand,” he says. “Using the skills you have built up over a very long time to simplify the movement and to create shapes — not necessarily letters — gives you the feeling of uniqueness. There is uniqueness because you cannot repeat the shape exactly the same again.”