Published July 5th, 2021 - 07:38 GMT
Jeddah airport mural (Twitter)
Highlights
The mural is located in the airport’s arrival hall, where it can be viewed by both national and international travelers.

For more than a millennia, pilgrims from around the world have flocked to the holy city of Makkah to perform the sacred ritual of Hajj. 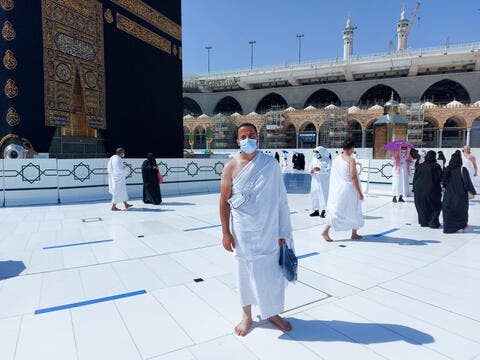 Hajj This Year! The Saudis Are Still Making up Their Mind

The pilgrimage has been depicted by artists throughout history, with the latest round of artwork being displayed at Saudi Arabia’s King Abdul Aziz International Airport (KAIA) in Jeddah.

The artwork, a mural spanning 36 meters, shows the journey of pilgrims throughout history, from land arrivals from the north that passed by AlUla, docking boats alongside the Red Sea’s port cities, to modern pilgrims arriving on planes at KAIA’s Hajj terminal with its large tent-like structures that can accommodate millions of people each year.

The mural, painted by Saudi artist Mohammed Al-Rabat, also showcases Jeddah’s old urban areas near the old port and old airports, some of the older Saudia aircraft fleet, the Grand Mosque’s features from various eras, along with images of civilization and prosperity captured within the Kingdom.
The mural is located in the airport’s arrival hall, where it can be viewed by both national and international travelers.
“I developed the idea after deciding to draw a mural at the new King Abdul Aziz International Airport when its construction started years ago. There were several ideas, but I chose to go with the Hajj journey and I worked on it for eight months inside my studio, where I represented the most significant stages of the Hajj journey, from the old Al-Bunt seaport to King Abdul Aziz Airport in Jeddah,” Al-Rabat told Arab News.

“In addition, I depicted the land Hajj journeys that were carried out by the caravans of pilgrims on the back of camels, which were drawn on the large canvas using acrylic colors along with stencil and silk screen printing techniques, among others,” he added.

“In various stages, I was able to infuse some of Jeddah’s old features and its unique architectural style, which was represented by some old Rowshan windows and the city’s gates, with some of the city’s modern features seen today. I then moved on to the transportation of pilgrims to the holy sites using old means of transport, then there was an old section of the Grand Mosque and a modern image representing the changes resulting from the new expansion.”
The artist told Arab News that the last stages of the project took time and effort to finalize. Transferring the work from canvas to colored glass spanning 3 meters in height and 36 meters in width was no easy feat, he said.

Regarding the work’s philosophy, Al-Rabat added: “The work’s importance is not in its value, rather its historical value and the accomplishment that represents what the artist has reached after years of research, experimentation and practice.”

It is not the first time that a mural depicting the remarkable religious gathering has been put on display. Since the advent of Islam, Hajj has been seen as a wonder to many Western artists, with many searching to understand its spiritual and visual significance.

Significant works include “Abu Zayd on Hajj and the Caravan of Pilgrimage,” painted in 1237, Louis-Nicolas de Lespinasse’s detailed overview painting of Makkah in 1787, as well an extremely rare print showing a pilgrim procession carrying the Kaaba’s kiswa en route from Cairo to Makkah, drawn by Sheikh Yunus in the 13th century. 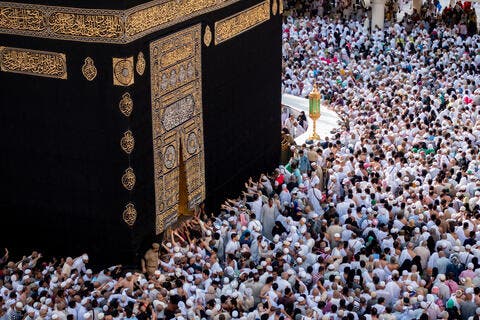 “Airports are among the essential facilities in all countries of the world. Their role is not limited to travelers arriving to the country or leaving it. Their role includes conveying an image that reflects the country’s culture,” said Al-Rabat.

Inspired by works of art showcased at Riyadh’s King Khalid International Airport 36 years ago, the artist said that he was inspired to come up with a concept that would fit his home city’s airport.
“These artworks were painted on different materials and spaces and showcased all the forms of life found in the Kingdom. The artworks came in addition to some traveling exhibitions that were organized at the airport. This is part of an integrated building that embodies a civilization and conveys an image of that country upon the visitor’s arrival, whether through the architectural style of these airports or through the internal facilities and various artworks they contain,” Al-Rabat added.
The journey, one that is close to the hearts of all Muslims, has and will always be a fascinating topic for artists to depict and document. From paintings, sketches and illustrations, to poetry, literature and photography, the descriptive works describing the inner spiritual journey and physical challenges can be depicted through several mediums, a window through which outsiders can observe Hajj.