Published April 5th, 2021 - 09:42 GMT
Donald Trump shares a tender moment at Mar-a-Lago on Easter Sunday with one of his grandchildren
Highlights
Former president and his wife attend Easter Sunday service.

Former President Donald Trump and First Lady Melania were given a rousing round of applause as they attended Easter Sunday service in Florida today.

The couple stood in the front row of the Christ Fellowship Church in Palm Beach Gardens for its morning service.

A member of the congregation filmed as Senior Pastor Todd Mullins led the packed chapel in prayer. 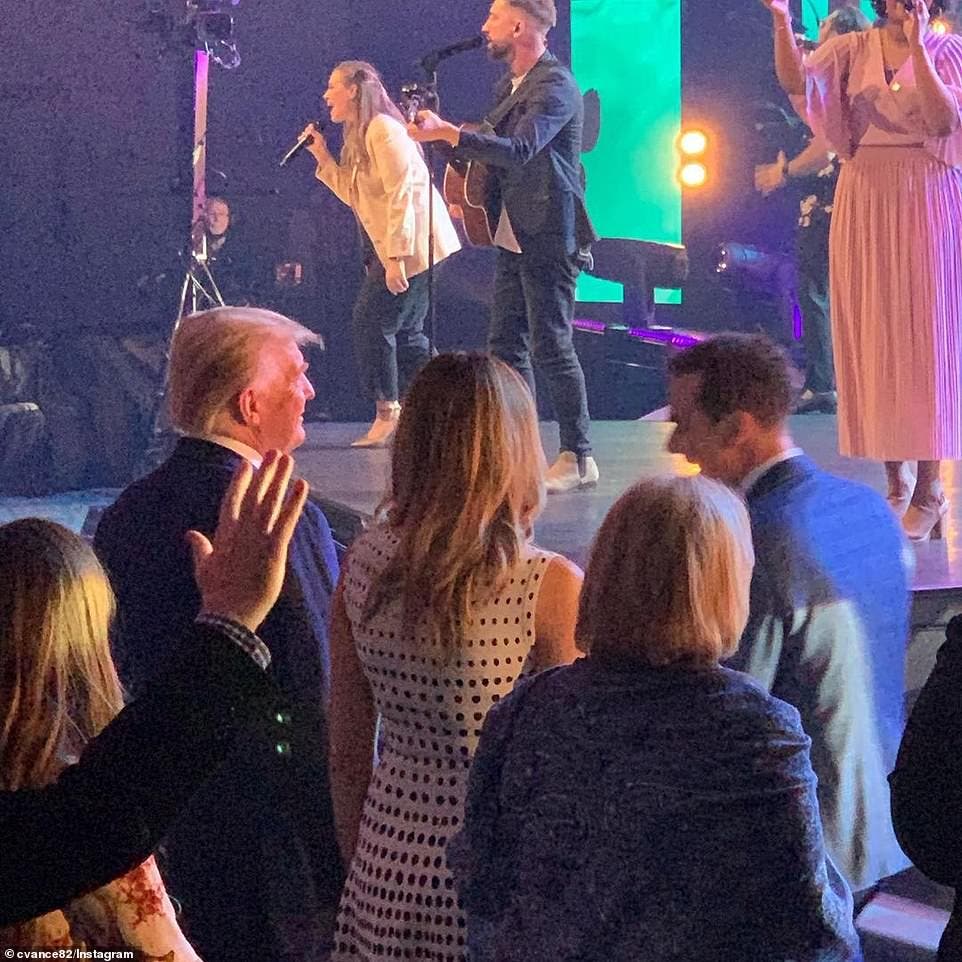 Mullins then introduced the former president, saying: 'It's also our privilege, my privilege today to welcome the President (and) Mrs Trump too.'

The Trumps turned to acknowledge the cheers of the crowd, and Melania raised a hand to wave.

Afterwards the couple chatted to Mullins as the Easter service continued with a performance from a live band.

'We always welcome everyone to join us at Christ Fellowship in celebrating the resurrection of Jesus,' Mullins said afterwards.

'This year, perhaps more than ever, we hope that Jesus' message of hope and salvation spreads widely and brings joy to all who hear it.'

Stunned onlookers seemed delighted to see the former First Couple at the 22,500-square-foot worship center, which has seating for about 1,500 people.

In the photographs and video posted online, none of the attendees wore masks, and the Trumps seemed to mingle freely with other worshippers in the large crowd.

Today, Christ Fellowship Church is one of the 25 largest churches in America with as many as 30,000 weekly attendees at locations across Florida.

Tom Mullins was also part of the Trump campaign's Evangelical Executive Advisory Board.

After the service, the Trump's motorcade returned to Mar-a-Lago where Trump spent some quality time with the grandchildren.

The grandchildren went on an Easter egg hunt around the stately gardens at Mar-a-Lago with dozens of other kids.

'I'm not sure they're working all that hard for it but it's a good tradition nonetheless and they had fun,' said Donald Trump Jr, who posted a video of the kids scrambling for treats.

'Easter with grandpa. Hope you all had a great one,' Don Jr wrote on Instagram beside the photos.

Trump delivered an Easter message earlier Sunday in which he took aim at his political enemies.

'Happy Easter to ALL, including the Radical Left CRAZIES who rigged our Presidential Election, and want to destroy our country!' Trump wrote in the statement, which was released by his Save America PAC.

Their new home is just 20 minutes from Mar-a-Lago.

Earlier, Eric and Lara Trump were seen after attending an Easter service on Sunday before packing up their belongings and leaving Mar-a-Lago.

Lara wore a white dress as she was spotted holding her one-year-old daughter, Carolina, while heading off to change into comfortable clothes.

Carolina and her three-year-old brother, Eric Jr, both wore white as they held onto their colorful Easter baskets.

A short time later, Lara and her children reemerged in comfortable clothing, with Lara sporting jeans and a white shirt. She was seen helping Eric packed down a vehicle with multiple suitcases as they prepared to leave Mar-a-Lago.

Eric and Lara have been based in New York City for years, and are still understood to live there with their children.

Lara and Eric were seen Sunday just two days after former president Donald Trump was spotted at Mar-a-Lago with former first lady Melania and their son Barron, making it the family's first appearance together since he left office.

Video posted to Instagram on Friday shows the Trump family strolling through an outdoor dining area at the club in Palm Beach, Florida, where Trump has made his home after leaving the Oval Office.

'Mr President!' one supporter is heard shouting, as the club members cheer and applaud, some rising to their feet.

Barron, 15, was noticeably absent from Trump's farewell address on his final day in office, and Melania has been vocal in her protection of the young teen from public scrutiny.

While Trump has frequently been spotted golfing since leaving office, including on Saturday, Barron has not been in the public eye for several months.

In December, Melania reportedly toured private prep schools in Florida, seeking the right fit for Barron to continue his education.