Facebook is refusing to remove an advert from its social media platform which claims Congresswoman Ilhan Omar has links to Hamas. 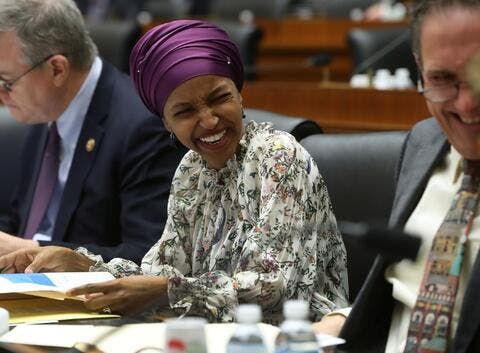 In Defence of Congresswoman Ilhan Omar

Omar's office reached out to the company to inform them the message was incorrect, with fears if could incite people to make death threats towards the lawmaker.

The advert was made by a pro-Israeli lobbyist group, the American Israel Public Affairs Committee.

In one ad, Omar's face can be seen  superimposed onto a scene of Hamas firing rockets towards Israel. The accompanying text reads: 'When Israel targets Hamas, Rep. Omar calls it an act of terrorism.'

The ad is a twist on a tweet made by the congresswoman in which she said that Israeli airstrikes that kill civilians in Gaza was an act of terrorism.

However, Omar did not say that Israeli airstrikes that target Hamas were terrorist acts.

'Israeli air strikes killing civilians in Gaza is an act of terrorism. Palestinians deserve protection,' she wrote. 'Unlike Israel, missile defense programs, such as Iron Dome, don't exist to protect Palestinian civilians. It's unconscionable to not condemn these attacks on the week of Eid.'

Israel has said it takes precautions to narrowly target Hamas and other militant targets in Gaza, but many civilians have been reported killed there by Israeli airstrikes, including dozens of children. Israel and Hamas on Thursday agreed to a cease-fire.

Omar's aides warned Facebook that previous images that tried to link her to Hamas resulted in her receiving death threats.

Aides told the company the ad 'peddles both hate speech and misinformation.'

'Given the number of threats of death and violence the Congresswoman receives on a near-daily basis, it's not just irresponsible - its incitement. Facebook should immediately remove these ads which blatantly peddle both anti-Muslim hate speech and disinformation, and AIPAC should apologize,' Omar's deputy communications director, Isi Baehr-Breen, said in a statement.

Facebook won’t take down an ad that Rep. Ilhan Omar’s office says could lead to harassment and death threats https://t.co/VwPxreW8ir

The ad was widely seen, racking up an estimated 500,000 to 1 million views, and was part of a series condemning other lawmakers who opposed Israel's airstrikes, including Senator Bernie Sanders.

Spokesman for Facebook, Andy Stone, told the Washington Post the company reviewed the ads and deemed them acceptable under its policies.

Ms Omar's office told Facebook it was 'deeply concerned that Facebook would continue to profit off this hate' in an email exchange with the company.

Democratic lawmakers have claimed frequently that Facebook does a poor job of removing false and misleading information from their site.

Speaker of the House, Democrat Senator Nancy Pelosi criticized the platform over its decision.

'I don't agree with Congresswoman Omar's comments, but it's very disappointing to see deeply cynical and inflammatory ads twisting her words,' Pelosi said.

Palestinians are being attacked in their holy site during Friday prayers. This level of indignity, injustice and cruelty is unacceptable.

Israel’s military functions with impunity because the world let’s it. This has to change. https://t.co/4KxkPifMp2

AIPAC has defended the ad as 'fair and accurate' in a statement. 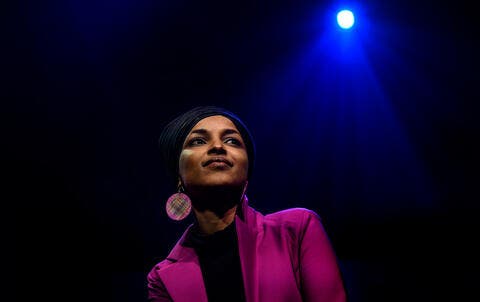 Ilhan Omar Says She Loves The USA More Than Donald Trump Does!

'It is not a personal attack but highlights her outrageous characterization of Israel's efforts at self defense as 'terrorism.' Israel targets Hamas terrorists, not civilians.'