Published June 1st, 2021 - 08:41 GMT
Louise Fischer (Instagram)
Highlights
While Louise admitted that 'maybe' she would be up for it again, adding that it was a 'great experience,' she revealed it 'wasn't the best sex' of her life.

A Danish journalist who conducted an interview while having sex at a swingers club for a radio feature which included clips of her moaning has told how her mum thought it was 'funny' while her dad found it 'really cool.' 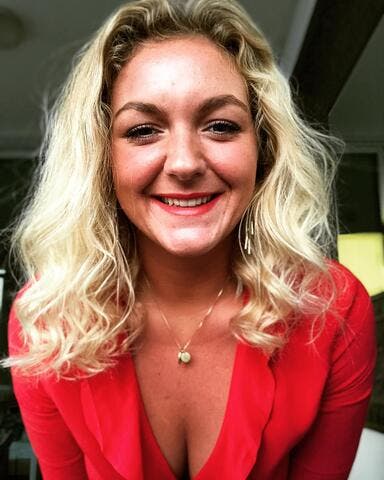 Danish Journalist Records Herself Having Sex While Conducting Interview!

Louise Fischer, from Denmark, who has since revealed it wasn't the 'best sex of her life,' visited Swingland in Ishøj, near Copenhagen, earlier this year as part of a report to cover the sex club reopening after Covid-19 restrictions eased in the country.

In the segment, which aired during a Radio 4 morning show in the country in March and has since been shared on Twitter, the journalist, 26, can be heard moaning as she interviews a male club participant while the pair have sex.

Speaking to Bild about the reactions she's received since the raunchy report went viral, Louise said: 'Most of them were very positive, they thought it was brave and cool. Others think that I've crossed a line in journalism.'

'I don't have a boyfriend, that definitely made it a lot easier. My mother just thinks it's funny and laughs, my father thought it was really cool.'

Louise, who has recently confirmed the moaning you hear in the first sex scene is her, explained that while she spent several hours with the guests in the swinger club, the report lasted only minutes.

She joined the guests as they sat and talked together over a glass of wine at the bar, before moving to a large bed.

The journalist went on to say she would have 'simply said no' if she had been approached by a guy was a unsympathetic towards her.

'I find that the people in the swingers' club are much more polite to each other than you are used to in normal bars or clubs, for example,' she said. 'In the swingers club you don't have to explain anything or excuse anything, a simple no is enough.'

While Louise admitted that 'maybe' she would be up for it again, adding that it was a 'great experience,' she revealed it 'wasn't the best sex' of her life.

'Yes, I enjoyed it,' she explained. 'Even though it wasn't the best sex of my life. But the men in this club are very polite and very considerate. I felt like a goddess. They make you feel very special. "

But while Louise's program director Tina Kragelund commended the journalist for 'experimenting' with 'doing journalism differently,' others have criticised her for taking the job too far.

Despite this, Louise would consider doing another report with video - including sound and image - if it meant that she wasn't involved, adding that would 'exceed' her 'personal limits.'

According to the publication, during the feature, Louise asked: 'What are you seeing right now?' before a man responded that he was looking at a gorgeous woman who had not tried being in a swinger club before.

She went on to explain how she was invited up into a big bed in the middle of a room, before they started touching her body.

She said she hadn't planned to have sex during the interview, but added: 'For me, it's very natural. It is part of my job to give an insight into a world that not everyone has access to.'

She said it 'loosened up the guests' who were initially 'reluctant' to take  part in the interviews and appeared nervous about her microphones.

A Danish journalist has recorded herself conducting an interview while having sex for a feature at a swingers club and caused a sensation with her raunchy report.

During the 2 minute long segment, the reporter can be heard asking questions to her interviewees while others pant in the background.

Later, she can be heard asking a male guest about his experiences at the club while they have sex and she moans loudly.

Meanwhile the reporter also said she wasn't pressured into having sex by her employers at the radio station.

The story was first approved as a visit to a swinger club, before the finished product was approved by today's editor on the morning show.

The recording of her romp was initially aired during a morning show in Copenhagen before it was shared on social media.

When the clip was shared online, the broadcaster posted: 'Radio4 was present when the swinger clubs had to reopen.

'Warning: It got hot and wet for both our reporter and the guests.'

Many social media users were stunned by the clip, with one posting: 'It was just an excuse for a bang. It was completely unnecessary.'

Another wrote: 'Things only women can do hehe. Had a man had sex on the radio, he would probably have had the whole country against him.'

But Louise said she had had a wave of support after the interview aired, telling the Copenhagen post: 'People have written things to me like 'great respect', 'brave' and 'good journalism' on Instagram and Facebook.'