Gaza's Poultry, Livestock Faces a Catastrophe Thanks to Israel!

Published May 24th, 2021 - 01:25 GMT
Real White Farming Poultry Chicken (Shutterstock)
Highlights
Twelve Israelis were also killed in Palestinian rocket fire from the Gaza Strip. The fighting, the fiercest in years, came to a halt on Friday under an Egyptian-brokered cease-fire.

The Palestinian Ministry of Agriculture on Monday warned of a “catastrophe” in the Gaza Strip due to shortage of animal feed as a result of the Israeli blockade on the territory. 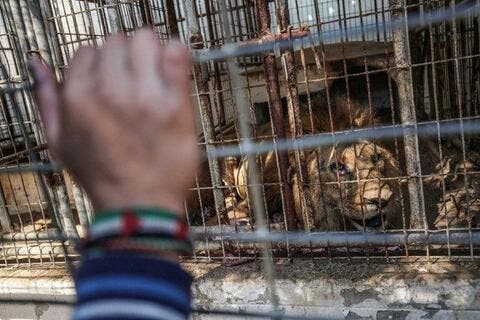 Who is The Big Bad Wolf in the Gaza Zoo? The Israelis Maybe

"A major disaster will hit the animal production sector in Gaza due to the lack of fodder needed to feed the animals," the ministry said in a statement.

It said that the shortage of feed has caused the death of thousands of poultry and livestock in the Palestinian territory.

Animal fodder has been unable to cross into #Gaza since the Kerem Shalom commercial crossing was closed on 10 May. https://t.co/HooCMaU7So

"This was caused by Israel’s refusal to allow fodder through the Kerem Shalom commercial crossing since the launch of its military aggression on May 10,” the ministry said, going on to call for piling pressure on Israel to allow the entry of fodder and grains into the blockaded enclave.

Tension escalated across the Palestinian territories since last month over an Israeli court verdict to evict Palestinian families from their homes in the Sheikh Jarrah neighborhood in Jerusalem in favor of settlement groups. The situation flared up after Israeli forces raided the Al-Aqsa Mosque and assaulted worshippers inside.

The tension spread to the Gaza Strip, with Israel launching airstrikes that killed at least 248 Palestinians, including 66 children and 39 women, and injured more than 1,900 others. Health authorities in the West Bank confirmed that 31 were also killed in the occupied territory, totaling 279 across all Palestinian territories.

An ambulance officer treats a dog that has been wounded as a result of iof bombings in east Gaza. Gazan medics tend to everyone, even animals https://t.co/w7eiXepCvT

Twelve Israelis were also killed in Palestinian rocket fire from the Gaza Strip. The fighting, the fiercest in years, came to a halt on Friday under an Egyptian-brokered cease-fire.