Guess Why Kamala Harris is Under Fire?

Kamala Harris has come under fire for handing out cookies with her likeness during her first foreign tour of Central American countries ravaged by the border crisis. 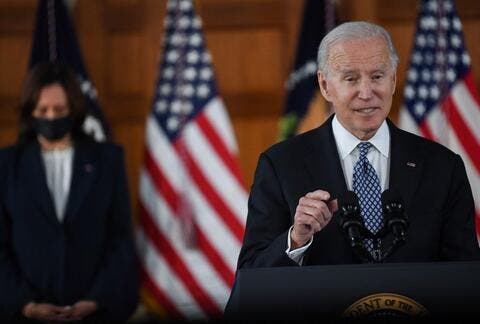 The vice president gifted the treats - which featured a bust of her drawn in frosting without the details of her face - to reporters aboard Air Force 2 on Sunday as she set off for Guatemala.

USA Today reporter Courtney Subramanian shared a photo of one of the cookies on Twitter - sparking an onslaught of criticism from conservatives.

Commentator Matt Walsh chimed in: '"Here you go, everyone. I thought you might like to eat my face." What a weirdo. Extremely disturbing behavior.'

Another set of cookies is reported to have featured Air Force 2, according to a tweet posted Sunday night by Subramanian.

Many critics wondered why the vice president would give out cookies of her own likeness while she faces backlash for avoiding the US-Mexico border, a visit she said would be akin to nothing but a 'grand gesture.'

With the Republicans even a damn cookie is political. They are so sad.https://t.co/1O54o6VMuo

The former presidential hopeful visited Guatemala on Monday to try to address the 'root causes' of illegal immigration.

'Handing out cookies with her face on them as the border crisis rages… The modern-day equivalent of "let them eat cake,"' said GOP Chairwoman Ronna McDaniel.

The vice president drew even more comparisons to a certain French monarch.

The cookies were baked by black-owned Washington, DC, bakery CakeWichCraft, according to Mediaite reporter Tommy Christopher.

The shop did not respond to calls or emails from DailyMail.com

Some found the hullabaloo much ado about nothing.

'Kamala was given cookies that look like her by a Black owned business. Kamala then handed them out to the press. The press is now saying that was a gross thing to do. Tell me, was she just supposed to eat them all herself,' one user asked.

'They have nothing else to criticize. So petty & childish,' wrote a Twitter user by the name Carol Fiorello.

The modern-day equivalent of “let them eat cake.”https://t.co/iInoYGXXp7

Customs and Border Patrol number show a record-high of 178,622 encounters with illegal border crossers in April alone, creeping up from massive spike in February and March.

In a press conference with Guatemalan President Alejandro Giammattei on Monday, Harris delivered a stern message.

'I want to be clear to folks in the region who are thinking about making that dangerous trek to the United States-Mexico border: Do not come. Do not come,' she said. 'I believe if you come to our border, you will be turned back.'

That same day, the Supreme Court upheld a lower court ruling that barred certain illegal immigrants from applying for permanent residency, also known as a green card, because of their unlawful entry.

Ronna is furious that @VP was handing out cookies and not to @GOPChairwoman pic.twitter.com/SGnK5VKnXD

The case is expected to affect as many as 400,000 people, many of whom have lived in the US for years.

Still, Harris said she would not be visiting the US-Mexico border.

'I came here to be here on the ground, to speak with the leader of this nation around what we can do in a way that is significant, is tangible and has real results,' Harris said.

'And I will continue to be focused on that kind of work as opposed to grand gestures.' 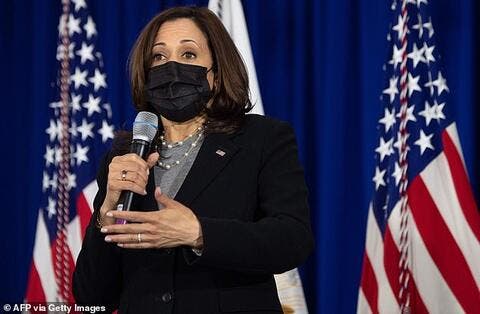 Meanwhile, border enforcement groups are overwhelmed and facilities have reached near 2,000 percent capacity at some points.