Heba Y. Amin - When I See the Future, I Close My Eyes- Solo Exhibit at the Mosaic Rooms in London

Throughout the exhibition, Amin conveys the ways in which the apparently regional politics of the Middle East, as evidenced in these projects, relate to broader global concerns about surveillance, dictatorships, and the emergence of digital authoritarianism. Drawing on a true tale of how Egyptian authorities detained a migratory stork in 2013 and accused it of espionage, The General’s Stork investigates the politics of aerial surveillance - against the backdrop of biblical prophecies, drone warfare, and colonial narratives - from a bird’s-eye view.

The work utilises film, performance, and archival research material to explore the extent to which Western military techniques of reconnaissance have determined the topographical quartering of the Middle East and how paranoia can become so prevalent that a bird can be accused of spying. In another extensive work, the artist references the staged elements of dictatorial modes of public address.

Throughout Operation Sunken Sea, Amin reveals the historical contexts behind colonial megalomaniacal geo-engineering proposals to drain the Mediterranean Sea and, simultaneously, writes herself into this historical lineage by performatively adopting the persona of a quasi-dictator. Re-purposing the original proposals, Amin broadcasts a speech, recorded live in Malta in 2018, in which she pitches a contemporary ‘solution’ to the so called migration crisis by relocating the sea within the African continent.

Amin’s ongoing multi-channel video installation Project Speak2Tweet utilizes voice messages recorded by phone in response to the Egyptian government’s countrywide Internet shutdown during the first days of the 2011 uprising. Juxtaposed with the abandoned urban structures that represent the long-lasting effects of corruption, the work highlights the extent to which advances in communication technologies are often disguised by their utopian promises of democratic expression.

The exhibition borrows its title from the song Excellent Birds, co-written by Laurie Anderson and Peter Gabriel for video artist Nam June Paik’s 1984 worldwide broadcast Good Morning, Mr. Orwell. Reflecting upon the history of digital media, the use of this title further alerts us to one of Amin’s central interests: the post-digital future of surveillance technologies and emerging forms of digital authoritarianism. In this context, the exhibition is intended as a working tool for producing further original research on these topics, which will in turn modify the works on display.

The ensuing research generated by this project will be published online as the work evolves over the duration of the exhibition. When I see the future will showcase an extensive program of events and performances through to March 2021, foregrounding the interdisciplinary methods and performative investigations that provide the impetus for the artist’s practice.

Amin and Downey will also launch their new book, Heba Y. Amin: The General’s Stork (Sternberg Press, 2020), as part of the opening program.

Anthony Downey is Professor of Visual Culture in the Middle East and North Africa (Birmingham City University). He is the Cultural Lead on a four-year Arts and Humanities Research (AHRC; 2020-2024) funded project that focuses on artistic practices, education, and digital methodologies in Lebanon, Palestine and Jordan. He sits on the editorial boards of the peer-reviewed journals Third Text and Digital War, respectively, and is the series editor for Research/Practice (Sternberg Press, 2019–ongoing), which includes the volume Heba Y. Amin: The General’s Stork (2020). Upcoming and recent publications include Unbearable States: Digital Media, Cultural Activism and Human Rights (forthcoming, 2021); Critique in Practice (Sternberg Press, 2020); Future Imperfect: Contemporary Art Practices and Cultural Institutions in the Middle East (Sternberg Press, 2016); and Art and Politics Now (Thames and Hudson, 2014). 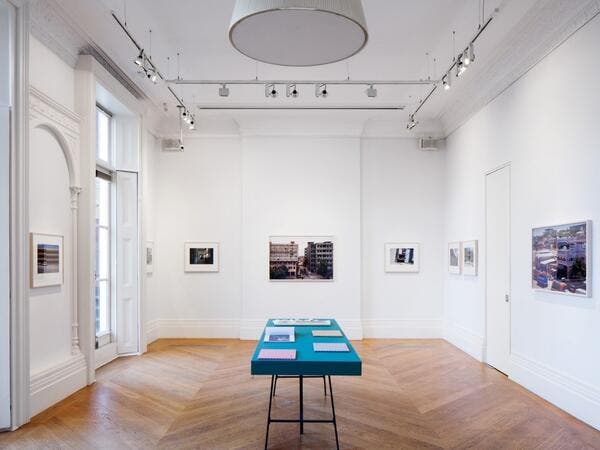 The Mosaic Rooms are a non-profit art gallery and bookshop dedicated to supporting and promoting contemporary culture from the Arab world and beyond in London; through free contemporary art exhibitions, multidisciplinary events including film screenings, current affairs talks and book launches, and learning and engagement program.

"We work in partnership with local, national and international organizations to disseminate our combined arts program to the widest possible audience – in London and beyond. Our previous collaborations include partnerships with The British Museum, ICA, Shubbak Festival, London Design Festival and London Festival of Architecture, amongst many others."

They believe in the importance of creating a cultural space that presents new thinking and daring creativity, illuminates ideas, inspires understanding, and interrogates contemporary issues with a vision for a London audience with a more informed, engaged and critical understanding of Arab culture and society.