The face of King Tutankhamun's father has been seen some 12,000 years after death.

Scientists used a skull discovered in the Valley of the Kings nearly 100 years ago to piece together the look of Pharaoh Akhenaten who ruled from 1353BC to 1335 BC.

The digital image shows a man in his early 20s with a long jaw and piercing eyes, along with a skull shape and a pointy nose that looks similar to that of King Tut.

Akhenaten married one of his sisters who gave birth to their son, but as a result of the incestuous relationship, Tutankhamen was born with numerous health issues that experts believe led to an early death. 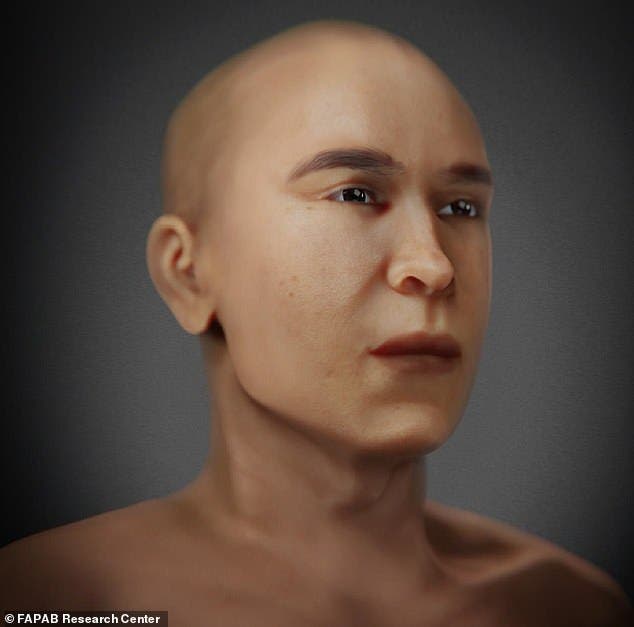 The digital image of the Akhenaten was created by the Forensic Anthropology, Paleopathology, Bioarchaeology Research Center (FAPAB) in Sicily, which used a skull from a mummy discovered in 1907.

The remains, known as KV 55, were found in a tomb just a few feet away where Tutankhamen was laid to rest, which led researchers at the time to believe it was the famous Pharaoh’s father.

Thanks to modern technology, a DNA analysis was performed about a century after KV 55 was found that suggested it was Tut’s biological father.

However, some of the genetic results were criticized by palaeomolecular experts in 2010.

The facial reconstruction took months to complete, but unlike previous images of KV 55 the team did not include hair, jewelry or other adornments to only ‘focus on the facial traits of this individual,’ reads a Facebook post sharing the announcement.

Scientists used a process called the Manchester method for this project, which considers both soft tissue thickness and facial muscles when reconstructing a face.

The shape and size of various muscles are determined on the basis of the underlying hard tissues.

Francesco Galassi, director and co-founder of the FAPAB Research Center, told Live Science: ‘facial muscles and ligaments are modeled on the skull model according to the rules of anatomy.

‘The skin is placed on top of this, and the tissue thicknesses are average values that have been scientifically determined.’

The team also pulled a ‘massive amount of data’ about the mysterious mummy such as earlier physical examinations of the skull, measurements and X-rays, Galassi said.

‘This facial reconstruction brings back to life, in a metaphorical way, one of the most controversial and important mummies in the history of the world, potentially attributable to Akhenaton himself, although further confirmation of this identification could be wanted,’ the team shared in the study published on Academia.

Not only is the mummy said to be controversial, Akhenaten himself was surrounded by controversy when he ruled Egypt.

When Akhenaten came into power he abandoned Egypt’s traditional of worshiping many deities to monotheism and only pay homage to a sun disc called Aten.

The shift was not widely accepted in ancient Egypt, as their entire culture was focused around many gods.

When Akhenaten died, the people dismantled and hid monuments of the late Pharaoh and his name was erased from the list of rulers.

However, the previous polytheistic religion was reestablished once Akhenaten’s son, Tutankhamen took over the throne.

Tut began his reign at the age of eight or nine and ruled for about nine years.

However, the young king was plagued with health issues due to his parent’s being brother and sister.

And a reconstruction of his face and body showed the world a glimpse of what ailments he may have endured.

King Tut had buck teeth, a club foot and girlish hips, according to the most detailed examination ever of the ancient Egyptian pharaoh’s remains.

And rather than being a boy king with a love of chariot racing, Tut relied on walking sticks to get around during his rule in the 14th century BC, researchers said.

A ‘virtual autopsy’, composed of more than 2,000 computer scans, was carried out in tandem with a genetic analysis of Tutankhamun’s family, which supports evidence that his parents were brother and sister.

The scientists believe that this left him with physical impairments triggered by hormonal imbalances. And his family history could also have led to his premature death in his late teens.

Various myths suggest he was murdered or was involved in a chariot crash after fractures were found in his skull and other parts of his skeleton.

Now scientists believe he may have died of an inherited illness because only one of the breaks occurred before he died, while his club foot would have made chariot racing impossible.

Hutan Ashrafian, a lecturer in surgery at Imperial College London, said that several members of the family appeared to have suffered from ailments which can be explained by hormonal imbalances. He said: ‘A lot of his family predecessors lived to a ripe old age. Only his immediate line were dying early, and they were dying earlier each generation.’

Egyptian radiologist Ashraf Selim: ‘The virtual autopsy shows the toes are divergent – in layman’s terms it’s club foot. He would have been heavily limping.

‘There is only one site where we can say a fracture happened before he died and that is the knee.’

Evidence of King Tut’s physical limitations were also backed up by 130 used walking canes found in his tomb.

Researchers speculate that Tutankhamun broke his leg and died from the infection that followed shortly after.

In 1907, Lord Carnarvon George Herbert asked English archaeologist and Egyptologist Howard Carter to supervise excavations in the Valley of the Kings.

They opened the burial chamber and discovered the the sarcophagus in February the following year.

The tomb is one of the most lavish to be discovered in history, filled with precious objects to aid the young Pharaoh on his voyage to the afterlife.

The small size of Tutankhamun's burial chamber, given his standing in the Egyptian history, has baffled experts for years.

Tutankhamun's burial chamber is the same size as an antechamber, rather than a tomb fit for an Egyptian King, for example.