Published July 1st, 2021 - 06:00 GMT
Istanbul Cinema Museum (Twitter)
Highlights
The film camera that captured the founder of modern Turkey Ataturk’s speech for the Republic’s 10th anniversary is also there, which later on was used by filmmaker Tonguc Yasar as an animation desk.

Centrally located in Beyoglu, the Istanbul Cinema Museum beckons visitors from Turkey and beyond to experience the history of cinema in the country. 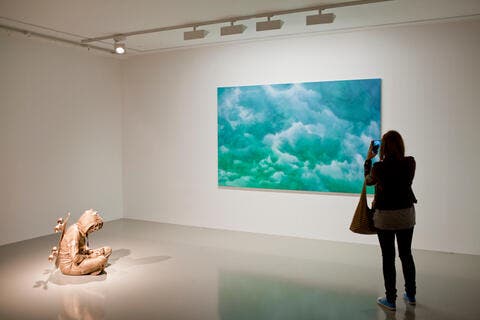 The Istanbul Cinema Museum, located in Atlas Pasaji, an arcade dating back to the 19th century, is off the famed Istiklal Street in Istanbul. The building was constructed after the Beyoglu fire, in 1870, by businessman Agop Koceyan during the reign of Sultan Abdulaziz. Koceyan donated the building to Taksim Vosgeperan Armenian Church, which was transferred to Aziz and Ahmet Borovali in the 1940s.

In 1948, the biggest multipurpose theatre of the time, the Atlas Cinema was built in the garden behind the building. In the 1970s, Cevher Ozden bought the building which remained unused for a time, and was transferred to the Treasury in 1985, and was allocated to the Ministry of Culture and Tourism in 1992.

The building was restored to its former glory in 2019-2020; the Atlas Cinema was refurbished and reopened as Atlas Cinema 1948 and the Istanbul Cinema Museum was established, opening to the public in March 2021. The ceiling ornamentation is especially beautiful and visitors are advised to remember to look up.

The first floor of the Istanbul Cinema Museum is dedicated to digital applications, among them a memory pool. Museum Director Ilknur Ulu says this is the first time a memory pool was used in a cinema museum setting. Visitors can drag and drop film icons to see the details of the film and a brief synopsis.

The museum also boasts wax figures of legendary actors Adile Nasit as ‘Hafize Ana’ and Kemal Sunal as ‘Tosun Pasha’. A tri-panel film screen shows famous scenes from Turkish films in a thematic manner with directional loudspeakers that provide the sound as you stand under them.

There is also a green screen with which visitors can insert themselves into a film of their selection, and email themselves a memento of their journey. Ulu says this feature is very popular with guests, as is the telephone room, where visitors pick up the phone to view scenes from Turkish films, subtitled in English, and hear the dialogue. A click of the button refreshes the screen so that they can see as many selections from different films as they like.

The museum continues upstairs in the second and third floors of the building. On the second floor, there are costumes worn by famous actors such as Hulya Kocyigit in Gokce Cicek, Sadri Alisik in Ah Guzel Istanbul, and Turkan Soray in Dila Hanim.