Published June 18th, 2021 - 09:21 GMT
(Shutterstock/ File Photo)
Highlights
It bounded across busy roads before clawing at the gates of a barracks

A brown bear was shot dead today after injuring four people while rampaging through a Japanese city and attacking soldiers at a barracks. 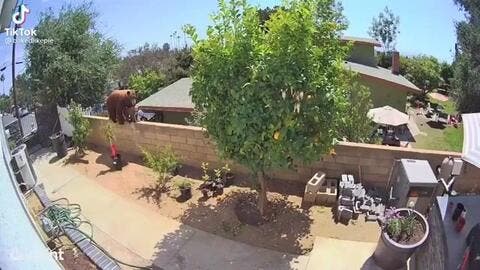 California Teen Fights Wild Bear to Save Her Dogs

Dramatic footage showed the bear bounding down busy streets in Sapporo before it darted across a main road and started clawing at the gates of the barracks where it knocked a soldier to the ground as other troops fled in terror.

Schools were shut and flights were cancelled at the regional airport as a team of hunters were deployed alongside police to track the animal down.

City officials later tweeted that the beast had been 'exterminated' - shot by the hunters.

One soldier was injured in the bear's rampage in the city, which will host the Olympic marathon and race-walking events in August.

Another victim was mauled by the bear after it attacked him from behind, TV footage showed. The person was taken away on a stretcher.

Earlier, government spokesman Katsunobu Kato told people in the Hokkaido region to be on alert.

'A total of four people, including one Self-Defense Forces member, have been attacked and injured by the brown bear. We express our sincere sympathy to them,' he said.

'Officials from Sapporo City, the Hokkaido police, a local hunting association and other concerned agencies have arrived at the scene. They are coordinating efforts to capture the brown bear, or if deemed necessary, exterminate it.'

A brown bear was shot dead in northern Japan after tearing through a residential area on Friday and injuring four people, according to a Japanese public broadcaster https://t.co/Hb8Yg0LAZZ

One of the victims was in their 40s, one in their 70s and another in their 80s, according to NHK, which did not give details of the fourth.