Published June 30th, 2021 - 08:00 GMT
First Lady Dr. Jill Biden gets the cover of Vogue (Twitter)
Highlights
Jonathan Van Meter, who wrote the piece and has previously profiled Biden, traveled with the First Lady on several trips and then joined both Bidens on another.

Jill Biden has only been First Lady for a matter of months but she has already achieved a coveted honor that her predecessor Melania Trump was never afforded: a glamorous Vogue cover shoot, complete with a lengthy profile praising her as 'a goddess' and 'a joy multiplier'. 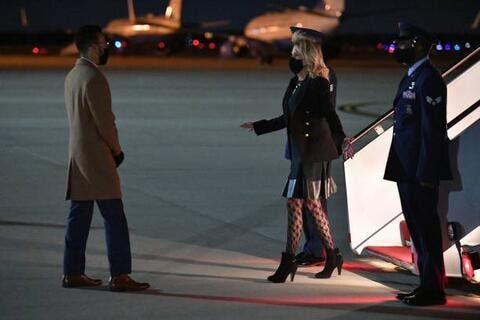 In Style: Can Jill Biden Wear What She Wants?

The 70-year-old receives the all-star treatment in the August issue of the fashion publication, which features a gushing 6,000-word profile about her, as well as several dazzling photos taken at the White House by famed photographer Annie Leibovitz, who also snapped former First Ladies Michelle Obama and Hillary Clinton when they posed for their own covers of the magazine.

Jill put on a fashionable display for her shoot, modeling a $2,690 navy blue flowered Oscar de la Renta gown for the cover photo, which appears to have been taken on the Truman Balcony of the White House.

In the 6,000 word profile, Biden is described in saccharine terms: 'a joy multiplier,' 'a goddess,' 'driven, tireless, effortlessly popular, but also someone who reminds us of ourselves,' and 'a very stylish person who even in jeans and a cashmere sweater over an untucked chambray looks totally pulled together.'

Her appearance on the cover of the magazine sees her following in the footsteps of her close friend Michelle, who posed on the front of Vogue three times during her husband Barack Obama's presidency - a point that sparked fury from Donald Trump and the Republicans, who questioned why Melania was never given the honor during her time as First Lady.

Jill's debut cover story was posted online on Tuesday morning and is devoid of any scandal or criticism. In it, Biden talks about her job as a teacher, traveling the country to tout her initiatives as First Lady, life in the White House and her marriage to President Joe Biden - who also gave a few quotes to the publication about how the couple has adapted to their new roles.

There is a scant mention of one fashion incident: when Jill wore patterned stockings on the way home from a trip to California in April - a move that sparked a Twitter war over her choice in leg wear.

'It's amazing how much people pay attention to every little detail,' she said, adding: 'And they weren't fishnets. They weren't lace. They were very pretty stockings.'

The East Wing won't detail the designer of the clothes Jill Biden wears and the first lady barely discussed fashion in the piece.

'I like to choose from a diverse group of designers. When I was planning my Inauguration outfits, that's one of the things I considered,' she said.

'It's kind of surprising, I think, how much commentary is made about what I wear or if I put my hair in a scrunchie. I put my hair up! Or the stocking thing,' she noted.

Elizabeth Alexander, her communications director, told Vogue that Biden doesn't work with a stylist, insisting: 'It's all her.'

However, the First Lady did get some fashion assistance for her cover shoot in the form of Sustainability Editor and fashion director Tonne Goodman, who styled her for the magazine spread, which sees Jill modeling more than $9,000 worth of high-end designs.

The profile details Biden's work as a teacher - she's a professor at a community college in Northern Virginia - and her work as First Lady, particularly her travels across the country to talk about her Joining Forces initiative, her work on education issues, her touting of the American Rescue Plan and her encouragement to Americans to get their COVID vaccine.

She said of her decision to keep teaching while embracing her role in the White House: 'Why not? You make things happen, right?'

Biden is notorious for sticking to her teaching schedule even on the road where events will be delayed until the afternoon so she can teach via Zoom in the mornings. She grades papers on her Air Force plane, known as Executive One Foxtrot, while she travels.

Jonathan Van Meter, who wrote the piece and has previously profiled Biden, traveled with the First Lady on several trips and then joined both Bidens on another.

He describes traveling to Virginia with the first couple for an education event where President Biden stopped the motorcade to greet a group of children waiting outside the school they had visited, while his wife watched on: 'He embraces the child as Jill lingers on the macadam behind him in black-and-white stilettos, looking every inch a goddess at 69.

'It's moments like this with the Bidens - hugging children! - that bring home just how incomprehensibly irregular and out of place our previous president and first lady really were.'

President Biden - who posed for Leibovitz alongside Jill on the patio outside the Oval Office - also gave several glowing quotes to the publication about his wife of 44 years, telling Vogue: 'It was clear to me that she knew exactly what she would do if she were first lady. And so she came in, I think - knowing the experience of being vice president, knowing the power of the presidency - knowing that she could change things.'

Only the best #FLOTUS's deserve to be on the cover of Vogue! Not the one's Who Really Don't Care! Vogue will never disgrace themselves with less than!#DemVoice1https://t.co/TbN6l5LjOAhttps://t.co/3blAO79Q4y

He did concede however that moving into the White House has affected their marriage, admitting that the couple do not get the chance to spend as much 'romantic time' together as either of them would like.

'When we were living in Delaware and married, once a month we'd just go up to a local bed-and-breakfast by ourselves, to make sure we had a romantic time to just get away and hang out with each other.'

Jill agreed with her husband, explaining that they have both had to 'try a little harder to make time for one another', although she noted that they remain committed to eating dinner together, during which they both put their phones away.

'Even the thing about having dinner together: Sometimes we eat on the balcony; last night we ate in the yellow Oval, upstairs,' she continued.

'It's just part of the day that we set apart, and we still light the candles, still have the conversations, still put the phones away.'

The Bidens were photographed together for the piece, on a patio in the Rose Garden outside the Oval Office. In that pic, Jill wears a $1,390 green skirt and a matching $695 sweater, both from Michael Kors Collection.

Jill was also photographed in the East Sitting Hall of the White House, working on an Apple laptop and wearing a Ralph Lauren blouse, which retails for $1,290, and skirt, which sells for $2,990.

Part of Biden's interview with the magazine took place in the White House Rose Garden, which was returned to its Bunny Mellon-designed roots by Jill's predecessor Melania Trump in 2020. Trump was heavily criticized for her redesign of the famous garden.

Van Meter tells Biden in their interview: 'Everyone got so bent out of shape over Melania redoing the Rose Garden, but I think she made it better.'

Jill, in response, noted the multitude of roses that blossomed and said of Trump:  'Apparently she put in these walkways. Are these, like, some of the most beautiful roses you've ever seen?'

Melania, notably, was not given a Vogue cover, nor a shoot in its pages, during her time as First Lady - a distinction that was afforded to her predecessor Michelle on three occasions, first in February 2009, less than a month after President Obama's inauguration, then again in 2013, and finally in November 2016.

Although the only other First Lady to appear on the cover before Michelle was Hillary Clinton in 1998, a shoot inside the magazine's pages had become something of a tradition for Presidents' wives that began with Lou Henry Hoover in 1929.

Vice President Kamala Harris has also already earned her first Vogue cover, which was revealed to the world days before the inauguration in January.

Melania's absence from the publication, along with the US's other major glossy magazines, sparked fury from Trump and the Republicans throughout his presidency and on Christmas Day, he blasted them for failing to give his wife a cover, despite the fact that her predecessor Michelle was featured on 12 covers during her eight years in the White House.

Weeks before he was due to leave the White House, the then-President made his outrage known by tweeting a comment from right-wing publication Breitbart, which called out the ‘elitist snobs in the fashion press’ with Trump adding that Melania is ‘the greatest of all time’ and blasting the magazines as 'fake news'.

Melania’s absence as a cover star was keenly felt by the President who often commented that his wife was overlooked, particularly when compared to Michelle, who landed cover shoots with a host of magazines, including Glamour, Elle, O The Oprah Magazine, and Essence.

Mrs. Trump did once feature on the cover of Vogue, back in 2005 shortly after she married the billionaire, however Anna Wintour - who has been outspoken in her criticism of Trump and his administration - suggested in 2019 that she would not feature her again, telling Christiane Amanpour: 'Those of us that work at Conde Nast believe that you have to stand up for what you believe in and you have to take a point of view.'

Melania's spokesperson Stephanie Grisham then hit back, insisting that being 'on the cover of Vogue doesn't define Mrs. Trump', adding that she had 'been there, done that long before she was First Lady'.

In Vogue's cover story about Jill, the former First Lady and her husband were mentioned only a couple of times - with Melania's work in the Rose Garden serving as the only favorable quote about the Trumps. Elsewhere, they were referenced only in order to heap further praise upon the Bidens by comparing their work in the White House to their predecessors.

At one point, the piece compliments Biden for being 'boring', noting that there were 'countless editorials' written to mark the first 100 days of the new administration, 'many' of which 'expressed surprised relief over how much work was getting done' and over 'how little drama, how few flubs or fumbles or ugly fights' there had been.

Jill herself described her husband as a 'calmer President' who has 'lowered the temperature'.

Speaking of her own goals for life in the White House, the First Lady said that she hopes to make it as comfortable as their vacation home in Rehoboth Beach, Delaware. The Bidens bought the 4,786-square-foot home in 2017 for $2.74 million.

'I want the White House to feel comfortable. It's like my beach house, where you feel like you can just come in, and your bathing suit is sandy, but it's okay to sit down on the chair. I want people to feel that way, that they're comfortable, that it's their house. Not like, 'Oh, I can't touch this,'' she said.

She also frets if the president will have time to get to their vacation home. 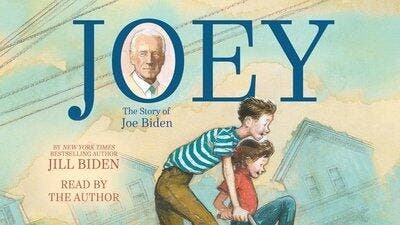 Jill Biden Gives Baby Wilfred a Copy of a Book She Wrote About Young Joe!

'I think it's going to be a lot harder for him. I don't know. It's just harder. I don't know how he could actually go on the beach,' she says.

The Bidens have only made one trip as a couple to the beach home since he became president - when they spent the night there in early June for Jill Biden's 70th birthday.