This August 2020 featured the launch of the inaugural edition of the Amman International Film Festival. The festival included drive in movie showings and outside theater showings that were on most days attended in full with the online booking stating “sold out” next to the majority of the films.

Amidst unusual circumstances, where travel is banned and rules of social distancing apply, the festival managed to screen over 39 films in the open air. The closing ceremony was patronized by Princess Rim Al-Ali president of the festival and the Royal Film Commission Board of Trustees, who also attended the opening with her husband Prince Ali Bin Al-Hussein.

The distinctive edge of this Festival lies in the recognition of various talents involved in the making of a film: direction, script-writing, editing, photography and acting.

The competitive section was reserved to Arab filmmakers and included feature-length narratives and documentaries, as well as shorts. A non-competitive international section showcased debut films from all over the world. In addition to screenings, a program of film industry events including master classes, seminars, pitching sessions and discussions with directors and film-stars were held.

Due to the inability to travel to Amman, almost all the directors of the films featured in the festival recorded video messages, addressing the audience, that were played before the showings of their films, while some even participated in live online video discussions on certain aspects in cinema creation.

At the awards ceremony, the Juries – made up of Jordanian, Arab and international professionals – announced the winners in recorded statements, followed by the screening of “Luxor” by the Jordanian-British director Zeina Durra. The ceremony was presented by the Jordanian artist Zain Awad and livestreamed on the Facebook page of the Festival.

The Black Iris trophy and emblem of the festival was designed and created by Jordan’s top modern art pioneer Muhanna Durra. The festival did not forget to pay special tribute to international film score creator “El Maestro” Ennio Morricone through playing his music from famous films before the film screenings each night with a special mention of the late artist who passed away this year.

The Festival was also able to grant support of over 250,000 Jordanian Dinars to 26 film and television production projects.

The jury, composed of Srdan Golubovic, Saba Mubarak and Sarim Fassi-Fihri, granted the Black Iris Award for Best Arab Feature Narrative Film, along with a cash award of US $20,000, to You Will Die at Twenty by the Sudanese director Amjad Abu Alala. A Special Mention in the same category went to the Saudi Film Last Visit by Abdulmohsen Aldhabaan. 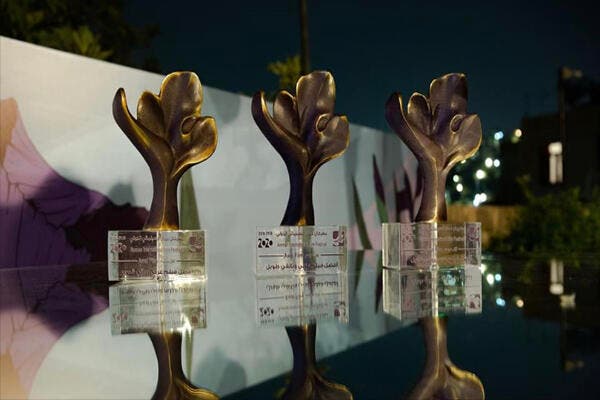 In the Documentary section, the Black Iris Award for Best Arab Documentary went to Ibrahim, a Fate to Define by Lina Alabed. The Jury was headed by Andrea Luka Zimmerman and including Mahmoud Al Massad and Nadia Kamel. The Palestinian director received a cash award of $15,000, in addition to the Black Iris trophy.

The Egyptian documentary The Profession by Ramez Youssef received the Jury’s Special Mention for its “very daring topic, leading us to the hidden world, into the depths of society through the belly dance profession that is very hard to reach.”

Huda, a Jordanian short film directed by the first-time director May Al-Ghouti, got The Black Iris Award for Best Arab Short and received the cash prize of $5,000.

The Special Mention in the same category went to the Iraqi Short Soul Return by Muhannad Al-Tayeb. Soul Return as the Jury said “is a film that beautifully and hauntingly reflects the horrors of war. The message of this thoughtful film reminds us of the power of short-form storytelling.”

The audience voted for its favorite international film, made by a first-time director. Gaza, a 2019 documentary by Irish filmmakers Garry Keane and Andrew McConnell and portraying the everyday life of Gazan citizens was granted an award of $5,000 in addition to the Bronze trophy. 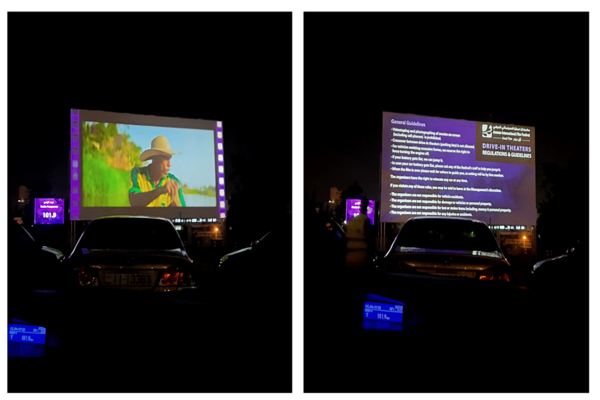 Drive In screenings in Abdalli area. Photos by Al Bawaba.

The Royal film Commission (RFC), the main organizer of the festival, has stated that the

The Jordanian small, but vibrant, local film industry has begun to show what it can do, with talented directors winning international acclaim with features such as “Captain Abu Raed”, “Theeb”, “The Last Friday”, “When Monaliza Smiled”, “3000 Nights” and “Blessed Benefit.”

On the other hand, Jordan is already firmly on the map as a filming location for foreign filmmakers, who choose to film in the Kingdom for its diverse landscapes, ancient heritage, urban mix, easy procedures and government support.

Movie-goers have been watching scenes filmed in Jordan at least since “Lawrence of Arabia“ hit the big screen in 1962. In more recent years, the country has provided compelling locations for numerous international award-winning movies including “Indiana Jones and the Last Crusade“, “Star Wars: Episode IX“, “Aladdin“, “The Martian ” and “The Hurt Locker.“

The festival’s first edition was indeed a great success for Jordan; in terms of quality of films and great film makers participating as well as organization of all aspects of the festival. Hopefully next year if there are no travel restrictions, the festival can make Jordan a main destination on the international festivals map, for people to visit Jordan and attend the festival in person from every part in the world.

Shoug Al-Hadi Gets Rushed to The Hospital (Pictures)